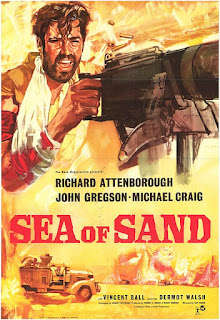 Although Richard Attenborough gets top billing, this is actually a very good ensemble piece. And the actors I didn't recognise were every bit as good as those I did. 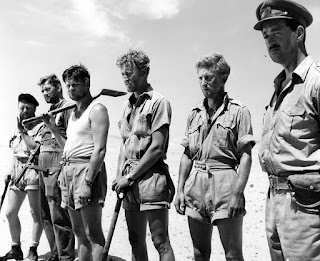 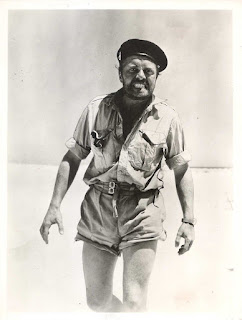 A scary apparition emerges from the desert...

I only recognised Attenborough, who plays the cockney character Brody, and Percy Herbert, who plays a character called 'Blanco' White. It's actually White that's depicted on the (rather cool) cover illustration for this particular edition of the DVD, manning the machine-gun 'neath some netting, as 'Jerry' advances across the titular 'sea of sand'. I didn't recognise either Michael Craig, nor John Gregson, who play the two Captains, Cotton and Williams, respectively, leading the mission. 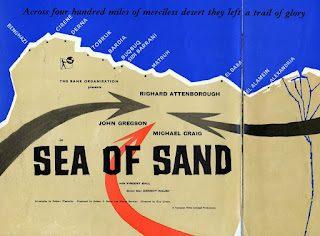 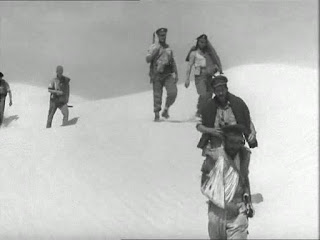 Trudging across the burning sea of sand.

The mission itself is to blow up a behind-the-lines fuel dump, and the unit is the LRDG, or Long Range Desert Group, to whom the movie is dedicated. War movie anoraks like me will bemoan the inaccurate arms and materiél. Those American half-tracks look nothing like the SdKfz 251s they're probably standing in for.

Such inaccuracies also add to the fudging of a theme that occurs several times in the film, and no doubt happened for real as well, when our chaps pass themselves off as Germans by the rather overly simplistic means of Cotton donning an M43 Feldmutz! 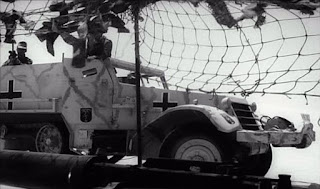 The DAK did use captured materiél, but this smacks of expediency. 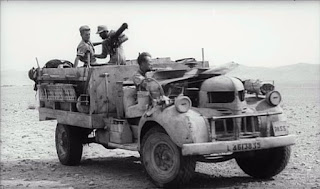 This Dodge looks rather more convincing.

Despite stepping on a few WWII cliché land-mines, this remains a very solid and enjoyable film. The mission is a tough one, and a lot goes wrong, causing one soldier to speculate on the presence of a 'Jonah' in their midst. But English pluck wins through, albeit not for all concerned. Not the greatest war film ever, and neither the most historically faithful nor the most hamfistedly patriotic, Sea of Sand is simply a very enjoyable boys-own adventure yarn. 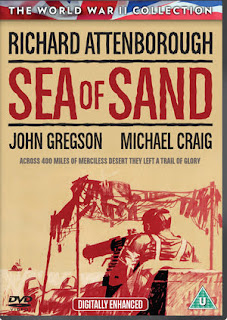 * What charm this has it owes to the vintage image that's been recycled for the artwork.
Posted by Seb Palmer at 11:48