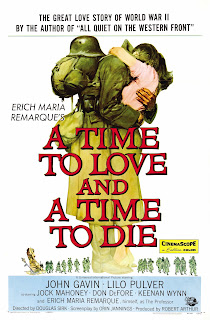 A Time To Love And A Time To Die is one of a very small group of American films made during the 1950s, i.e. only very shortly after WWII itself, that explore the human side of the German experience of that epic conflict. 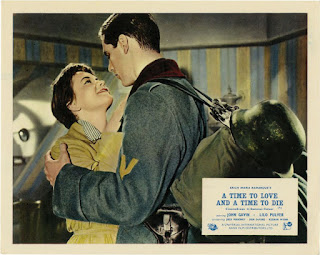 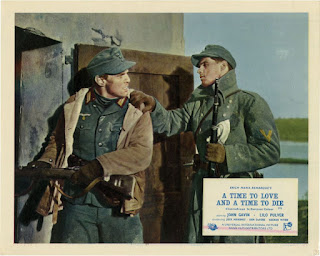 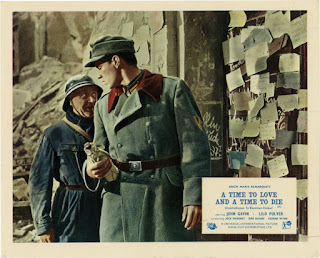 Both depict decent young Germans as central characters, and both find these men back in Germany, struggling to reconcile their consciences with their roles in the war, and their relationships to the Fatherland and it's peoples. This film is based on a book of the same name by German author Erich Maria Remarcque (of All Quiet On The Western Front fame*), and director Douglas Sirk was himself also of German extraction, so it has a personal resonance for two of the key figures behind it. 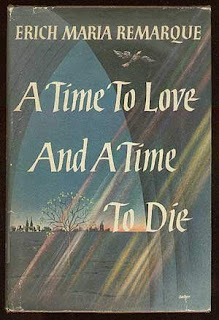 A somber looking version of the book. 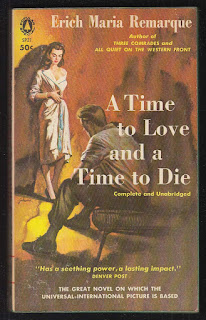 Despite their roles in the making of the film, which one hopes bring some authenticity to it, I found the choice of male lead, Frank Gavin, who plays German soldier Ernst Graeber, rather problematic. Decision Before Dawn's Oscar Werner was both actually German, and an excellent actor, making for a very convincing character. I found Gavin too hammy and all-American (he's actually of Hispanic/Latin-American extraction) to be very plausible. I was more than half expecting him to blurt out, 'Gee, ain't the Fatherland swell, baby!' at some point.

Having said this, both films explore in different ways the moral compromises and complexities facing basically decent young men fighting on behalf of a toxic ideology. In Sirk's movie this theme ought perhaps to feel even more central, inasmuch as the film starts and ends in that infernal crucible of the Nazi quest for 'lebensraum' (a horrifically ironic misnomer, as it transpired, in that it was always as much charnel-house as living space), the Eastern or Russian Front. 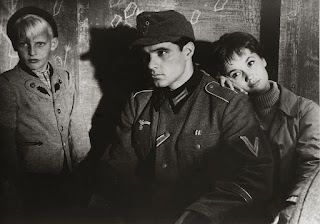 It's really only the poignancy of this thread that prevents this film from being somewhat cornball, thanks to the rather hammy home-front roles of several chief actors, including Gavin himself, and his female opposite lead and love-interest, Lisalotte Pulver, a Swiss actress who was at least a star of German cinema of that era.

Amidst the ruins of the German homeland we see how civilians cope or go under, and the paranoia of the regime is evoked (the nosey conformist 'house-frau' is suitably repellent). We even meet a Jew in hiding, who's temporarily sheltered by Professor Pohl, played by Erich Maria Remarque himself, whose conscientious behaviour has predictable results.

There's not much Ostfront war footage...

The ending is sad but predictable, and whilst it helps make one of the films central points, about the senseless waste of war (another thing it has in common with Decision Before Dawn), it still feels less convincing or weighty than perhaps it wants to.

When the credits rolled I must confess I felt somewhat disappointed by this film, especially as it's packaged and marketed by Eureka as part of their Masters of Cinema line, and would have given it just three balkenkreuz. However, in the course of writing this review I begin to think that, whilst Sirk's melodramatic style and the Yankee-doodle feel of some of the acting seem at odds with the subject, it is an interesting if uneven film, and worth watching. 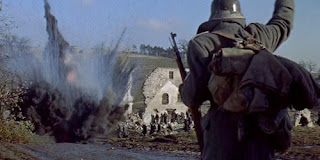 Graeber is a principled grunt, going back to the front...

... whilst others play a morally looser game.

* As a result this film was sometimes referred to as All Quiet On The Eastern Front!

PS - In addition to the author making a cameo, it's interesting that Klaus Kinski also has cameos in both Decision Before Dawn and this film.
Posted by Seb Palmer at 17:34