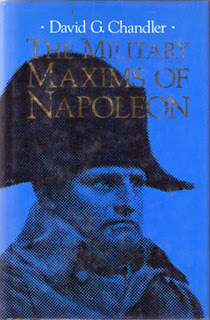 This small hardback collects together 78 (I think?) maxims, of the man so often described, as indeed he is on the dust jacket blurb of this book, as 'history's greatest military commander'.

But, as noted by W. E. Cairnes in his introduction to the 1901 edition of this collection 'Napoleon ... frequently violated his own maxims, sometimes with success, sometimes with disastrous results.' Maxim XVI, for example, finds him pointing out that one shouldn't do what he did at Waterloo or Borodino: 'A field of battle ... which he [the enemy] has previously studied and reconnoitred, should be avoided', and 'never attack a position in front which you can gain by turning'. 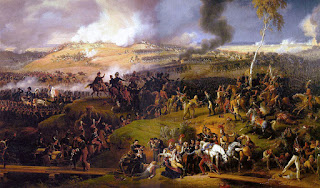 Borodino, as pictured by Lejeune.

But as Cairnes points out at another point in his intro, Napoleon's military genius was such he could as often achieve victory by burning the rule book as by following it. But it is perhaps sobering to note that where he went wrong he was usually contravening one or more of his own states principles. Napoleon himself also once said, and his own martial career proved him right, that great military leaders usually have a limited shelf-life, in terms of unmitigated success. 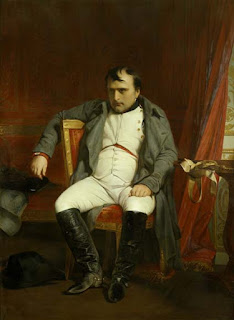 The older Napoleon. Past his use-by date?

The maxims the themself are pithy and intriguing, and nicely presented in this edition (as pictured at the top of this post). Cairnes' turn of the century reflections - he looks at the then recent history of the Boer War through the lense of Boney's ideas - are also very intriguing. Chandler's intro is, one might say (a tad cynically, perhaps?), rather cursory, and possibly just an excuse to get his name on yet another interesting Napoleonic dust-jacket.

Although this is a lot less in-depth, nevertheless, I found it a lot easier to read and generally more satisfying than Jay Luvaas' ostensibly or potentially similar Napoleon On The Art Of War.
Posted by Seb Palmer at 13:01