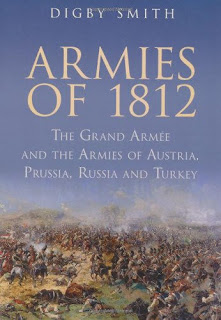 NB: The pictures I've illustrated this piece with are not from the book under review.

If you're really interested in Napoleon's invasion of Russia, and I mean really interested, then this book certainly has a lot of detail about the armies involved in that monumental conflict. Well, some of the armies; the vast bulk of the weight of information is very heavily biased towards Napoleon's Grande Armée. Compared with the French army, even their main adversaries in this conflict, the Russians, aren't dealt with in such a thorough way.

This is a shame, but there are two factors relevant to this, most people (at least in Western Europe and the U.S.) are probably - or traditionally have been - more interested in the French contingent, and the French records have survived in better condition, and were probably always better maintained in the first place (it appears the cannon fodder of post-revolutionary France at least merited better record keeping than the expendable hordes of Russian serfdom!). And the Turkish section really is wafer thin, dealing with the subject in just two pages of text, and a mere two plates! 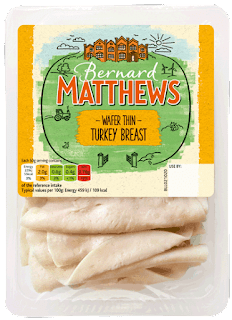 Despite the almost scarily obsessive level of interest in minutiae, there are areas where the book falls down, at least in terms of what I wanted from it: sometimes Smith gives the composition of units in preface to uniform detail, and sometimes he doesn't (consistency on this front would've been desirable), and the 'Orders of Battle' are too generalised. Given the level of detail in some areas, it seems odd and a shame that each individual battle doesn't list the exact breakdown of forces involved, where known. One could perhaps reconstruct the composition of forces at particular battles from the info contained in the book, but I think it'd be a lot of hard work. 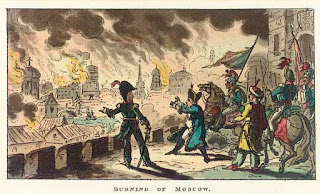 The book is full of maps, including interesting ones that show the progress (and degeneration) of each of the French Corps, and there's a copiously richly illustrated middle section, with loads of wonderful uniform plates, reproduced in very decent quality, albeit much smaller than the originals. This latter point leads to another oddity re the proofing of the book: Smith frequently asks that you 'note such-and-such', regarding unifrom details in a given illustration, although evidently these authorial admonitions weren't proofed against the actual book, in which most of the details he's referring to are invisible due to the prints being much reduced from the originals. Still, they're beautiful and useful to those who need to know this sort of thing. But, if it's Napoleonic uniforms you're into, there are other better primarily visual sources, like, for the French (albeit not specifically in reference to the 1812 campaign alone), the jaw-droppingly rich and comprehensive book of Rousselot plates Napoleon's Army 1790-1815. 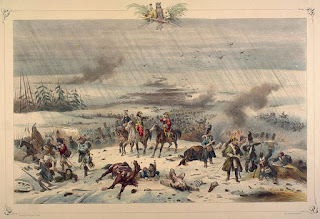 A more sober view of events. 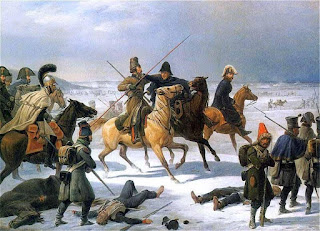 This one's even good for uniform ref.

I'd imagine this book is way too narrow in it's focus for the general reader tho', and an example of this is the way the index is organised: lists of units and military personnel are the only things listed! I have to say I thought this was a serious shortcoming - What about being able to look up particular battles for example? If you want to do this, you'll have to spend ages scanning the pages - but then it does fit into the scheme suggested by the book title. So, the focus really is on the armies, not the battles, campaigns, locations, politics, tactics or anything else.

There is a synopsis of the campaign, which is useful to have within the book, but it doesn't add much to the scholarship on this exhaustively treated subject (even within Smith/von Pivka's own writings*). There are also more than the normal share of editorial gaffes, such as illustrations wrongly labelled, grammar and other literary mistakes, some of which are just technical typos, others seemingly words wrongly typeset, or misunderstood: the book would have benefited from better editorial handling. 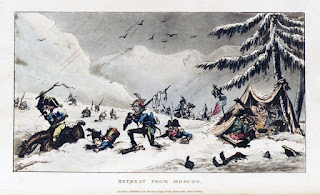 Cruikshank's view of the retreat. 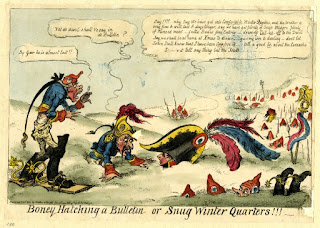 So, unless you're either a turbo-charged military buff, or a wargamer (which can often be the same thing), this isn't likely to be for you. Despite all the critical comments I've made, all of which are a fair cop if you ask me, this is a very handy book if you're someone who feels they need to know, for argument's sake, the exact composition of Ney's III Corps, and how it fared throughout the disastrous 1812 campaign.

It is in fact actually quite difficult to rate this book, because, if this is the kind of detail you're after, then this is certainly a handy resource. But it is quite uneven, and there are even some annoying shortcomings and oversights, to my mind, not to mention plain simple editorial (i.e. proof-reading, rather than authorial) mistakes. But despite all these issues, if you're borderline obsessed with things Napoleonic, as I am, you'll probably still enjoy this.

Digby Smith, as pictured at the Pen & Sword website.