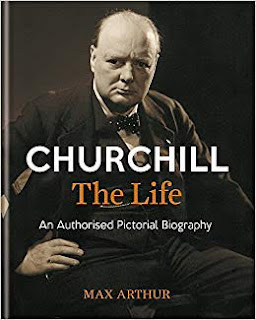 At the time I first drafted this post, I'd just seen a trailer for the movie starring Gary Oldman as Churchill (that came out in the U.K. on 16th June, 2017). I thought then that I'd post this review of a book I was given a while further back, via the Amazon Vine program. 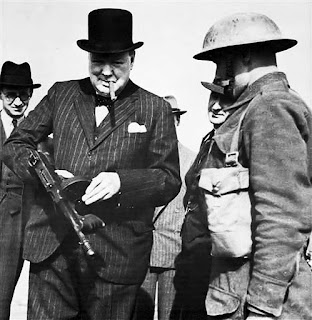 The iconic Churchill, brandishing a 'Tommy Gun', with his trademark cigar... 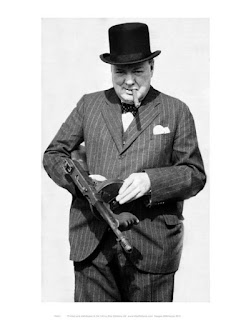 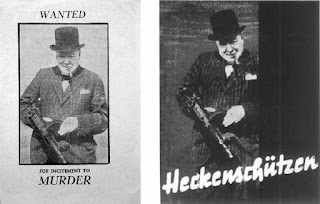 If you don't know much about one of England's greatest leaders - Attlee, his wartime deputy (and theoretically, as a lifelong Socialist, an adversary) described him as 'the greatest Englishman of our time - I think the greatest citizen of the world of our time' - this is a great way to learn more about Winston Churchill. At the time of writing my original review the price on Amazon U.K .was just over a fiver. Amazing value! (R.R.P. £25). 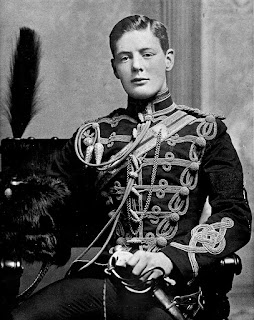 Young Churchill, dandy of the Fourth Queen's Own Hussars, 1895.

Beautifully illustrated with a huge number of photos, covering Churchill's whole life, from the a wee bairn dressed like a little dolly girl, as was the fashion of those times, through his adventures in the military and politics, to the romper-suited or machine-gun toting leader of Britain's (and his own) 'finest hour', during WWII. As well as the excellent selection of pictures, many well known, but even more that are seen less often, there are pictures of objects (dispatch boxes, favourite cigars), and lots of his correspondence. The latter material works wonderfully well to complement Max Arthur's straightforward text and all the pictures. 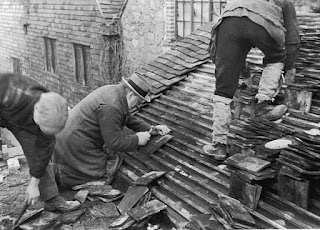 Churchill working on mending a roof at Chartwell.

Amongst these texts is one in which J.F.K. says 'he mobilized [sic] the English language and sent it into battle.' Many of Churchill's prescient insights are alluded to in this telling of his life, and his correspondence gives some flavour of his literary minded tone, and his interest in history. That he was a great orator and leader is widely known and remembered. That he was also a great writer and historian, as witnessed by his Nobel prize for literature, is sometimes forgotten [1]. Churchill himself said of T. E. Lawrence ('of Arabia') 'we shall never see his like again.' Something that could very well be said of Churchill himself. 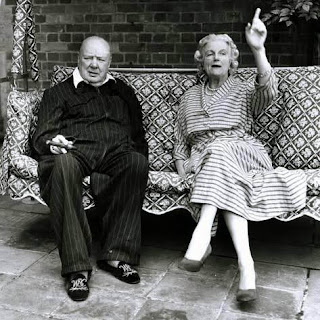 Churchill at home with his wife Clem. [2]

Certainly this is a celebration of a 'great man'. Is it hagiography? Well, it's fairly rounded, in that we hear of his less successful moments, like his Dardanelles campaign in WWI, and his time in the political wilderness between the wars (he wasn't universally popular: two images are included that refer to attacks upon him by suffragettes!). But, being an 'authorised' biography, it's not surprising that it's more celebration than critique. Nevertheless, it is very informative and enjoyable to read (there's even stuff at the back giving recommended reading and other leads to follow up). 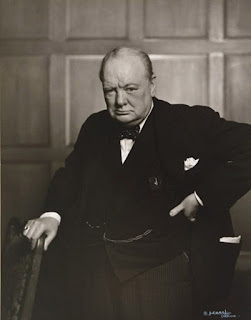 Max Arthur's approach is to describe the contents of the numerous individual pictures, contextualising what they depict in the bigger story. It's an approach that works well: I liked the story behind Yosuf Karsh's famous Dec '41 portrait of Churchill (in Canada): Winston's expression was achieved when the then relatively unknown photographer, who wanted to achieve an iconic image of Churchill without his ubiquitous cigar, finally resorted to simply plucking the cigar out of his mouth: 'he looked so belligerent he could have devoured me. It was at that instant I took the photograph.'

[1] And he was a pretty damned good artist as well! 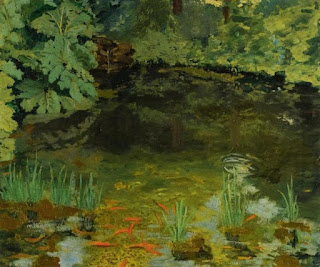 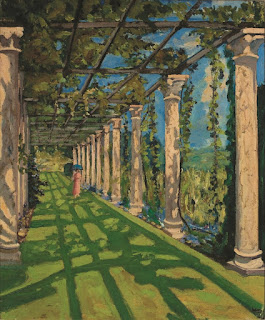 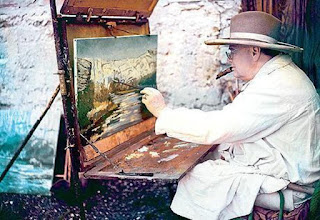 [2] Dig Winston's pinstripe romper-suit and monogrammed slippers. The guy was a class act!
Posted by Seb Palmer at 13:27