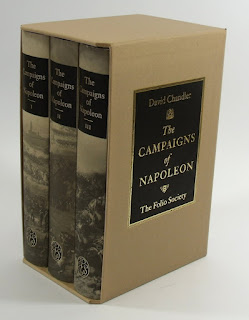 Well, this one really is an essential classic. And I'm lucky enough to own the very handsome Folio Editions trilogy, in hardback, in a nice slipcase (as pictured above). Lovely!

In the first volume one of this superb trilogy, Chandler sets the scene, telling us about Napoleon's rise, from the petit noblesse of Corsica, thought the turbulent waters of the French Revolution, to military fame in Italy. We see Bonaparte adventuring in the near 'Orient' of Egypt and Syria, before returning and assuming power in the coup of Brumaire. 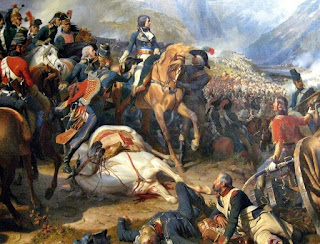 Chandler's narrative conveys his enthusiasm for his exciting and colourful subject admirably, balancing a clear passion with lucid objectivity and judicious critical insights. A good deal of space is given over to an analysis of Napoleon's early ideas, and how they evolved; where they came from, and how he put them into practice and developed them.

And this all happens surprisingly early, both before, during and following on from his Italian campaigns, showing, as Chandler notes, a precociousness and audacity that would see Napoleon's star rapidly ascend. This first part of the story/trilogy is tremendously exciting, charting the improbable but seemingly inexorable rise of the young Napoleon. It has the colour and grandeur of Greco-Roman myth, which Napoleon would've liked and appreciated.

In broad brushstroke terms this second volume starts with Ulm/Asterlitz, and ends at Borodino, thus running from late 1805 to late 1812. Here Chandler covers the 1805 campaign against Austria and Russia, culminating in Austerlitz, the 1806 war with Prussia (Jena-Auerstadt), on into the 1807 campaign in Poland against Russia (Eylau and Friedland).

He then takes a Peninsular diversion, focussing mostly, in keeping with his title, on Napoleon's part in this theatre; from his 'ill considered decision to intervene in Spanish affairs', deputising to oft-incompetent subordinates, to his brief but effective personal intervention in the war itself, before returning to more central-European affairs, with the campaign against Austria in 1809. 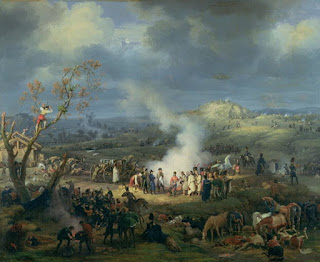 Napoleon visiting the bivouacs, in the eve of Austerlitz.

One thing that struck me in all this was, well... no, two things really, were: firstly how minor the Spanish business seems in the larger picture, even though it would ultimately prove, as the suppurating 'Spanish Ulcer', a decisive contributory factor in Napoleon's downfall (a fact not so easily appreciated from the British perspective, with our tendency to obsess over our part in these wars).  And secondly, that for all the talk of continual or 'total' war [1], there are large periods of relative peace within the bulk of the territories under the Imperial jurisdiction.

For example, between the end of volume one, and the start of volume two, or roughly 1802-1805 [2]. And, excepting the ongoing rumblings of the Peninsular, between 1809 and 1812 [3], when the narrative jumps from Wagram and the treaty Pressburg to the invasion of Russia. The latter debacle ends part two, and marks a foreboding and decisive end to the period of Napoleon's almost unassailable ascendency, and, in consequence, makes for a narrative that continues to be both gripping and dramatic.

Napoleon's regrouping and rebuilding of the French and Allied armies, and his waging of the defensive campaigns of 1813, clearly excite Chandler. And he communicates his enthusiasm for this period both ably and contagiously. And then of course there's the audacious return from exile and the Hundred Days.

This is factual history with excitement levels to eclipse all but the very best fiction. Indeed, history like this is better than practically all fiction, in my opinion. If someone made up a story like this, who would believe it? Napoleon returns from Elba with barely 1,000 men. And within days he's back in Paris - this whole story is the subject of the excellent 1815, The Return of Napoleon, by Paul Britten Austin - a whirlwind of activity, as he seeks peace whilst preparing for war. Encroyable! 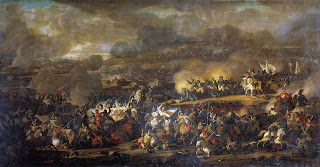 As you'd expect, Chandler's coverage of this whole exiting episode, set within the equally exciting larger epoch, strikes a perfect balance between the big picture and the smaller interesting details. Who needs or wants to read fiction, with history as exciting as this? And in how many stories -  especially 'real life' stories - is the final act a rather disappointing damp squib? Not so here. Commensurate with Napoleons own rather grandiose estimate of himself, this is a story that remains hugely exciting right to the end. And what a tragic yet epic ending it is!

Although Chandler is hardly a rank radical of the Jacobin variety, being in sober fact - as a professional military academic - far more likely to be on the conservative side of the spectrum, nevertheless, like Andrew Roberts in his turn (a more blatantly politically Conservative historian), one clearly senses the admiration, perhaps even the affection, Chandler has for his subject. And yet, again like Roberts, his excitement and awe don't cloud his judgement. We still get a balanced and critical view that gives both credit and finds fault where they are due.

All told, as I previously said in a post about a few of my favourite troilogies - of which this is most certainly one - this an epic account in every way. Being both hugely informative and great fun to read. For my money, this has to be amongst the very best and most essential writing on Napoleon's military career, a career which defined the story of Europe in the days that bear his name. 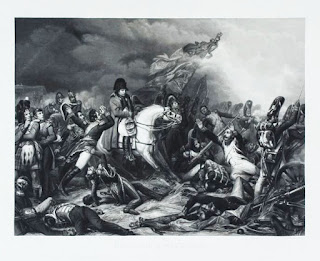 [1] I've lost track of the number of times I've read authors describing the Napoleonic Wars as a foretaste of the World Wars of the 20th Century.

[2] Interestingly, Chandler gets around a commonly glossed over aspect of historical nomenclature here by calling his work 'The Campaigns of Napoleon'. The issue arises, I guess, because - strictly speaking, and despite Napoleon's involvement - the Wars of the 1st and 2nd Coalitions come under the heading of The Revolutionary Wars, whereas those of the following [x] coalitions are the Napoleonic Wars 'proper'.

[3] These volumes are concerned, as the title makes clear, with military history. But these large eras of peace throughout the areas of French dominance deserve more study, in my view. Not just to counter the persistent image of Boney as nowt more than a bloody warmonger, but simply because they're interesting in themselves. There has certainly been study made of the general unrest that bubbled away in and across Napoleonic Europe, such as Broer's excellent Napoleon's Oher War.
Posted by Seb Palmer at 22:35