If you like Alec Guinness, and are interested in Napoleonic era history, this looks very appealing. Guinness is Capt. Crawford, commander of the Defiant, a 'hearts of oak' ship of the line. He has a new Lieutenant, the sadistic snob, Scott-Padgett (Dirk Bogarde), and his own son is also a new arrival on board, in the role of midshipman.

The odious Scott Paget: an anachronistic '60s hairdo is the least of his sins.

The film gathers together numerous interesting threads from the period: the ordinary seaman's awful lot, and the rash of unrest this was causing (the Spithead and Nore mutinies of this period are thus alluded to); the on-board politics of power, with class distinctions feeding into the brutality; the naval conflicts themselves, at this point on the cusp of the Revolutionary Wars and the fully-fledged Napoleonic era, with the British jittery about the French potentially exporting revolution across the channel. 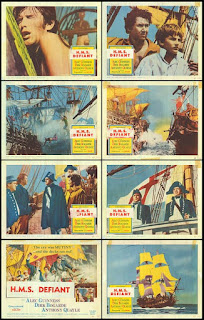 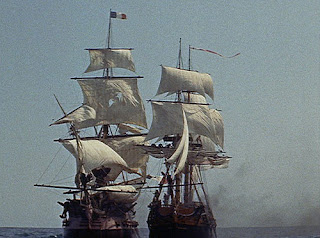 The first half of the film is mostly concerned with how Scott Padgett seeks to undermine Crawford, in part by relentlessy bullying the latter's son. But Scott-Padgett's joyless sadism is extended to all, both those 'above' and 'below' him in Navy rank; he sees himself as divinely ordained - as an aristocrat - for supremacy. Bogarde plays the role with no redeeming qualities whatsoever to soften his loathsome character. His fate seems obvious, and is a relief when it comes. 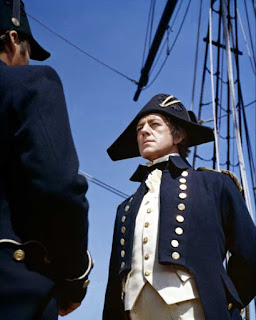 Alec Guinness... what a chap! 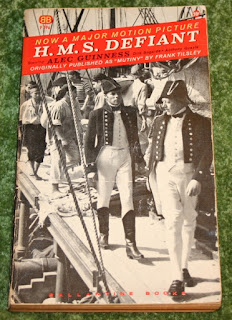 The second half of the film becomes more of a naval action drama, and as such is quite appealing. One major issue, however, is that modern filming techniques have really moved on massively, making many such scenes in older movies (films in which other aspects - all too often character development and dialogue - sometimes trump modern movies) look very dated, and more than a little lame. Many older naval movies, including this one, use models, and where this is too obvious it does detract from the suspension of disbelief. 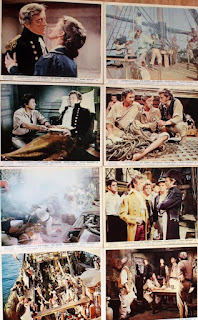 If I wasn't so mad for films depicting the history of this era, I might only give this three bicornes. It's not Guinness, or the rest of the cast for that matter, at his/their best. But as things stand, my passion for the period helps tip this over from merely being okay, to actually quite enjoying it. Not a full-on classic, but worth seeing if, like me, you like both Guinness and the era/milieu depicted.
Posted by Seb Palmer at 00:53