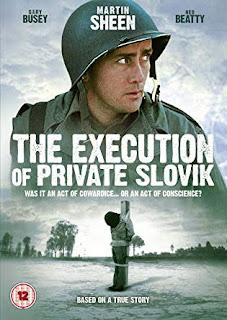 This 1974 made for TV movie* is critically lauded, and Martin Sheen won an Emmy for his performance. But, ugh... what a horrible story it tells!


As the title starkly conveys, what we have here is the sad tale of the demise of private Eddie Slovik, the first man to be execeuted by the US for desertion since the ACW. And the only American soldier executed purely for desertion - plenty more were executed, but for crimes such as rape and murder - during WWII. Frankly, it's quite depressing viewing! It's well done though, and addresses something worth remembering. 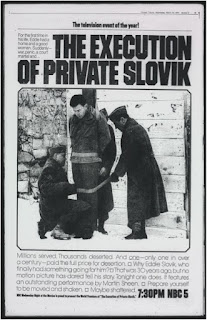 An advert for the TV movie at the time it came out. 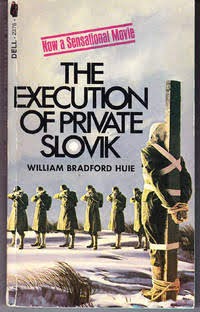 The book on which the film was based.

Martin Sheen plays the part very plausibly. One wonders how close he gets to the real Slovik, who was a former petty criminal. Whatever else he was, or had been, at this juncture Eddie Slovik is certainly one unlucky man! But then again, during wartime a lot of men (not to mention women and children) find themselves equally out of luck. And compared with the profligate brutality of Nazi Germany or Communist Russia... well, it doesn't even need any further comment.

Not light entertainment or easy viewing, but a good film about a grim subject. 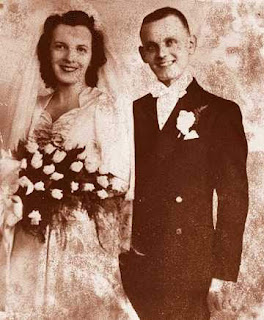 Eddie and his wife, in happier times.

* Trivia fans might be interested to know that Levinson and Link, creators of Columbo (which I love!), worked on this film.

According to Wikipedia, and I think it's also used in the film, Slovik said the following to his excecutioners: 'They're not shooting me for deserting the United States Army, thousands of guys have done that. They just need to make an example out of somebody and I'm it because I'm an ex-con. I used to steal things when I was a kid, and that's what they are shooting me for. They're shooting me for the bread and chewing gum I stole when I was 12 years old.' 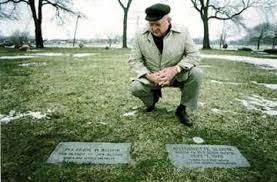 WWII veteran and fellow Pole Bernard Calka campaigned to have Slovik's remained repatriated, and interred alongside his widow's grave.
Posted by Seb Palmer at 22:13