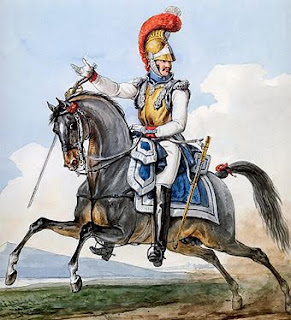 Whilst doing some picture research for my post on Paul Britten Austin's superb 1812 writings, I was looking for images of Swiss Voltigeur Jean-Marc Bussy, and failing to find any. So I settled for a couple of uniform plates, one by Knötel, and another by Carle Vernet, showing Swiss troop types that might've looked similar in appearance. 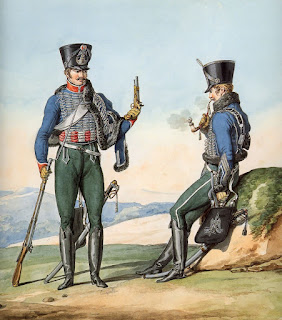 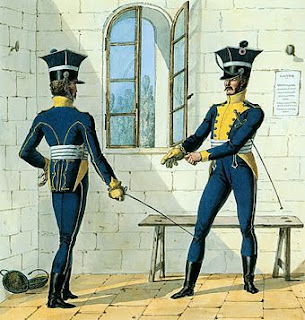 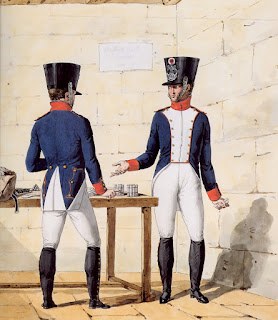 Having browsed numerous Vernet plates from this particular series online, I became aware that a complete Folio of around 245 plates had been produced. Covering the entire Grand Armée, it illustrates the new 1812 Bardin regulation uniform update, ordered by Napoleon as he campaigned in Russia. I looked longingly at originals for sale online, knowing that unless my fiscal fortunes change massively at some point, I'll not be owning such treasures any time soon.

But I did discover that there'd been a book published by the Musée de l'Armèe/Bibliothèque de l'Image, reproducing 77 of these fabulous images. I promptly found and bought a copy, via the Abe Book website, from a bookseller who turned out to be just a few miles away, in Ely. The book arrived promptly, very well packaged and in pristine condition. So I'm really chuffed. 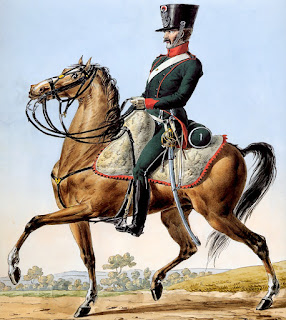 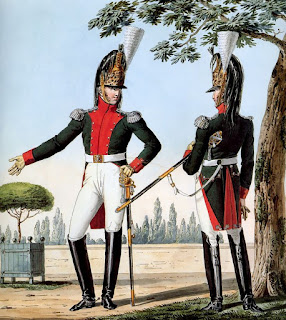 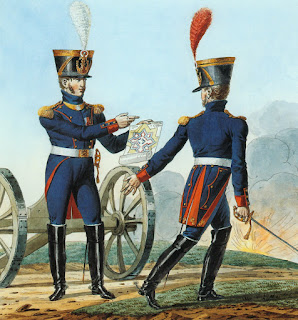 The uniforms are splendid, and the images illustrating them are gorgeous. The figures and their faces and anatomies are rendered in a style bearing the hallmarks of the Academic training of the day, with Neo-Classical profiles, and poses/gestures. Not enormously realistic, but very stylised and graceful, and totally in keeping with the peacock finery of the apparel.

Carle Vernet collaborated with Bardin in the massive project, with Bardin taking care of the technical details and Vernet supplying the artistic eye/hand. The text of this book is entirely French, and quite brief. There are no plate by plate entries elucidating the content of the individual images.* 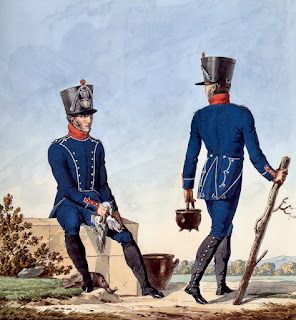 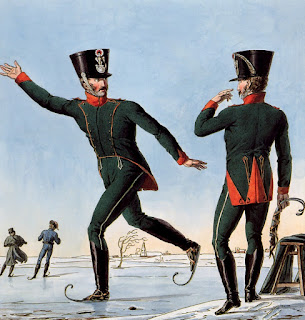 One of the many things I like about this book and the art it depicts, are the numerous little scenarios, such as the skaters, or the guys preparing a meal, above, or the Dragoons practising with wooden/whicker swords, or the line grenadiers en veste, at their bivouac, with firewood and loaves of bread, below. 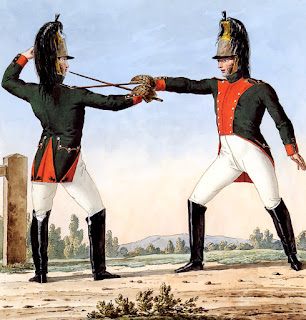 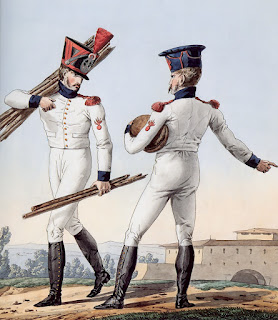 I've read in numerous places that the introduction of changes such as are commissioned and illustrated in a project like this take years to come into effect, and they often don't reach all the areas they're intended to at all. Sometimes being ignored, or sometimes being superseded by other changes. So to what degree these images reflect how Napoleon's troops actually looked over the next few years is something I'd be hesitant to pronounce on.

But as a resource for the Napoleonic buff, and even just as an object to be admired in itself, this is unquestionably a wonderful little publication. 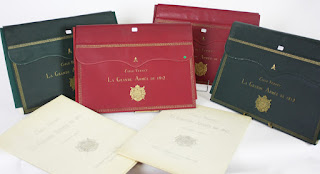 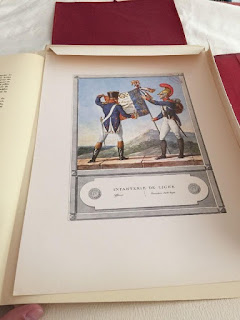 How the original plates were presented,
with info below, in a kind of 'inscription'.

* I've half a mind to try my hand at translating the text, as there's not that much of it. But whilst preparing this post I found out that Greenhill books have published an English edition of this book. Hmm? Should I get that? 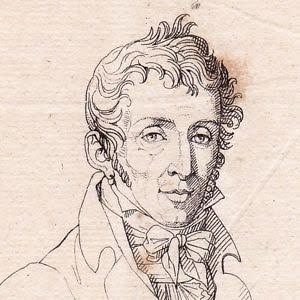