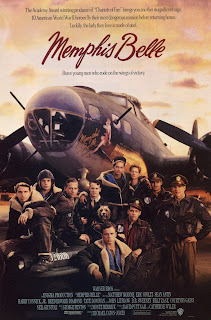 Memphis Belle is an enjoyable WWII air war film. The story concerns the 25th and final flight of the titular Memphis Belle, a B-17 bomber of the USAF, operating out of England on sorties over Europe. In this instance over a German industrial area in (I think?) Bremen. 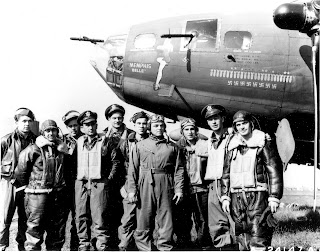 The real Memphis Belle and her crew. 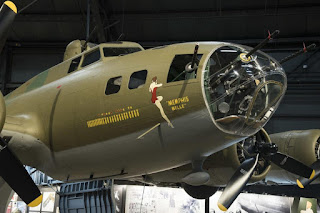 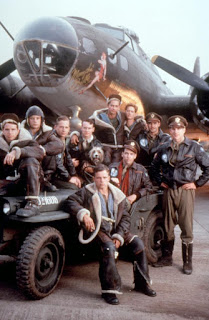 The film cast crew of the movie Memphis Belle.

Like Das Boot, which follows the fate of a U-Boat crew on one particular mission, this tells the story of one crew's experiences of one particular flight. Unlike Das Boot, however, the characters aren't quite so well developed, and the direction and special effects, whilst pretty good, aren't, as they are with Das Boot, remarkable. 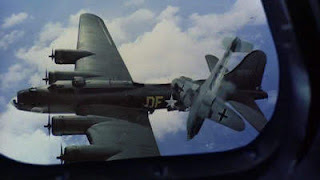 Loosely based on real events, the film doesn't stand up to too much hard scrutiny: for one thing, the real history of the crew and the Belle is not quite so clearly defined as it's presented here; and for another, as Richard Overy's enormous tome on the 'bombing war' of WWII makes very clear, aerial bombardment of the type meted out in the kind of raid depicted here was a highly inefficient 'blunt instrument', rather than the conscientious pin-point bombing that's suggested here. 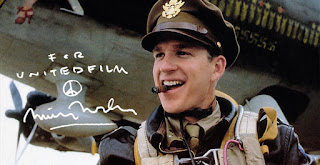 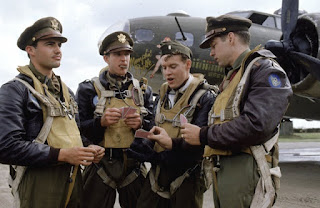 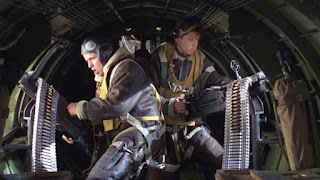 Nevertheless, this is well done in many ways, and addresses several issues worthy of our remembrance, from the human cost to the airmen involved, to the sheer magnitude of the events. And seeing so many vintage planes taking off, for example, is still both moving and breathtaking.

One of the chief strengths and, paradoxically, also weaknesses, of this film is the ensemble cast. Whilst the actors involved are all pretty good, the script and direction, whilst adequate to the job in hand, aren't top notch; this isn't exactly a 'classic'. It's a bit hammy here and there, a bit cornball, and nobody quite sparks charisma-wise like, say, Tom Hanks (and plenty more of the cast), in Saving Private Ryan. But, whilst it ain't quite a classic, it is a decent solid enjoyable WWII movie, with particular niche appeal for those interested in aerial warfare.

Jazz pianist and crooner, and occasional actor Harry Connivk Jr gets to do both his things here, playing a rear gunner, and also singing and playing piano at a base shindig. Pictured below in both roles: 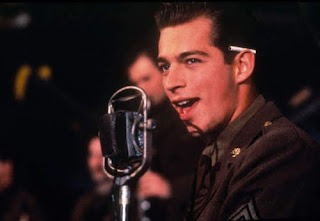 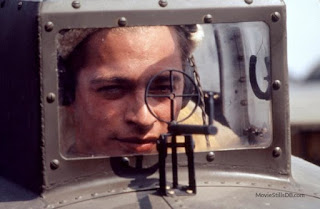 Back in the office.

The movie was produced by David Putnam, whose film production CV is impressive, including The Duellists, Chariots of Fire, The Killing Fields and The Mission. 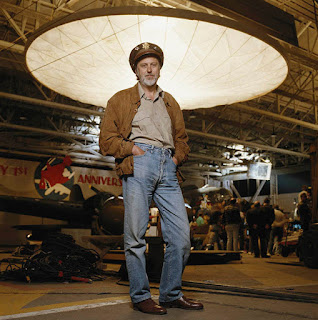