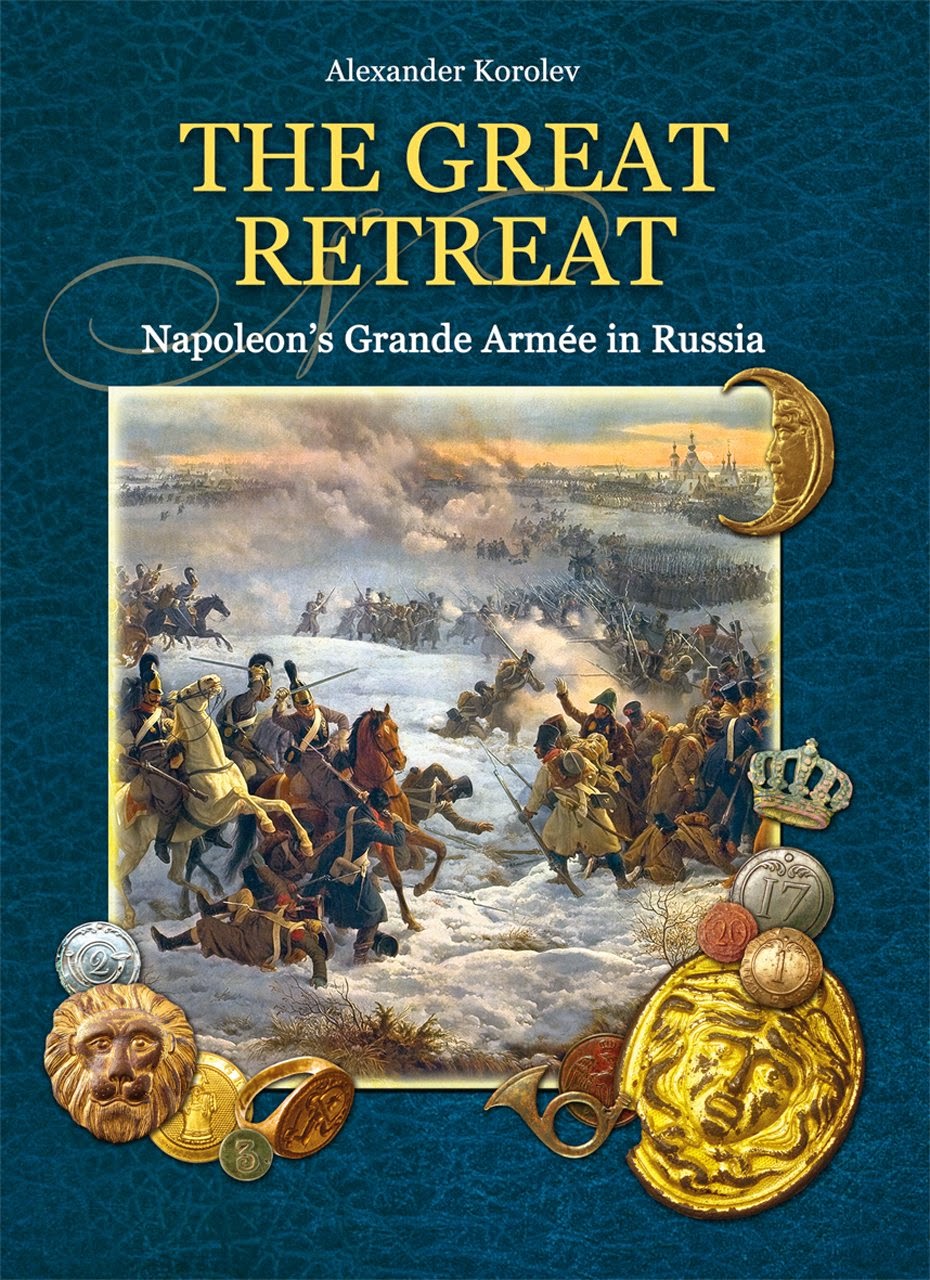 The book... a rather handsome cover, n'est pas?

A treasure trove of poignant relics and information.

Whenever I attend a wargaming show I always make a bee-line for the book stalls. Whether or not I'm going to buy any figures, terrain, paints, or whatever, I will pretty much always be buying books.

One of my chief areas of interest since my return to these areas, is Russia, 1812. And I'm beginning to amass a sizeable collection of books on this ever-fascinating subject. A surefire sign that I have tipped over into the obsessional is my latest acquisition, The Great Retreat, by Alexander Korolev, a book filled mostly with pictures of ... buttons.

As I mentioned in my recent post about the current British Museum show, Bonaparte and the British, the utterly superb series A History of the World in 100 Objects effected something of a sea-change in me, as regards what I'd hitherto ignored as rather mundane objects. Buttons would almost certainly have fallen into this category in years prior to AHOTW100. Yet when I found this book on the Ken Trotman stand at Salute, 2015, I picked it up and was immediately transfixed.

Page after page after page of well-photographed detritus from the Russian 1812 campaign is beautifully catalogued herein, all in full and glorious colour, along with information on all the pertinent units, the two threads of images and text running more or less in tandem. These parallel lines, of apparently mute artefacts and unit information that helps contextualise them, are supported by plentiful ancillary images, and even occasional extracts from contemporary accounts. 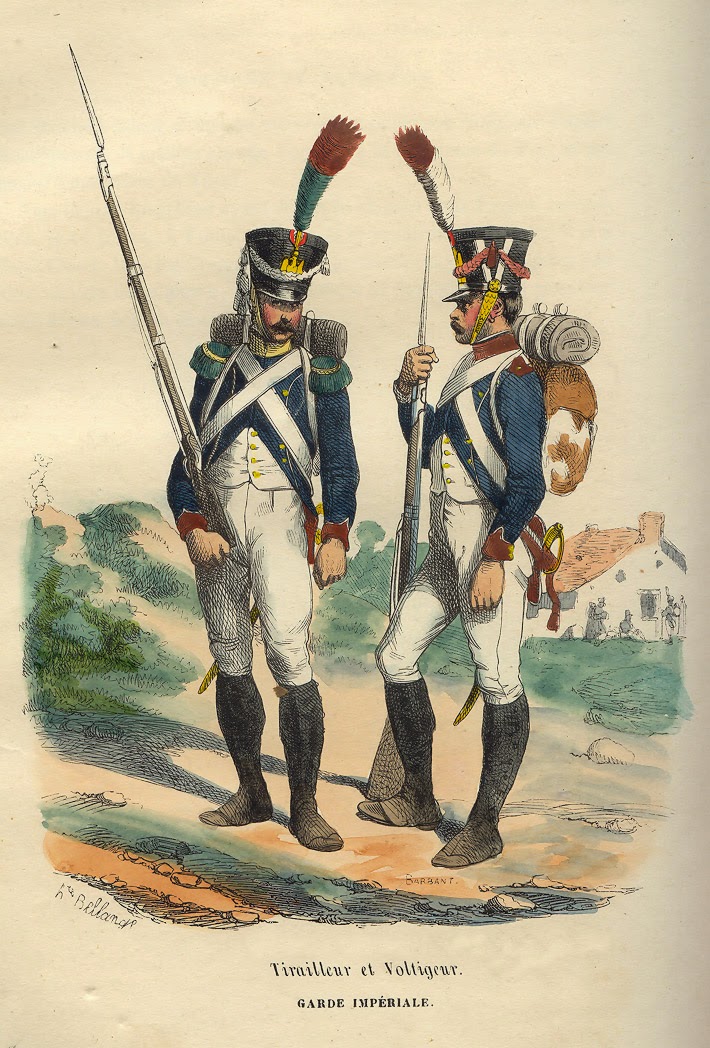 Numerous uniform plates enhance this books appeal,
including a cleaned up reproduction of this plate by
Bellange (source: wikipedia commons) [1]

Approximately 250 pages long, The Great Retreat is full to bursting with excellently reproduced colour images. I haven't counted them! The foreward and author's preface suggest that there are 2,400 images, whilst the promo blurb at the Uniform Press website mentions '1600 previously unpublished illustrations'. Unsurprisingly pretty much all of the artefacts that form the core of this incredible collection are metal, as that's what survives best buried under soil.

The commonest artefacts are buttons - lots and lots and lots of buttons - but there's plenty more besides: 'firearms and bullets, cannon and cannonballs, swords and sabres, reins and stirrups, as well as the personal items - buckles, coins, pipes, razors, and souvenirs' is how they describe the archaeological artefacts at the Uniform Press website. This is supported with '289 biographies of all the regiments and units, backed up [by] eyewitness accounts of those there.' There are also many portraits and uniform plates, plus the sundry other elements, both visual and textual, such as the detailed images of a French musket on p. 65. [2]

Another fascinating bit of information we glean in the author's preface relates to how this material was collected, during a brief window of opportunity between the fall and dissolution of the Soviet Union and some very recent Russian legislation which makes the kind of amateur treasure-hunting this collection is built upon illegal! Take a look here for an article about the finding of a mass grave in Vilnius whiuch has yielded much of interest in this line.

It was both touching and amusing to read 'This book will undoubtedly find its readership'. One almost senses the unspoken side of this statement, i.e. that this might just be too specialised to have an audience, let alone reach it! Well, I'm one of those 'amateur military history enthusiasts', who's delighted to be able to view this poignant collection of illicitly gathered contraband, which speaks so modestly and quietly about an episode of such enormous suffering.

There's almost something spooky about how this incredible collection of ostensibly mute objects can speak so eloquently not just about the retreat itself, but a whole era: not only are the units officially designated for the invasion represented, many others are to. As well as items giving concrete evidence of the presence of units one would expect to see represented archaeologically, there are many that one might not anticipate seeing.

Some of the buttons and other detritus found along the route of the Grand Armée's advance and retreat represent units that were disbanded long before the Russian campaign. Some were simply disbanded, others renumbered or re-amalgamated, whilst others belonged to previous epochs, such as Republican units, and even the odd Royalist outfit. There are even occasionally bits and bobs most likely acquired by troops campaigning elsewhere, such as ephemera from the Peninsular.

Some of these anomalous items may perhaps have been kept as souvenirs. Others, one suspects, from the tortured complexity of Napoleonic uniformology, may appear as a result of the many instances of irregular and/or outdated equipment still being in service. There were also instances of men sent from unrelated units on various grounds, such as naval artificers who joined the pontoon trains, or just odd groups of troops sent seemingly at random to make up the numbers in another unit. It all adds to the richness and complexity of an already fascinatingly Byzantine subject. 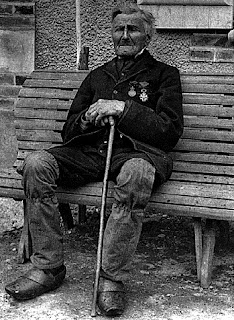 The picture above appears on page 62, and is, I think, both fabulous and quite amazing. The info given in the caption beneath the picture in The Great Retreat says when he was born and died (to the day: 9th April, 1793 - 3rd February, 1898!), but doesn't say when the pic was taken. I found the above picture on French and Italian versions of Wikipedia. The French entry tells us the picture was taken in Baillot's home town, Carisey, in 1890, making Baillot about 97 years old at that point, and around 105 when he died (assuming his birth and death dates are correct); what a long and intriguing life!

Baillot was a fresh faced conscript, about 19 years old, in 1812. If he went to Russia and survived his life story is that much more amazing: the 105th, despite being kept in the rear - advancing only as far as Vilna due to being raw young conscripts - 'starved and died ... whole detachments at a time' during the chaotic retreat. I can find no direct mention that he was in Russia in 1812, but he is alleged to have served at Waterloo, and therefore have been the last and longest living survivor of that fateful day in June, 1815. 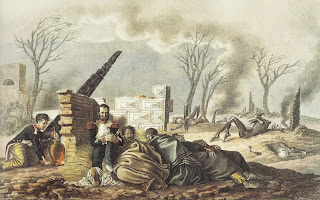 Faber du Faur's On the Main Road Between Mojaisk and Krymskoi,
18 September; an image that perhaps depicts the kind of scenario in
which the artefacts in this book wound up on Russian soil?

Almost buried (how apt!) within the exhaustive and potentially exhausting minutiae, the lists of units, troop movements and numbers, are a very few but nonetheless very interesting quotes from firsthand accounts. Some come from names readers of this episode will already know - Heinrich von Roos was a name I recognised - but one or two, such as the anonymous writer from the wagon train who laments the lack of opportunities for rest, and the impossibility of properly caring for the horses, may be new. The sad fate of the many horses lost in this campaign is quite upsetting. And whilst many (perhaps most?) descended into a state of callous self-preservation, the painting below by Albrecht Adam speaks to the fact that many saw the suffering of the horses and were, as I am when I read about it, appalled and upset. 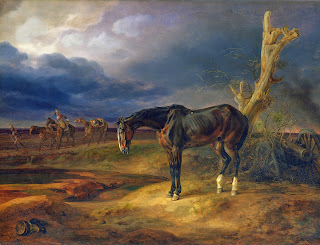 A beautiful painting of one of the countless horses abandoned
to a sad and lonely fate, by artist and veteran of the campaign
Albrecht Adam. Entitled Riderless Horse at Mojaisk.

Every arm of the massive invasion force is covered here: all the units are described, giving their origins and their particular fates during the 1812 campaign, with pertinent surviving artefacts illustrated alongside. What is an already informative resource is further enriched by portraits, uniform plates and suchlike. This obsessive rigour is extended to the numerous French allies, all of which makes this, quite literally, a treasure trove of information and visual reference material.

So, all in all, a brilliant book. Perhaps really only for those really obsessed with subject? I can only say that I love it, and would thoroughly recommend it to anyone interested in the 1812 campaign.

----------
NB - I bought my copy for £30 from the Ken Trotman stall at Salute. I've subsequently discovered that you can get it from the publishers themselves at the significantly cheaper price of £22.50. I don't know if that includes postage.

[1] The book uses a multitude of sources, listing some interesting websites, and even deigning to use Wikipedia sourced images on occasion.

[2] In the book itself there are several items reconstructed from surviving fragment of original artefacts, including one of these firearms - not the one pictured, incidentally - several of which are 'Made by Alexei Smoliakov, Smolensk.'
Posted by Seb Palmer at 08:17