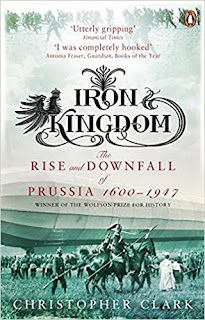 Prussia is perhaps best known to readers of military history, who will be familiar with her as a nation thanks to Frederick The Great, the Napoleonic wars, Bismarck and the Franco-Prussian war, and, of course, the two World Wars. This in itself says a lot about how we've thought of Prussia. 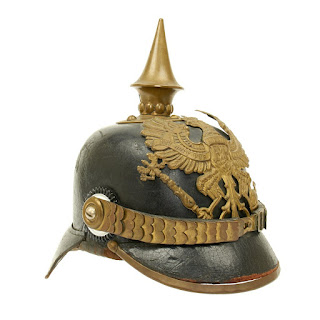 Before I get to Clark's book, I hope you'll allow me a brief digression on a very British view of Prussian culture: one of my first encounters with the classic cliché of the militaristic Prussian type came in the form of the comic film Those Magnificent Men In Their Flying Machines. The German officer in that movie, played by Gert 'Goldfinger' Frobe, was a fairly benign rendering of the stereotype, sending himself up by parping tuba type bass-lines from pompous martial music, whilst simultaneously exemplifying the vaunted 'military efficiency' of the German officer class by teaching himself to fly from a manual.

In the end his literal downfall is bought about, on one occasion at any rate, by that quintessential image of Prussian militarism, his pickelhaube helmet, the point of which bursts his balloon (during an aerial duel with a Frenchman). Behind this relatively recent iteration of the Junkers type as a harmless comical buffoon, there has long lain a much darker vision of aristocratic German elitism, whose paradoxical combination of rigid servility ('I voz only obeyink orderz' was still a comedic playground catchphrase in my childhood) and belligerent arrogance are still popularly seen as amongst the root causes of two world wars. 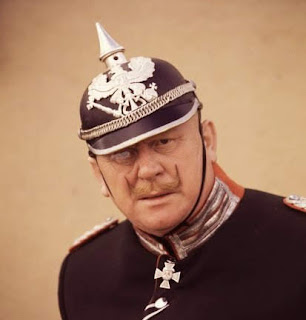 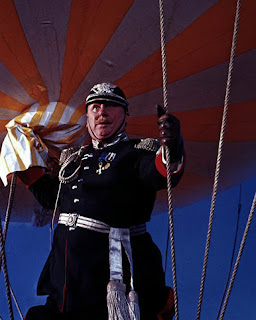 Has a pickelhaube puncture, and winds up... 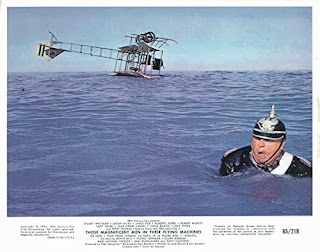 Whilst Clark makes no reference to the above-mentioned film, the character of the pickelhaube wearing 'kraut' is nevertheless much in evidence, from the amazing zeppelin-with-uhlans image on the cover, to cartoons from Simplissimus, or the image of a square-headed walrus-mustachioed Hindenberg, and throughout much of the text. But Clark's book, which at just short of 700 pages is not for those with only a passing interest, is about so much more; from Pietism and the Prussian enlightenment (Prussia was home to Hegel, and later Marx and Engels, as well as Frederick the Great, Bismarck and Hindenberg) to Prussia's dynastic dramas and personalities, and the conflicting driving forces of provincial particularism versus the desire to unify the crazy patchwork of atomised sociopolitical entities into a 'Greater Germany'.

And the book is, on the whole, all the better for this richer synthesis. Having said this, as with so many modern history books, I did find myself occasionally struggling with Clark's laudable but exhausting need to try and cover as much as possible. Adam Zamoyski addresses this issue admirably in excusing his brisk and generalising or simplifying treatment of the Congress of Vienna. Getting such a balance right must be a very difficult thing, and doubtless few authors can hope to please all their varied readers. Still, on the whole Clark does a very good job, peppering his narrative with interesting little details, as well as covering the grander arcs of events. Sometimes's the details, particularly regarding diplomacy or administration, can get a bit dry, and I did drift away from the book about midway through, ironically during the Napoleonic years (This is particularly ironic for me as it's my wide reading in Napoleonic history that lead me to buy this book). 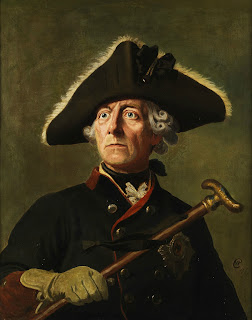 But after a brief respite I came back to it and got stuck in again. In the interlude I'd read Kershaw's single volume Hitler biog., in which he says, in the intro, that Clark suggested Hubris and Nemesis to him as titles for his full two-volume version. Clark does in fact use these titles himself, for two of his Napoleonic-era chapters. And, as with any good book, this has prompted the desire for further reading.

Amongst the many intriguing threads Frederick the Great appeals to me, both for the excitement of 'great captain' style military history, but also because he's also just generally very interesting. Amongst other things I'm very attracted to his blunt irreligiosity: Clark quotes him as saying of Christianity that it's an 'old metaphysical fiction, stuffed with ... absurdities... fanatics espoused it, intriguers pretended to be convinced by it and some imbeciles actually believed it.' Brilliant!

Right next door to Prussia, Poland is another country with a famously unstable and chequered history. During the Napoleonic era Poland ceased to exist, her neighbours, Prussia, Austria and Russia, carving her up, whilst Napoleon exploited Polish nationalism without rewarding her people with the return to nationhood they thought he might help bring about (indeed,the War of 1812 was originally talked about in the circles of France and her allies as the Polish war!).

Thanks to Prussia's role in two world wars it is the largest of the modern European powers currently erased from the map. Will she, like Poland, make an eventual return? It doesn't look very likely at present. But who really knows, perhaps at some future point the Prussian national identity will return? Based on our most recent previous historical experiences, this could potentially be a very scary development! 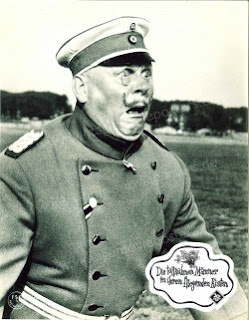 Clark avoids such speculations, contenting himself with the rich historical story. Prussia's role in unifying Germany, including her relationship with her chief rival Austria, as well as the many smaller states (such as Saxony, Bavaria and a myriad of others) during a period of escalating nationalism, is just one of the many fascinating themes he expertly explores in this book.

Whilst Clark is in many respects thoroughly academic, there are flashes of wit and style which make works such as this a little more palatable to the lay reader, such as when he observes that 'William I was ... widely revered... a figure with the gravitas and whiskers of a biblical patriarch.' But all told I found this a somewhat uneven read, compelling and even exciting in places, but sometimes a little too drily or academically thorough.

Overall, however, Iron Kingdom was rewarding and informative enough that I enjoyed and would recommend it.