Book Review: Wellington and the Fortunes of Peace, Rory Muir 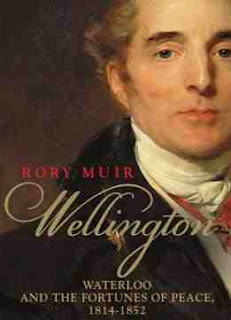 In terms of scholarship and writing quality, volume two of Rory Muir's epic Wellington is on a par with volume one, and therefore a five bicorne affair. However, I'm not convinced by his stated reasons for his choice to split the book in two before Waterloo. [1] And, although I do find some of the post Waterloo stuff interesting, by and large it's nowhere near as compelling to me as the stuff that leads up to and includes Wellington's role as Napoleon's most effective adversary. 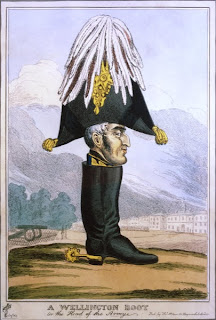 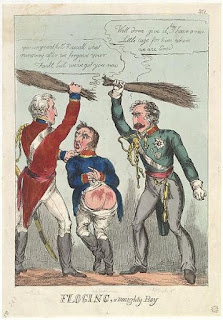 At the time of starting this review I was with Wellington in post-Waterloo occupied France. And, with the sound of the cannon of Waterloo ringing in ones ears, it's still interesting, if not quite as exciting as events up to and including June 18th, 1815. Muir has already mentioned a monument to the fallen of Waterloo that was never actually built; I wonder what coverage there might be of Capt. Siborne's travails, and Wellington's role in relation to the latter's researches, and his famous Waterloo dioramas? 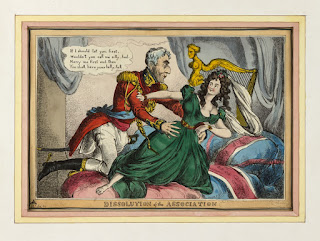 Wellington's way with the ladies and his
relations with Ireland lampooned.

----------
It's now some time later, and I'm really struggling to keep up sufficient interest in the book, in which for much of the recent narrative, e.g. about the trials, literally and metaphorically, of the government with the king and his wife, Caroline, Wellington is more or less a peripheral figure. Albeit an admittedly important and influential one. Consequently chunks of the book read more like a general history of the period, in feel, than anything specifically Wellingtonian.

Some of the topics covered, such as the Catholic Emancipation business are, I suppose, of historic interest. Although as a rational materialist I find all this religious tomfoolery worse than tiresome. And even then, to the degree in which I am interested, I'm more inclined towards enjoying such caricatures as are shown here, all three of which immediately below relate to the Catholic business, than to trudging through the arcana that Muir sedulously covers. 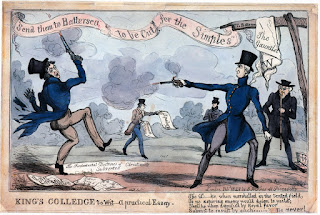 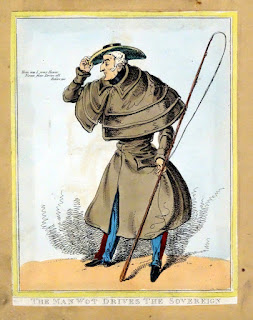 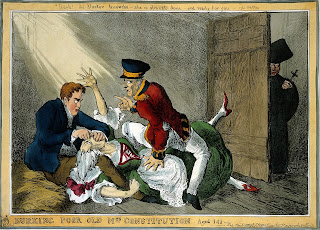 I admire Muir's obvious passion for his subject, and the amount of work he's done. And even more, perhaps, how he shares the fruits of his labours not only in commercial book form, but via his website (see below). And he obviously and unquestionably has great skill and flair as a writer. But none of this, alas, changes the fact that for me, Wellington is most interesting in relation to Napoleon. Once Napoleon disappears from the picture, it all feels a bit mundane. 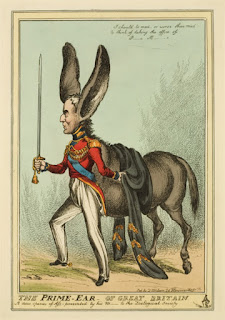 Wellington as PM, and Ass! 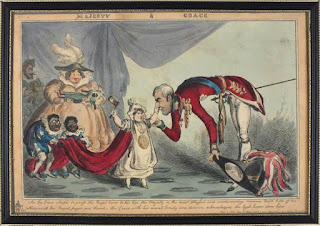 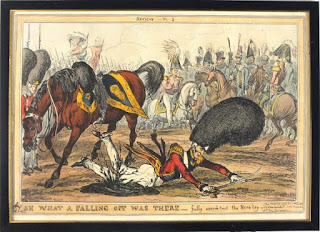 And whilst this book and the first volume help add depth and nuance to my understanding of Wellington, and show him to be above all a practical man. Nevertheless, they don't fundamentally change the view I already had, which is that in the long run I'm on the side of 'enlightenment' - not, I must make clear, with violent revolution (I'd say I'm more conservative in some ways than most capital C Conservatives) - but I do agree with Paine that 'monarchy ... is the popery of government'.

Wellington, for all his pragmatism, wasn't a fan of enlightenment thinking. He was emphatically a church and king man, and I'm most definitely neither. So, whilst I have yet to finish volume two, and can't therefore give a full and complete judgement, as things stand: I found volume one intensely enjoyable, and essential reading. Aside from Waterloo and the immediate aftermath, I find volume two significantly less interesting or compelling, and therefore certainly not essential reading. Unless, perhaps, you're a Wellington nut?

I'm not. So I'm far from certain as to whether I'll be willing to invest the time to finish this book, as excellent as it may be. 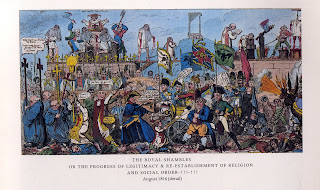 'The Royal Shambles', by Cruikshank. [5]

First of all I should mention Muir's Life of Wellington website. There's a wealth of information here, as well as links to other sources.

[1] A cynic, indeed, the cynic in me, might say - does say - that having Waterloo in part two was actually done to ensure better sales for a second volume that otherwise might not fare as well as the first, commercially.

[2] Wellington fought a duel, despite being the prime minister, with the Earl of Winchelsea, at Battersea Fields, South London, on 23rd March, 1829. I've not yet read what Muir has to say on the matter. But it's not an event that fits with the otherwise cool-headed pragmatism he describes as Wellington's normal m.o. And it was Wellington who called out Winchelsea, not vice versa.

[3] In 'Burking' Mrs C. Peel and Wellington are compared with Burke and Hare!

[5] George IV holds Wellington's sword, the latter calming the monarch, saying 'as long as you keep hold of my sword, you'll be ok', or words to that effect. I.e. the king is only able to stay in power thanks to the backing of Wellington and the army.
Posted by Seb Palmer at 16:19

Email ThisBlogThis!Share to TwitterShare to FacebookShare to Pinterest
Labels: 1815, book review, Rory Muir, Waterloo and the Fortunes of Peace, Wellington