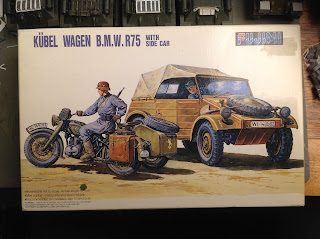 This kit was my first purchase at On Track, earlier this year. A fun little old school kit, in which the BMW R75 motorcycle and sidecar combo is probably the best element. The figures are a bit clunky, and are the weakest ekelment, with the Kübelwagen somewhere in between. The latter has separate black rubber tires. I always think that these types of wheels are better as an idea than a reality. 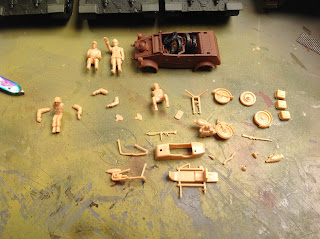 Preparing to build the motorcycle/sidecar, etc.


Somehow I managed to build the Kubelwagen without snapping any 'under construction' pics. Dang nab it! I'm confused as to how to paint it, mainly in account of the question do I paint it tyres on or tyres off? I left the roof off, and also the MG. I'm pondering how I might work on the interior a little. I've also yet to glaze the windscreen. 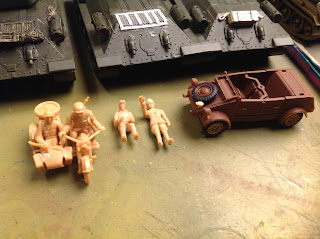 Everything assembled... ready for painting.

And bongo... all assembled, inc. driver and officer stood up doing the 'Roman' salute. The MC and sidecar combo figures have strangely malformed helmets (snicker). So, as with so much of my WWII stuff, all that remains is painting/basing.
Posted by Seb Palmer at 21:37