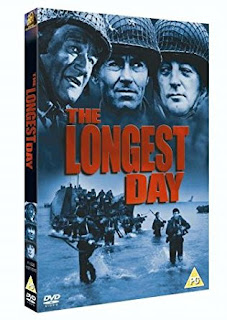 An absolute classic, exemplifying the WWII genre film in its most epic old school form. Nicely shot in black and white, which helps it look almost like wartime footage [1]. Also, the fact that all the different protagonists speak in their own proper languages, with subtitles for the audience, make this a properly executed piece of work. 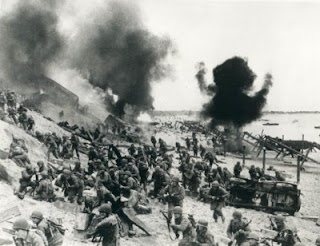 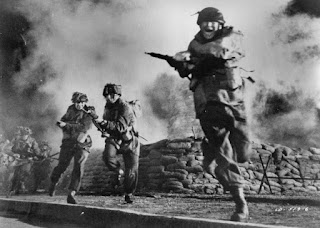 Action on the Pegasus Bridge.

Rommel superimposed on the coast.

In a pre CGI production, there are a few clunky moments, most obviously when action is superimposed over a backdrop, as in the pic of Rommel (Werner Hinz), above. But by and large everything is done on the grand scale - see above pics - and extremely well. The French attack on Ouistreham - and this is a rare WWII film in how well it addresses all the different sides, both within the Allied coalition, and their German adversaries - includes a masterful long shot (see pic. below), that looks like it must've been filmed from a tethered ballon, or something similar. 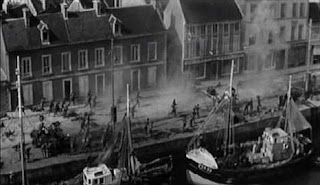 This rather paltry still was the only image of the long aerial shot of the attack on Ouistreham I could easily find. 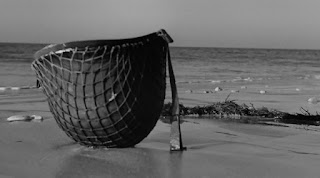 Wayne supplies some laconic exposition, prior to kick-off.

It's obvious from the credits that the production team canvassed a wide array of expert opinion, in adapting Cornelius Ryan's book of the same name (much as would later happen with another of his books, A Bridge Too Far), and have attempted to show as many threads as possible within the 178 minute time frame.

We see something of the build-up, and the tensions of anticipation, prior to the landings finally going ahead, including stuff on the important role of the weather. And we also see partisans, Free-French troops, and both American and British special forces and paras, operating behind the lines in advance of the landings. Meanwhile the Germans are beset by chaos, caused by in part by the aforementioned sabotage, plus their own ineptitude, and some plain bad luck. 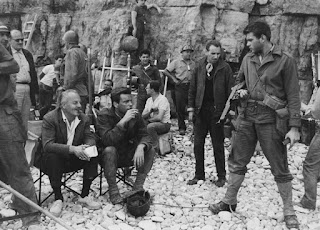 Zanuck and Robert Wagner sit and smoke on location. 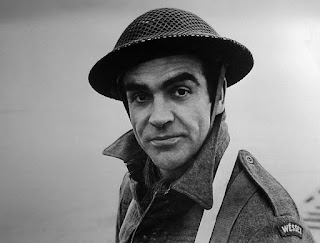 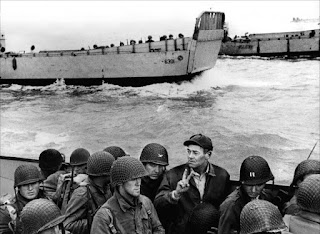 The cast is incredible, and so stellar it might be in danger of the film collapsing in a supernova of prima-donnas, but actually - perhaps due to the constrictions of what might be long for a standard film, but remains short for telling such a massive story - the many stars don't get to hog the limelight. The number of famous familiar faces is huge. Fortunately they don't distract from the overall narrative arc. 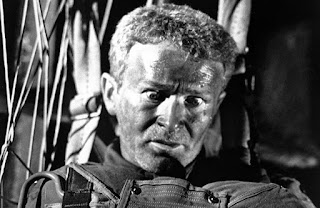 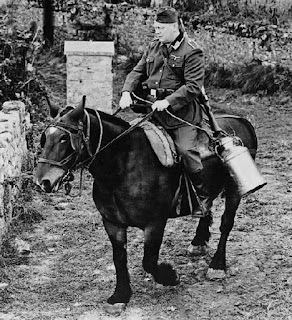 And there are also loads of enjoyable supporting roles, from lesser known actors, who nevertheless contribute to the richness of the film, such as John Steele (played by the fabulously named Red Buttons!), the Yank paratrooper deafened by the church bells of St. Mere Eglise, or the tubby German - Gert 'Goldfinger' Frobe, as 'Unteroffizier "Kaffeekanne"' - who every morning takes food and drink to his kameraden in their bunkers.

There are too many excellent and memorable moments in this full-fat classic to recount them all. Two of my personal favourites are when F Co. of the 505th U.S. Paras land smack dab in the middle of St. Mere Eglise, and when 'Dutch' Schultz (Breymer), of the 82nd Airborne, hooks up with troops of the 101st Airborne, and they pass within feet a German patrol coming the opposite way, on the other side of a brick wall, only for both patrols to disappear phantom-like into the night.

I'll not be tempted here to go into that rabbit warren of what's historically right or wrong in the movie. Suffice it to say that this is the sort of film that, if seen when young - as I did - can help ignite a passion for military history. And once that bug's got hold, one will be inspired by watching such films to ferret out whatever the truths may be. 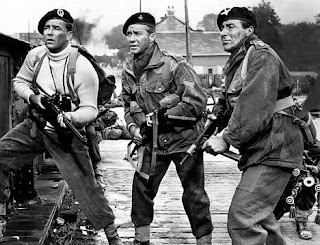 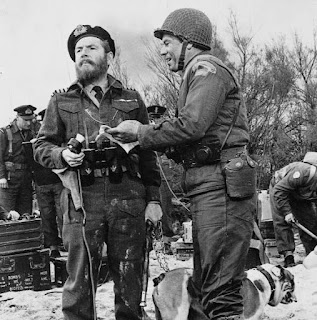 As good as this is, and personally I think it's great, D-Day really does need the HBO style treatment; a full-on multi-episode telling, to further explore the many threads just touched on here. For one thing, this version stops once the Allies are off the beaches [4]. And these days a film could more accurately depict everything from the epic invasion armada, to the German materiel used to defend (panzers etc are most notable in this film - indeed, it's a central theme - by their total absence.

[1] Many post-war WWII movies use too much real stock footage from the war. The Longest Day resorts to this trick just two or three times, thankfully. The trained buffs' eye will of course spot these moments. But at least the makers of this movie showed exemplary restraint. 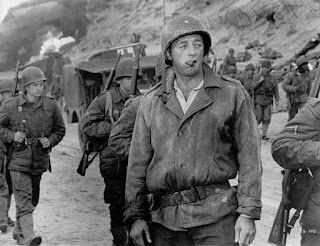 [2] I've tried to refrain from nit-picking over the facts of history. But I feel I ought to mention that although Steele did get caught on the church tower - an accident that probably saved his life - he wasn't actually deafened by the church bells.

[3] Todd was himself present at Pegasus Bridge, during the Overlord operations, as a Captain.

And to round off this post, some images of some of the Germans:

Oberst. Josef Priller (Heinz Reincke) pilots one of two Me 108 'Taifun' used in the film.

... who, in this film at least, is the first German to spot the invasion armada.