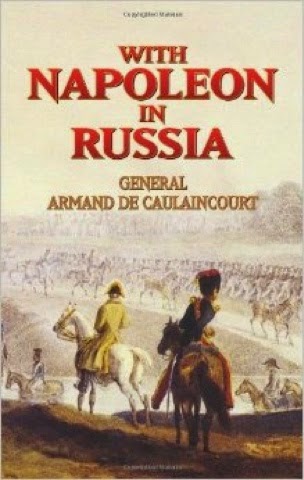 Caulaincourt's remarkable corrective to 'all the fables that have been told, and that will yet be told ...'

Armand Augustin Louis de Caulaincourt (1773-1827) was a very interesting figure in the Napoleonic era, primarily serving France and Napoleon as a diplomat, and occasionally coming very close indeed to Bonaparte, in particular on the journey back to Paris during the retreat out of Russia, in the winter of 1812. His memoirs are interesting both because of this particular episode, with the unusual opportunity that circumstances afforded him, but also because they were not published during the lifetimes of either Caulaincourt or Napoleon, and, of course, numerous other reasons besides these.

The fact of the memoirs posthumous publication - in fact the manuscript, if the intro to this edition is to be believed, was nearly lost with the destruction of the Caulaincourt estate, only finally being published in 1933! - along with the tone of the writing itself, and the way that it dovetails well into many other contemporary accounts, has lead many authorities on the period to feel that it offers an almost unique insight into Napoleon the man (I'll return to this theme a bit later). 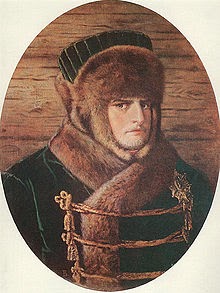 Napoleon in his winter togs, as painted by Russian artist Vasily Vereshchagin.

To my highly sceptical mind it's always debatable how far documents such as this, even those not meant for immediate publication, can be trusted, especially where the author make claims, as Caulaincourt repeatedly does, of speaking truth to power. Well, whatever the ultimate reality of that issue is, or was, one thing is certain, his memoirs - or at least this portion of them (this Dover edition only concerns itself with the 1812 related part; there's also material on the following period*) - are an excellent read! 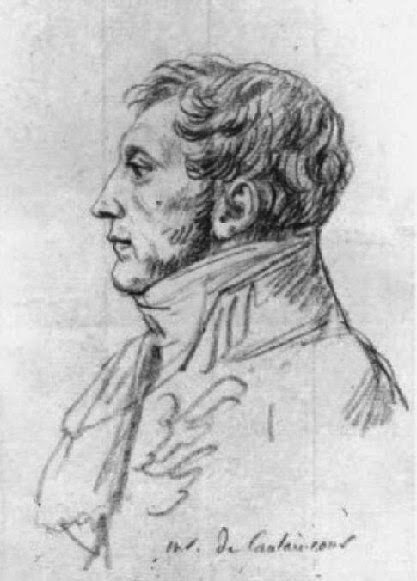 When I read on p. 27 that 'like all curt and obstinate people, I remained on my own ground, maintaining only my own ideas', I immediately knew I really liked Caulaincourt! I loved his whole approach: his writing, like his mind, seems to have been lean and well-balanced, frank and open, and always interesting. Many writers of this era (at least as they've come down to us) wrote in very stodgily verbose styles, something that can be said of all kinds of people, from Siborne to Clausewitz, even Napoleon himself on occasion.

The balance Caulaincourt strikes between criticism and admiration seems pitch-perfect: at points he is mesmerised by Napoleon's famed charisma - 'he seemed to me sublime'; whilst at others he isn't -  'the Emperor was carried away by his own illusion.' But he is always balanced and fair and, in the end, humble enough to conclude:  'Who could then foresee what has since happened?' 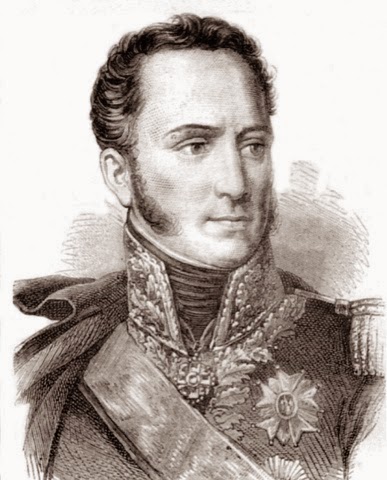 Caulaincourt also strikes a very successful balance between the big picture and the small details, such that we get character analysis of his boss, fabulous vignettes from the ever-fascinating story of the campaign itself ('for a few napoleons [I was able to buy], portraits of the entire Imperial family of Russia which the troops were using as screens in their bivouacs.'), through to many insights into Napoleon's thinking (extending in scope way beyond the 1812 campaign itself), noted down in far from ideal conditions whilst on a unique adventure in the company of one of recent history's true Titans.

In a recent debate for 'intelligence squared', chaired by by Jeremy Paxman, and featuring authors Andrew Roberts and Adam Zamoyski, the last named of these debaters cited Caulaincourt on at least one occasion, possibly more. Zamoyski, who has himself written one of the best short accounts of the 1812 campaign, was using Caulaincourt as ammunition for his anti-Napoleonic position. But, as I was reading these memoirs at the time, it struck me very forcibly that Roberts could equally well have quoted things from them to support his pro-Napoleon argument! I think this fact alone conveys quite well how candid and broad Caulaincourt's treatment of his subject is. 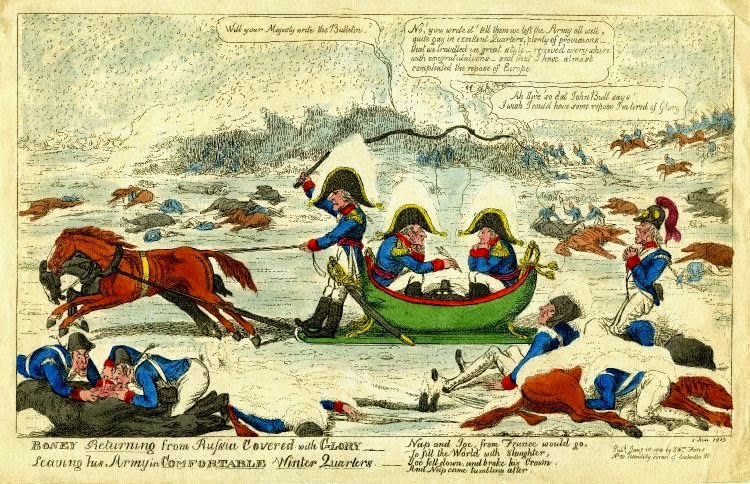 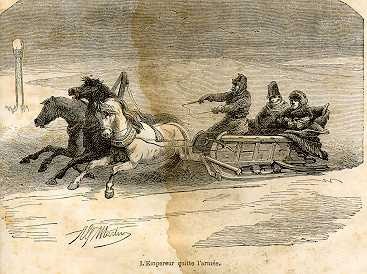 A more sobre rendition of the same episode. 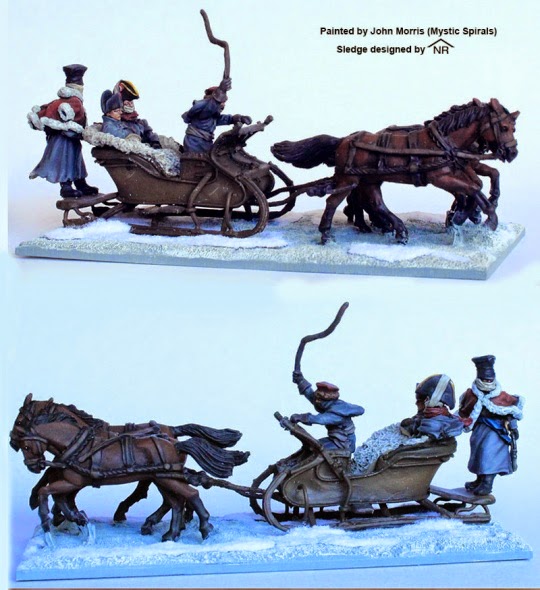 The same tableaux masterfully rendered in 28mm by Perry Miniatures.

The ultimate testimony is that Caulaincourt remained very loyal to Napoleon, and on balance one feels that he was, if you like, under the Great Man's spell. But this in itself is a very illuminating fact, because what it shows is that a man of great intelligence and independence of mind chose - as so many did - to follow Napoleon. In the end, therefore, I think Caulaincourt's memoirs serve better the argument for rather than against the idea that Napoleon was a Great Man.

Returning momentarily to the unusual insights this book gives into Napoleon the man (never mind the Great Man), I recall vividly a passage in which Napoleon and Caulaincourt discuss what might happen if they are intercepted en-route: after Napoleon checks that Caulaincourt has the pistols, and that they're loaded, they discuss the numerous grisly ends they might come to, all of which culminates in a near hysterical giggling fit.

Caulaincourt says of this episode: 'I never saw the Emperor in such good spirits, so human, so funny. His gaiety was so infectious that it was some time before we could speak a word without finding some fresh source of amusement ... I can't tell you what joy it gave me to see the great man laughing at this moment of supreme danger and nearly unbearable cold.' 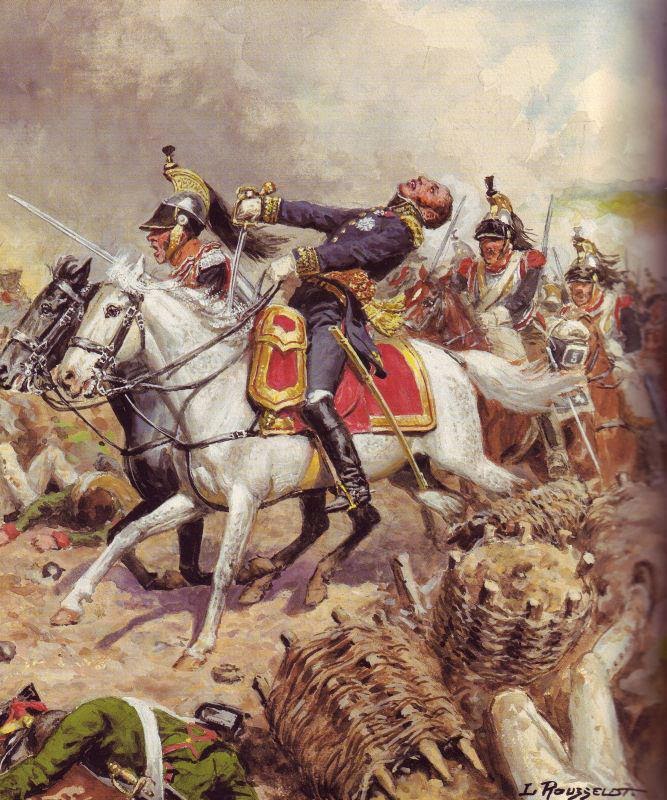 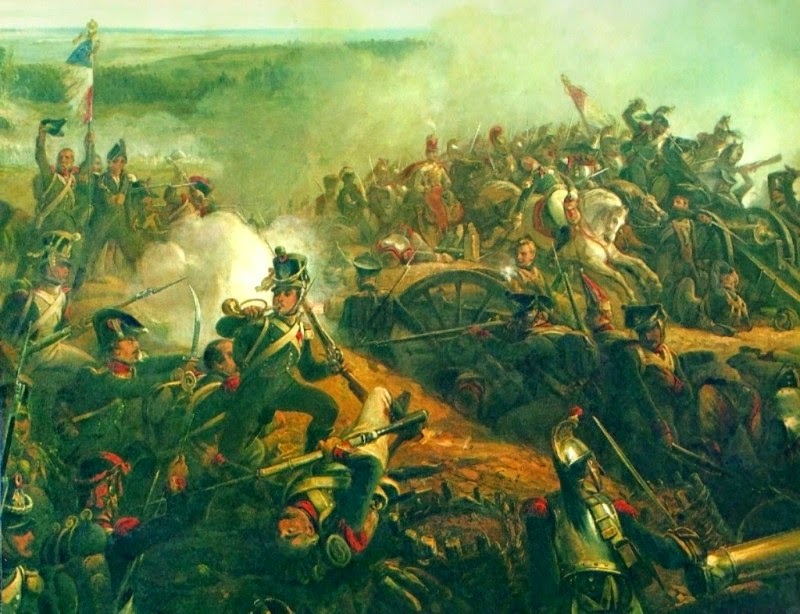 Another view of the same moment. This time the younger
Caulaincourt's death is in the background.

The life Caulaincourt and Napoleon lead was a very arduous one indeed - up all hours, always active, often in the saddle, sometimes even bivouacking, like the troops, en plein air, and frequently exposed to the very real dangers of battle - and this is something that these memoirs make abundantly clear. Indeed, Caulaincourt lost his younger brother (see above pics) at the Battle of Borodino, a passage in his memoirs that is treated with a very manly modesty and understatement, which only makes it the more powerfully moving.

This kind of Stoicism in the face of death and personal suffering is really quite incredible, and perhaps something that's hard for pampered civilians like myself to understand. Another interesting link here, is that whilst both Napoleon and Caulaincourt lost many dear to them in battle, they were both finally laid low by stomach cancer, Napoleon at the age of 51, and Caulaincourt at the age of 53. 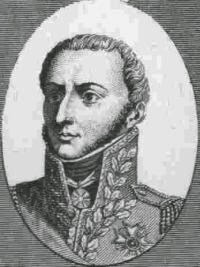 Another portrait of Caulaincourt.

This Dover edition isn't the best served of books on 1812 in terms of maps or illustration, but then it is cheap, and these things can be found elsewhere. Unfortunately no credit is given to whoever did the translation, which is a pity, as it's excellently done. One very handy little feature that it does have, however, is a small biographical section in which many of the various Napoleonic Marshals, Dukes and suchlike are listed, along with brief potted histories.

As any Napoleonic buff knows, this is an era blessed by a super-abundance of literature. For my money, Caulaincourt's memoirs rank with the very best in that extensive genre.

* Which, if it's as interesting and engaging as this, I'd love to read some day. 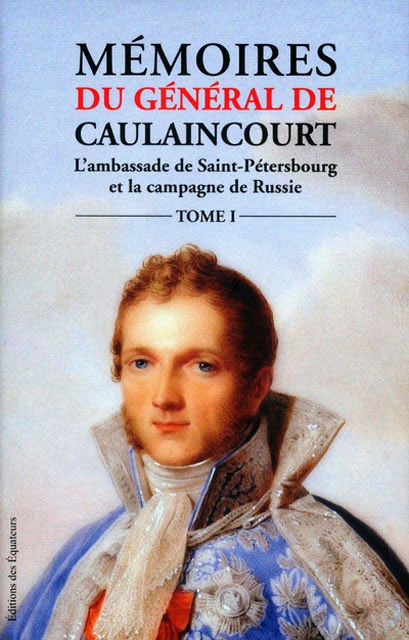 Yet another rendering of Caulaincourt's likeness,
from a French edition of his memoirs.