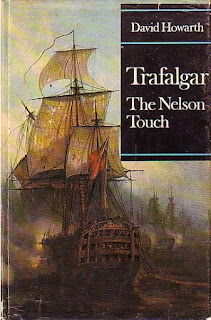 Wow, what a story!

The age of sail - when sail was the main or only method of traversing the high seas - grows ever more romantic as it recedes further into history. David Howarth, whose superb Waterloo, A Near Run Thing, is the kind of book to inspire a lifelong passion for Napoleonic history, proves just as adept at bringing the naval war of this now distant epoch to vivid and colourful life, in this excellent slim but compelling volume on Nelson's memorable victory at Trafalgar. This is perhaps not entirely surprisingly, as Howarth was himself a naval officer, helping run the famous 'Shetland Bus' during WWII.

The sad fates of the two opposing commanders, Britain's heroic and much admired Nelson, and France's tragic and much maligned Villeneuve, illustrate very well how real history sometimes combines both mythic grandeur and epic tragedy. Nelson is, perhaps, as close as we can come in Britain to having a man as charismatic and effective in leadership as Napoleon. Wellington was of course effective and popular, but he didn't have the same public charisma as either Napoleon or Nelson. But where Nelson excelled in this watery world, Napoleon, usually so prodigiously capable, appears at his least able when it comes to maritime matters. 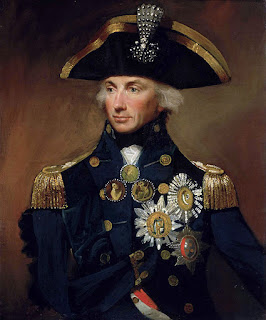 Of course, Nelson's part in this story is exciting and compelling in itself, and has often been treated in various media. But Howarth skilfully weaves this most famous strand of this famous and many threaded story together with numerous others, including Villeneuve's, and those of many other senior figures of all three nations, British French and Spanish. He also describes the navies themselves, and the contexts they fought in, even imparting sketchy views of the lower ranks (about whom, at the time Howarth was writing - and perhaps still? - very little was known).

The whole is superbly put together, flowing very smoothly, moving the happy reader along much like a favourable wind in one's sails! Howarth skilfully builds his narrative, with the gentle yet unstoppable inevitability of an ocean swell, towards the longest chapter, The Battle, which describes a messy and confusing naval action with impressive simplicity and clarity. This is so well done that once I reached this section I found it extremely hard to put the book down. Indeed, as near as was possible, I read straight through to the end. It was a moving and exhilarating read.

For victors and vanquished alike, far from a quick and peaceful cessation of travails, after the confusion and intensity of this most famous of naval battles - the metaphorical storm, if you like - came the literal storm. This week-long maritime hurricane was, according to those that survived it, even more challenging than the battle itself. Howarth describes this superbly too, ultimately following the story beyond this to the funeral of Nelson and the rather shady and politically convenient demise of Villeneuve, during his return from British captivity. 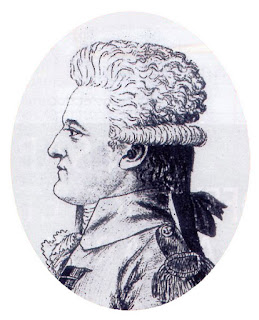 The latter left no issue to suffer any subsequent ignominy. Nelson, although married, is famed for his relationship with his beloved mistress, Emma Hamilton, by whom he had a daughter named Horatia. Their fate - only very vaguely alluded to in this brief narrative - balances the scales of tragedy somewhat, across the channel.

The sacrifices of this savage naval battle are thrown into yet starker relief due to the fact that even before Nelson (and so many other mariners of numerous nationalities) made the ultimate sacrifice, Napoleon had turned away from the cross-channel invasion project based at Boulogne, learning of the naval disaster as he trounced his foes on the road that lead to Austerlitz.

Like Howarth's book on Waterloo this is a fabulous read, and one that could easily seed a lifelong passion for warfare in the age of sail. It's great that HMS Victory has been preserved. Having read this I must go and see her for myself! As a result of reading this wonderful book I also want to read further in this area: I have several appropriate titles lined up. Just got to find the time to read 'em! 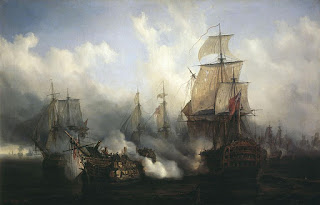 Above, the complete painting, by Auguste Mayer, a portion of which appears on the books dust-jacket. [1]

The old World Books edition that I bought, a 1970 reprint of the 1969 Collins 1st edition, is richly illustrated, with plenty of images - including portraits of most of the senior commanders, various naval scenes, some of the battle, some more general (mostly in black and white, with a few double page spreads in full colour) - and even some simple but helpful maps of the unfolding action.

The one glaring omission is a glossary of nautical/naval terminology. For us landlubbers who don't know our port from our starboard, this would've been a most useful and obvious thing to include. Despite this I'm giving this five Boney's Bicornes: there will doubtless be more thorough and detailed books on this subject. But I doubt there will be many that are more readable or exciting.
---------- 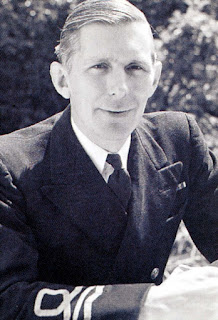 Author David Howarth was an interesting man. With a naval background - during WWII one of his areas of service was as assistant to the British officer organising the famous 'Shetland Bus', whereby Britain helped keep the Norwegian resistance movement supplied and trained, etc. - he was not only an author on nautical subjects, but also a boat-builder, and his writings would extend to areas of land warfare, including his book on Waterloo, which I've also reviewed on this blog. Howarth's final book, written in collaboration with his son, was a biography of 'Britain's most famous Admiral', Nelson, entitled Nelson: The Immortal Memory, published in 1988. On the strength of the two Howarth books I've read so far, I'm very much inclined to track that down and read that as well.

[1] The beautiful painting is flawed: it shows the French Bucentaure, which was indeed at Trafalgar, engaged by the British ship Sandwich, which wasn't! Nonetheless, it captures the visual drama of warfare at sea in the age o' sail admirally, so to speak.
Posted by Seb Palmer at 09:26 2 comments:

Playwright turned author and amateur historian R. F. Delderfield was very clearly something of a latter-day Bonapartist. So far I've read three of his non-fiction books [1] on the Napoleonic era: this one, Napoleon in Love (subject = obvious!), and The March of the Twenty Six (subject = the Napoleonic Marshalate). They are all very, very good indeed. What is best about them, undoubtedly, is how readable and exciting they are.

Delderfield's skills as a writer of fiction and drama are very evident throughout. His skills and credentials as a historian might perhaps be open to debate, and I have seen reviews criticising his favouring of excitement and atmosphere over scholarly exactitude. I must say, this doesn't bother me too much. There's plenty of other literature out there on Napoleonic subjects; one can do as Delderfield did, and read as much of it as possible and then make one's own mind up as to the 'facts'.

Looking suitably serious, this shot is used (facing left) on the rear of the dust jacket of my edition. [2]

Of the three Delderfield Napoleonic history books that I have read so far, this is probably the best. The story starts with the aftermath of the retreat from Russia in 1812. Delderfield's skills as a novelist enable him to set up a series of very vivid opening tableux, of Cossacks on the Elbe, in 1813, and garrison towns throughout the empire with wavering and divided loyalties. He skilfully describes the Coalition powers moving westwards as the French retreat, their crumbling alliances and stranded fortress outposts draining Napoleon's resources, such that though he fights with great skill and verve, there's a kind of inevitability to his gradual downfall.

Delderfield draws on many contemporary accounts, making particular use of those by Marbot and Barrès. And he clearly admires Eugene, MacDonald and Caulaincourt, for their honesty and loyalty at a time when many, including such stalwarts as Ney and Murat were to eventually abandon the man who had helped raise them and so many others like them so high. The central story retains a resolutely central and western European theme, although Delderfield does continually refer to important developments in other theatres, such as Italy and Spain.

One of the reasons I like this more than the other two Delderfield Napoleonic books I've thus far read - and I love them all - is that both of the other two above-mentioned works are kinds of 'group portraits', describing numerous individuals and their relations with Napoleon in his varied conquests. This one has a more satisfyingly focussed central narrative thread, telling as it does a very interesting and exciting story.

It's intriguing that Delderfield, clearly a fan of Napoleon (but not an uncritical one), in covering the campaigns of this 'Great Captain' chose to write - at least in terms of his published historical works (and this observation is somewhat mitigated by the more extended coverage of his group portrait works) - only about the Russian campaign and its aftermath (he has a book about the the Russian campaign which I intrnd to read), rather than the glory days of his first 15 or so triumphant years.

Consequently, and given his obviously pro-Napoleonic stance, there's something elegiac in the tone of this work, a mood he brilliantly captures in much of his Napoleonic writing, but especially poignantly at the close of this particular book, when he describes the ageing veterans of the Grande Armée growing old under other more peaceful but less 'glorious' French regimes.

Pictured above: Napoleon looking suitably glum, as he contemplates the sun setting on his 'glory'. This classic image of Napoleon was painted by Paul Delaroche, and depicts Napoleon at Fontainebleu, in 1814, capturing the both the period and the mood, as well as the siutter admirably.

Thomas Hardy was another writer of fiction obsessed with Napoleonic history, and this book exemplifies what he was getting at when he said 'My argument is that War makes rattling good history; but Peace is poor reading. So I back Bonaparte for the reason that he will give pleasure to posterity.' This book was difficult to put down, and was certainly a great pleasure to read.

[1] He also wrote some Napoleonic fiction. I read Seven Men of Gascony in my mid-teens, and, whilst it is admittedly not 'Great Literature', like say for example Tolstoy's War And Peace, it certainly helped cement my love for the era. And it certainly qualifies under Hardy's definition, as a 'rattling good' read, and part of Napoleon's legacy of 'pleasure to posterity'.

[2] My copy was brought at a wargames from show, from (I think?) Paul Meekins, and is a Chilton Press 1968 1st edition. Vintage booksniffers... this was a good year: what a bouquet this old tome has!
Posted by Seb Palmer at 10:56 4 comments: