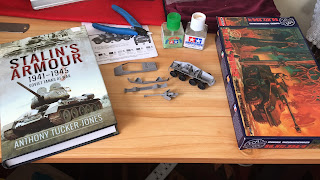 Despite the Coronavirus lockdown, I’ve hardly done any mini-military stuff for ages.

I thought being forced to stay home would mean a massive bonanza of model making and figure painting. But no, instead I’ve been either resting, reading, working (from home) or doing household stuff, from the quotidian chores, to building a shed and a greenhouse.

And as a result, I’ve not had the time or energy to model or paint. I even had a bit of a break from the reading. But now I’m making a conscious effort to get back in the saddle. And in that vein, here’s my first 1/72 kit build and review since, well... poss before Xmas!?

The latest kit to go on the production line is this lovely Roden 1/72 SdKfz 234/4. I do love Roden’s box art! Very colourful and evocative. David Willey of Tank Museum curatorial fame does a great Tank Chat on the German 8-rad’ line of AFVs. I include a link to it here, for reference/interest.

I started the build out of sequence, with the Pak-40 type gun. It’s a very detailed little sub-construction. Very fiddly and intricate, but great. Unfortunately I didn't photograph the building of the gun. So construction pics start with the running-gear. 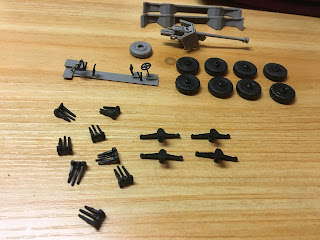 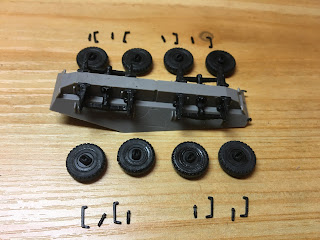 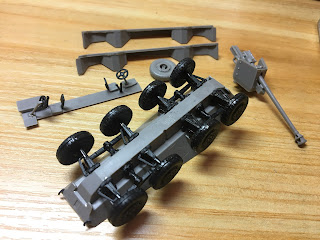 The somewhat open cab design of this vehicle also required that I paint the interior. Willey notes in his chat how the Bovington example is painted incorrectly, the vehicle itself only came into series production in the later part of the war, the dunkelgelb as opposed to dunkelgrau era! The interior is also similarly incorrect. I decided to give mine an elfenbein interior, such as was sported by German tanks.

After I’d built the gun, I went back to the ‘proper order of things’, which meant running-gear. And boy is the Roden’s 234 style eight-wheeler assembly complex and fiddly! I think it’s designed such that, in theory, the wheels can be aligned at differing angles, and even, possibly, rotate! But in reality this doesn’t work. Or at least it didn’t for me. This is my second Roden 234. My first was a Puma variant (see the build of that here). And it was the same story, re the wheels. 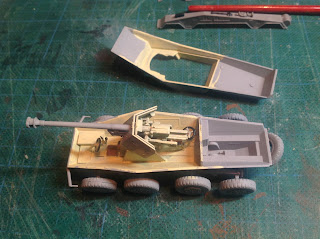 My version of an elfenbein interior, blocked in. 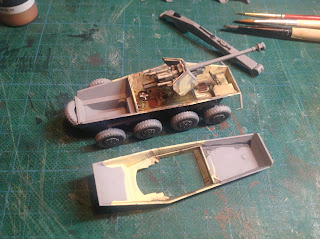 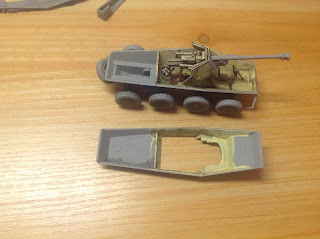 Washes and weathering, pretty much done.
Painting and weathering the interior, and the gun, which I decided to attach (another out of sequence improvisation of my own choosing) was kind of fun, and yet also kind of frustrating. I’ve learned that I’m really bad at the ‘pin-wash’/panel line type stuff.

Anyway, I did the best I could, and after a while, I achieved a result I decided was good enough. I was thinking of putting driver figures into the fore and aft driving seats. But I haven’t. I definitely will on the next 234 with a similarly open fighting compartment. 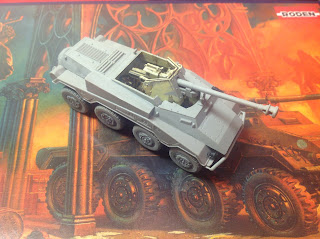 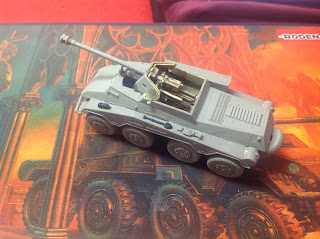 I'll prob' add a few bits of extra stowage. But not much.

At the time of posting, this 234/4 variant is now basically built. But before I paint the exterior, some gaps need filling. And I’ll probably add a little detailing, such as stowage.

I noticed in many wartime images online that there appear to be rods - barrel-cleaning stuff, perhaps? - on the left side of the vehicle, that are not a feature included in this kit. They should be a fun and easy scratch-build addition!

Part two will be painting and decals. To follow soon, I hope!