Having moved to a new home, all my free time has been consumed by home-improvement type activity. I was hoping that during this half-term (I'm a teacher!) I'd get the chance to do some model-making or figure painting. But, alas, that's not transpired.

Instead, today I decided that I'd build some small display shelves for my growing collection of (mostly) WWII armour, etc. This will be my second DIY shelving project, the previous one being bookshelves along one entire wall at our previous home. This time, however, I wanted to use a router my dad gave me a while back. 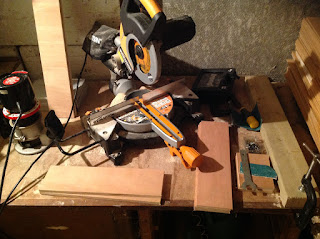 My workspace, and the plywood, prior to starting.

The shelves are made from plywood in 6.5 and 12 mm thicknesses. My router is an old American one, with shank and bits in imperial sizes. So I've been working to roughly 1/4 and 1/2 inch sizes. I decided I'd kind of busk this; the previous bookcase project was laboriously planned, with diagrams, etc. This time I just got my local DIY store to cut the wood to exact widths but only approximate lengths, to be decided/finished on the fly at home.

I had to spend a while clearing up a workspace in the shed (itself in need of renovation!), but that's no bad thing; now I have a creditable working area, and a few tools in situ, ready to go. This was my first project using a router. Something I've been looking forward to for ages. And, just as I'd hoped it would be, it was great fun!

This was one of the best of the YouTube router tutorials.

YouTube is fab: I watched several tutorials on using a router, and although most of the routers (well, all of 'em actually) in the videos were more modern, and had numerous features my olde beast lacks, they taught me what I needed to know. I ended up having to build a 'jig', to help guide the cuts I'd be making for the shelves. That in itself was fun. And I can use it for other future projects. 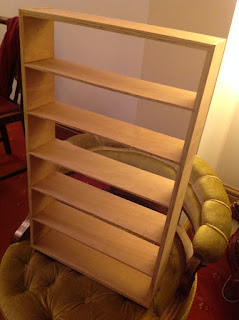 I bought sufficient plywood to build two sets of shelves, each pretty small - they'll be displaying 1/72 vehicles and figures - and built one set in about an hour. I need to work out a better way of assembling and gluing them. And I'll probably be adding backboards, and painting them, before I decide how to mount them.

The whole project is as much about protecting my models in the short/medium term, as it is about displaying them. A number have suffered damage during our move, as they're simply bubble-wrapped and stored in plastic tubs at present (several layers deep!). I'm also hoping that having them on display will encourage me to start finishing them properly. Mostly it's just an issue of getting the durn things painted. 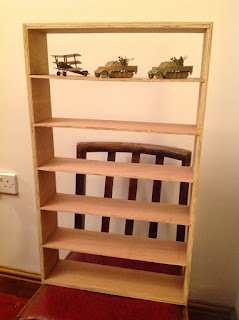 Anyhoo, even if it's not actual model-making or figure work, it's good to have finally done something related to my mini-military-models passion! If anyone reading this has done anything similar, let me know/see. After making a second one of these my own future projects in this line will, I hope, be more de-luxe versions - glass fronted, possibly with built-in LED lighting, and perhaps even  decorated with some ogee style ornamentation? (an excuse for more router fun!) - and some kind of drawer-storage for my mini armies. 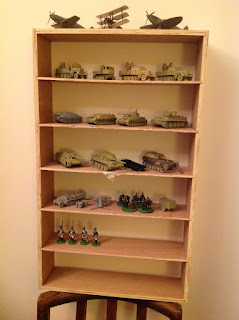 I liberated a bunch of stuff from bubble-wrap, just to see how things might look. 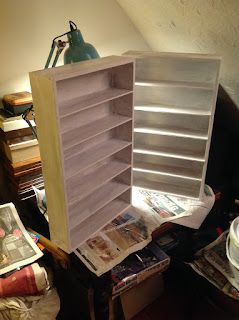 The pair get a 1st coat of paint; undercoat white.

Since first posting I've built the second set, added backboards to both, and started painting them. After two coats of white, as a base, I did the inner areas in green, and the outer areas in a pale beige. The green needs a second coat, to neaten it up. And then I'll seal it all off with some kind of vanish. Still not quite finished. But I'm pleased with how they're shaping up. 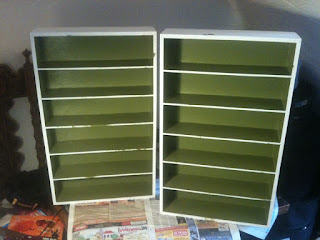 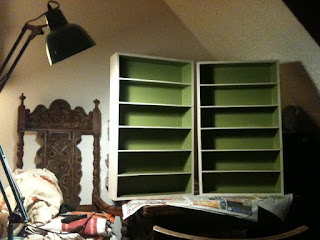 Beige, or 'Roman Stone', on the outer surfaces. 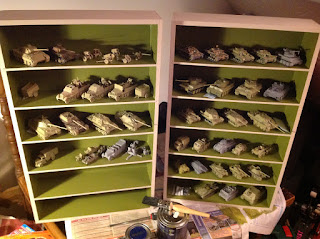 Unpacked more models, to test drive the shelves, so to speak.