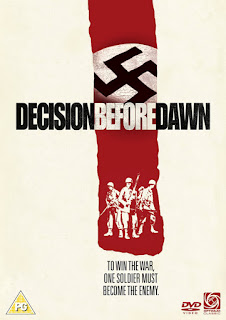 Crikey, it's been ages since I last posted!

I recently acquired a stash of new war films, mostly WWII (but a few from other eras), including such well known blockbusters as Saving Private Ryan, and the Clint Eastwood Pacific theatre companion pieces Flags Of Our Fathers and Letters From Iwo Jima. But as well as these better known movies, I also got a a few less well known ones, including A Time To Love & A Time To Die, and the one under review in this post, Decision Before Dawn.

In my humble opinion, this is a really good film, made even better by the fact it was filmed amidst the postwar ruins of a vanquished Germany. Purportedly based on real events, Oskar Werner steals the show as 'Happy', a decent German soldier (actually a medic, attached to an anti-aircraft unit), who, having been captured by US troops - where he acquires his nickname - decides to work towards hastening the German defeat by acting as a double-agent. 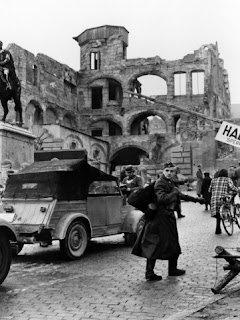 Germany in ruins. 'Happy' runs the gauntlet of a military checkpoint.

In many ways this is more thriller than gung-ho all-action war film. And for me the setting makes it enough of a war film to keep this war-movie buff very happy.

Sure, this film isn't perfect - the American perspective (and it's an American film) on the narrative thread concerning the theme of 'traitors' feels somewhat chest-thumping and leaden, and the romantic interlude with Hildegard Knef (that's her in the German poster below) feels contrived - but by and large it's very successful.

The central themes of divided loyalties, suspicion vs. mistrust, bravery vs. treachery, pragmatism vs. idealism, and so on, particularly in the context of the crumbling Reich, and largely from a German perspective, make this a fascinating and quite unusual film. 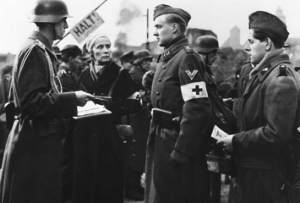 More stress for 'Happy' at yet another checkpoint.

It's nicely shot in starkly evocative black and white, and some of the settings are absolutely incredible. Most of the actors and the characters they portray are pretty convincing (we get a glimpse of the young Klaus Kinski in one scene), even if some err towards the hammy here and there.

Oskar Werner's character is great, as is the less idealistic 'Tiger', played by Hans Christian Blech. Both of the American leads, Richard Baseheart and Gary Merrill, are strong charismatic actors, although their roles are somewhat less interesting than those of the more 'conflicted' German protagonists. 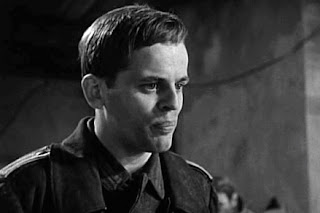 A young Klaus Kinski has a very minor (and uncredited) cameo.

The poignant drama inherent in a world of collapsing belief in eventual victory, alongside the endemic paranoia of a totalitarian militaristic state, even flows over into the fates of some of the more minor parts, such as Happy's wounded comrade, with whom he's originally captured, and the young boy who plays an ardent member of the Hitler Youth, who's both a dedicated juvenile Nazi, and also a relative of 'Tiger', as the Germans struggle with their place in the side that is both morally compromised and losing. 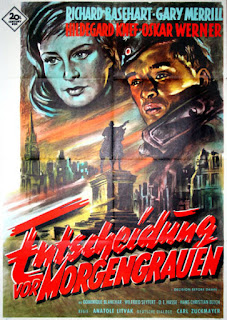 The German poster for the movie.

As the pic. of 'Happy' at the checkpoint at the top of this post shows, uniforms, locations and vehicles are largely authentic. Sadly for equipment buffs - show me a wargamer who isn't one! - the tanks used in the film are American, but most of the other materiel is genuine German stuff, which is nice and unusual in a film of this vintage.

I'm deliberately steering clear of a plot synopsis, as that might spoil the fun of seeing the movie. Suffice it to say that this is a thrilling, moving, well directed, well acted film, depicting a highly interesting scenario, set amidst the actual ruins of the debacle of the closing stages of WWII itself. Much lauded at the time, although it's less well remembered now it's certainly worth seeing.
Posted by Seb Palmer at 09:32 No comments: