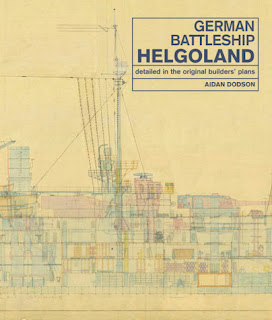 From my initial reading of some of the dustjacket blurb I gather that the subtitle, Detailed In The Original Builder's Plans, denotes this as being part of a series from Seaforth, Pen & Sword's naval imprint, drawing upon original plans from the collection of the National Maritime Museum.


I'm fascinated by war at sea. But I'm very virginal, when it comes to nautical affairs, so I'm not the most expert of judges on this topic. What I can see immediately, is that in respect of the images reproduced here, this is a five-star affair: chock-full of comprehensive and beautiful draughtsman's drawings of the Helgoland.

Construction of the Helgoland was completed and she entered service in 1909. She served throughout WWI, taking part in the famous battle of Jutland. After Germany's defeat England took custody of her, eventually selling her to be scrapped, in 1924. What a sad fate for such a monstrous beauty, and  what a waste of so much engineering work. But that's what happens to old ships, especially during/after wars. 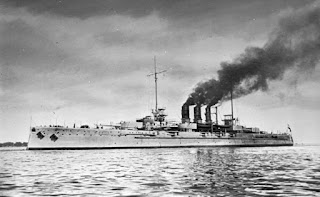 I have to confess that the degree of detail provided here, which to me seems quite staggering, is a bit beyond what I require. Consequently I abandoned the complete reading of the text I initially embarked upon, about halfway through, with my head spinning, and instead skimmed through the remainder.

The largest of the reproductions is this four page spread profile.

What I spent more time on were the astonishingly detailed diagrams. Two of the pages fold out, giving two three-page spreads bookending one four-page spread. One could easily spend hours upon hours examining them. The many images run the entire gamut, detailing just about everything, and include plan, profile and sectional views. The combination of aesthetic  pleasure and awe at the engineering (not to mention admin, etc.) that I derive from studying these surprises me. What prodigious feats of construction/destruction we, the human animal, are capable of!

Whilst I'm morally confused about my fascination with war machines and war in general, I know that I'm totally blown away (wah-waah!) by the 'pure' engineering/tech aspects. Guns are great examples of this. Tanks are even better. But battleships? They have to be the ultimate, surely? Or maybe that'd be aircraft carriers... hmmm!? 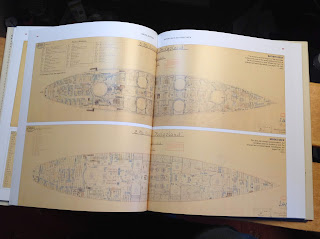 There are detailed plan views of every deck, and way more besides.

Books like this often presume a certain degree of knowledge on the part of the reader. This one certainly does. Nevertheless, I feel such specialist publications really ought to include glossaries and the like, regardless. It'd be a great help to those readers of such works who, like me, might not yet know their binnacles from their bilge pumps.

However, that one gripe aside, the print quality and the number and detail of the schematic draughts used here are all very high. This level of detail is not, perhaps, for the mildly interested (or fainthearted). But I would imagine that for the nautical buff - and given how much a landlubber like me has enjoyed this - will love this. 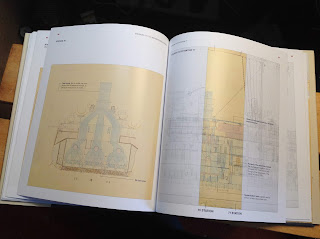 26 spreads give 52 images detailing new station by station, from stem to stern.

Reading/perusing this has me determined to turn my hand to some form of naval modelling at some point soon. My only nautical kits are a 1/300 Dutch gunboat by Rod Langton, a U-Boat and the Bismarck (I forget yet make and scale if the latter; and poss you could also include my Arado AR-196 and Catalina flying boat models?), all currently in the attic I think. Anyway, back to the book: I'm no expert in this area, but I'd say this is an excellent book.

* As well as the lack of a glossary, there are no archival photos of Helgoland, which is a pity. Pictures of her under construction and in action would have made a terrific addition.
Posted by Seb Palmer at 12:16