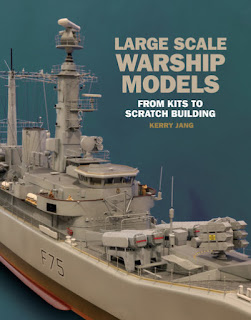 Canadian modelmaker Kerry Jang has given us a very inspiring resource in this book. He starts off by telling us how he first came to build a big model boat, after an 'apprenticeship' making smaller more conventional kits. He then goes on to discuss how various skills acquired in these earlier periods can be harnessed to making more ambitious models.

In chapters entitled What's Out There and Tools Of The Trade he expands upon what products one might buy to get your project started, and what gear you need to undertake the work. The vast bulk of the book however, about 75% of it I reckon, is given over to step by step expositions of the building process, from the hull on upwards, including fitting radio-control electronics, up through the decking, to superstructure, and finally rigging, painting and finishing, etc. All of this is heavily illustrated with examples of his own works in progress.

Personally I'm yet to embark on even the first stage of my nautical modelling adventures - the only model I've built so far (since an awful scratch-built balsa wood man o'war in my childhood!*) is an unfinished 1/300 Rod Langton Dutch Gunboat of the Napoleonic era - with a small U-Boat and an even smaller scale model of Bismarck waiting to be built.

And even if/when I do build any larger boats - something I'd definitely like to do - I think they'll probably be Napoleonic or WWII, whereas Jang's boats, as featured in this book, are (I think?) mostly more from the modern era. But despite this, the book is a great resource, full of inspiration and information, some very specific to the subject, and some - for example the stuff on making your own moulds and casting your own bits and bobs in resin - more suited to general use.

The book ends with a gallery showcasing four of Jang's extremely impressive large ship models. Beautifully illustrated, in crisp high-res full colour, this book is a feast for the eyes, supported by lots of useful info, including stuff about sourcing both reference and modelling materials and products. All in all? Very good.

* Inspired by The Unicorn in the Tintin books, and destroyed by 'Hurricane Hannah', aka my sister!
Posted by Seb Palmer at 23:46