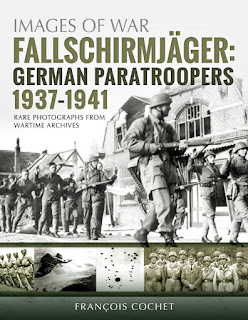 As if to illustrate a point I alluded to in a previous post on the M7 Priest title, regarding variable editorial quality (both are from the same Images of War series), this book on the earlier history of Germany's Fallschirmjäger is very different in feel and quality. Where the Doyle title came over very professionally, this reads like the work of an amateur/enthusiast. That in itself isn't necessarily an issue. But it becomes one when the writing is also plagued by other problems.


I'm a big 'fan', you might say, of the German military in WWII, but not - given the toxic political context of Hitler's Germany, in which it was rooted - an uncritical one. It seems to me that Cochet has been seduced by the German perspective to such an extent that his writing all too frequently reads as it's been lifted directly from the wartime commentary and picture captioning you encounter in such German propaganda publications as Signal or Der Adler. 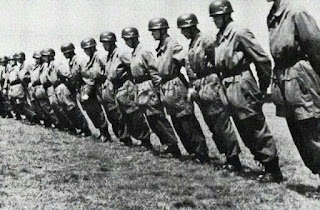 
Plus points in the books favour are things such as the written and visual history of the beginnings of the German airborne infantry arm, the training the troops went through, and the fairly full coverage of the operations they took part in during the period covered herein. The bulk of the text, however, and even a good number of the images are not of the highest quality. But they are of course very useful if you have a particular interest in the subject.

By way of an example of the poorer quality occasionally evident, there's a fairly comical instance where a picture describes the 'recovery of a container filled with heavy weapons'. Even a cursory glance at the image - which, alas, I can't find online (giving more than usual credence to the tag line 'rare photographs from wartime archives') - reveals that the contents of the container are very obviously food: one fallschirmjäger is even handing another a sausage! Heavy weapons indeed!! 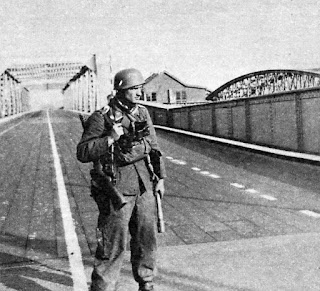 A fallschirmjäger stands sentry on the Dordrecht bridge, Holland, 1940.

Despite my penchant for all things German in WWII, and their often very funky gear, I'm not massively drawn to the Fallschirmjäger branch of service. I don't quite understand why that is. But this book hasn't had the same effect on me as Doyle's Priest book did, which excited an interest in something I hadn't given much thought to before.

Having said all this, and despite being quite critical of the book, I would nevertheless like to see the second instalment, covering '42-'45. After the very costly deployment of airborne forces on Crete, which is covered here, Germany never repeated such operations on the large scale (the loss of aircraft alone in the Cretan operation having serious knock-on effects on German air strength, and directly affecting Barbarossa), the Fallschirmjäger effectively becoming, for the most part, a quasi-elite part of ordinary ground forces, save for the occasional special op, such as Skorzeny's famous rescue of Mussolini. 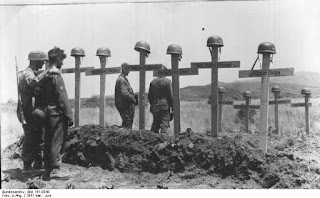 Casualties of the invasion of Crete.

In conclusion, not the best title in this series, but useful for those with a special interest in the subject.

Whilst researching photos etc for this post, I found this page, here you can peruse the whole of an issue of Der Adler (August, 1940), from which I reproduce the following: 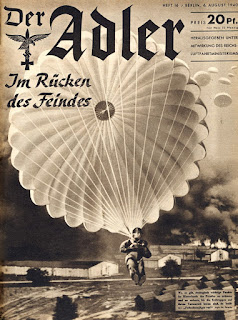 The airborne attack on Holland is front page news. 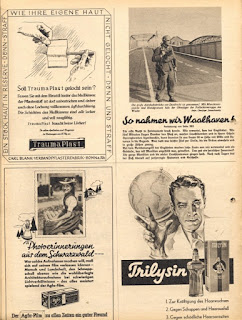 And in amongst the adverts, a possible source for the sentry image?