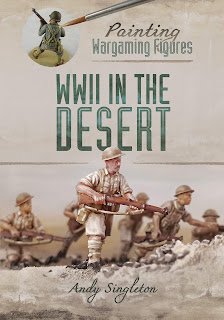 The way the title of this book is presented - Painting Wargame Figures, WWII In The Desert - is suggestive of a series. But I found no mention of this being the case. So I'm not sure if this is part of a series that will cover more of WWII, or is simply a stand-alone title.

The Desert War in North Africa isn't a part of WWII that I'm attracted to. But nevertheless, when offered the chance to review this, I jumped at it. And within a few paragraphs author Andy Singleton was already addressing issues that I was pleased to see mentioned, as they affect me very heavily, such as motivation when painting large quantities of figures.

In his introduction, and then in Part One: Basics, which comprises chapters called Tools of the Trade and Boot Camp, Singleton tackles getting set up and started, and also makes it clear that he's addressing his book, in the main, to entry-level folk. But of course he hopes us more grizzled types might also benefit. 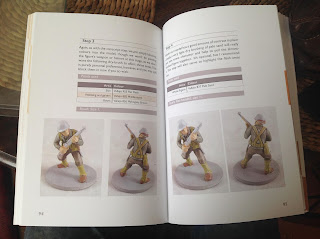 A spread showing an American figure being painted.

Part Two: Painting Guides comprises six chapters, four on the various national forces (British & Commonwealth, Italian, US and German), one on camouflage (specifically the splinter camo' of the German fallschirmjäger), and one on basing. Each of the four national painting guides is further split into three levels: Conscript, Regular and Elite, which as you'd imagine moves from basic to advanced in aptly named stages.

Even though he's covering a theatre I'm less keen on, it's interesting to see how someone who works as a professional figure painter does things. I already use some of the techniques he uses, from priming figures with car spray paint to blocking in base coats, dry-brushing, washes, and so on. So for me there wasn't really anything significantly new here.

That said, whilst many of his colour choices - and like the author I use Vallejo acrylics as my mainstay - are similar to or even the same as my own (inasmuch as the they overlap with my preferred European areas of interest in WWII) there were some that were of interest to me, such as the use of Vallejo 803 Brown Rose as a base colour for flesh. 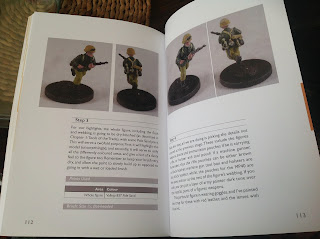 A German figure, over black primer (no!).

The figures Andy paints in the book are all 28mm, with a lone 20mm exception. And in his list of manufacturers at the back of the book he only deals with 28mm, 20mm and 15mm scales. My own WWII forces are almost entirely 1/72, or 20mm, with a small smattering of 1/76. But years ago I had a German army of sorts in 1/300, a scale not mentioned at all in this book. And of course these days there's also 10mm, or larger scales like 40mm and 54mm, etc.

But, as Singleton says, the tools, methods and techniques used here could be applied to most if not all other scales, albeit in potentially differing degrees. A5 in format, approximately 150 pages long, the text is quite large, and the book is, as you'd hope and expect, heavily illustrated, largely with photos illustrating the step by step painting processes, this is a quick and easy read. I read the whole thing in a couple of hours.

There's a definite emphasis on simple practical advice, with a view to getting your miniatures painted and ready for action. That's all to the good. I don't know if somehow I missed it, but I was looking forward to the part where he was going to address motivation: 'I'll come back to talking about batch painting when we come to the 'keeping motivated' part of this book'. As that's a very live issue for me, my 6mm and 10mm Napoleonic armies languishing on the lead pile as they are. However, having made this mention of motivation, I don't recall seeing it addressed at any later point. 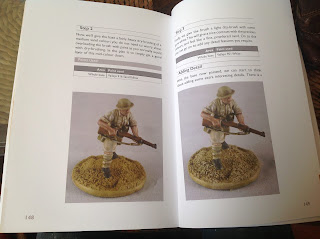 Most of the figures are primed in white or grey, a method I now use myself. However, he does his German Africa Korps figure (not the later fallschirmjäger) over a black primer base. I used to prime in black at one time. I think it was a Games Workshop thing, or maybe Peter Gilder did it? I believe the idea was that it helped pre-shade, and potentially delineate stuff. But studying Anthony Barton's beautifully sculpted and painted figures cured me of that! A black base dulls the following paint layers, whereas white or pale grey allows the colours to sing more openly/brightly.

I'd like to see similar titles on European theatres of WWII, and it'd be great if they addressed other scales, and perhaps even included the assembly and painting of resin figures. If like me you're building forces around 1/72 and 1/76 model tanks and other vehicles, resin figures from Milicast, Dan Taylor and the many Eastern European brands in these scales are a great improvement on the more 'quaintly old-fashioned' soft plastic 20mm figures that used to be a mainstay in this scale.

As Andy Singleton himself and the book jacket blurb says, there's an emphasis on 'achievable results', which should make this a very useful book for its target audience. For that goal, I'd score this four out of five. But for me, as a fussy and longer of tooth modeller and painter, and what with a few editorial gaffes (the usual spelling/grammar stuff, plus a few places where steps appear to be missing in certain guides), I'm going within three and a half balkenkreuz. 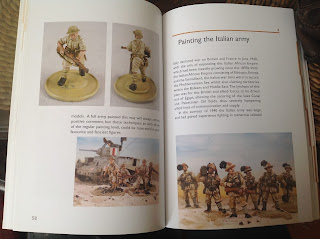