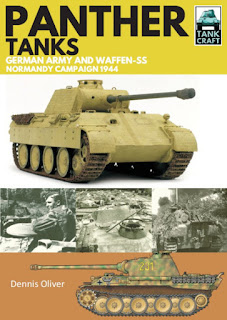 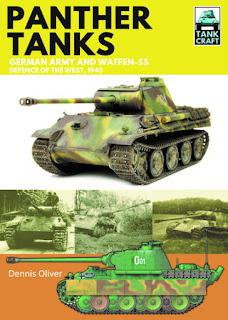 Taken together these two titles, numbers 3 and 18 in the Tank Craft series, give a very decent account of the Panther tank, as deployed on the Western Front circa '44-45. One might immediately think 'what then of the Panther's history and development before this, and it's service on the Southern and Eastern Fronts?' I'll return to these thoughts in due course.

As ever with Dennis Oliver, he deploys his own particular approach, utilising maps, timelines, organisational schematics, unit histories, and so on. Where he follows the standard Tank Craft template is in the central three segments: Camouflage and Markings, Model Showcase, and Modelling Products. 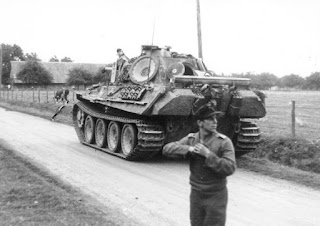 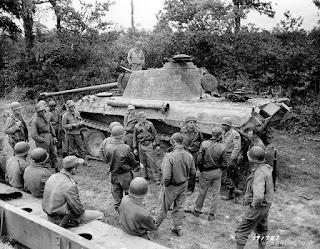 The Normandy title features five models, all in1/35, and all very impressive. The Defence of the West  book, on the other hand, has just two 1/35 models and a single 1/48 example, the latter getting more pages than are normally given over to any one model in the Showcase section. Between the two books that's eight models, all bar one in 1/35. I'd have liked to have seen at least one bigger kit, in 1/16, perhaps, and one or two smaller models, in 1/72 or 1/76.

The colour profiles in the Camouflage and Markings chapter are nicely done, and are both fascinating and exciting. The range of styles and approaches the Germans employed, despite a palette of just three basic colours (which admittedly varied in themselves) was very diverse and, I find, endlessly intriguing. My only gripe on this front is that either the work of the illustrator, or perhaps the printing process, has rendered the core trio of colours less than 100% satisfactorily. 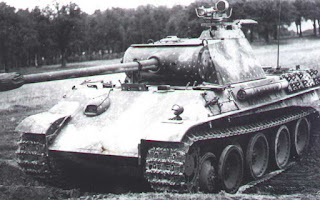 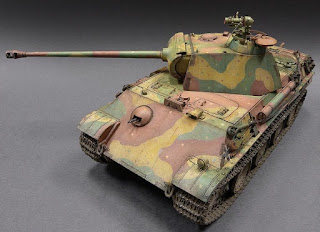 This is particularly noticeable with the green. The Dunkelgelb and Rotbrün, whilst only approximate, are near enough. But the green is way too light and bright. This is exaggerated even more in the bottom of the two cover images, shown at the top of this post (the Defence of the West one, sourced from Pen & Sword's own website listing for the book), where the green is almost fluorescent marker-pen bright! The actual books are closer colour-wise to the very top Normandy Campaign cover image. 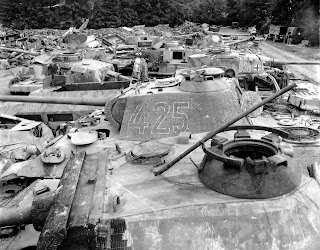 Panzer graveyard with Panthers in the foreground. 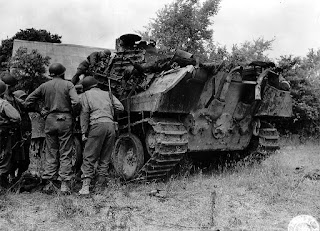 A grimmer graveyard scene. Is this 'Ursula' again? [3]

It's this colour issue that leads me to dock half a balkenkreuz. Whether Oliver's obsessively detailed coverage is a blessing or a curse - what of Panthers in Italy and Russia, and prior to '44? - depends on how much hardcore info you can take, and whether you can stretch to buying so many titles on the one vehicle.

At an RRP of £15 a time (£14.99 to be exact), they aren't exactly cheap! NB: at the time of posting this review both titles are available at reduced prices, at Pen & Sword's website. I'm lucky in that the publishers have been generous enough to send me copies gratis, for review. Otherwise I'd be lusting after these whilst lamenting the lack of brass in my pockets! Anyway, as regards useful info and inspiration, etc, these books are fab. And I'd highly recommend them.

Note on photos/pictures: in this post I've tried to use images that do appear in the books under review.  The two exceptions are the final black and white image above, and the colour picture of ChefLim's model, which is from his website.

[1] This picture appears in a smaller/cropped format.

[2] This superb model appears in the Showcase section of the Defence of the West title.

[3] The more eagle-eyed might notice that a charred corpse lies atop the rear deck of this knocked out tank. In fact more than one German soldier died on the back of this particular Panther - which may be 'Ursula', a Panther featured in Oliver's book on several different occasions - as other pictures I found online show clearly. A grisly reminder of the true nature and costs of war.
Posted by Seb Palmer at 23:53