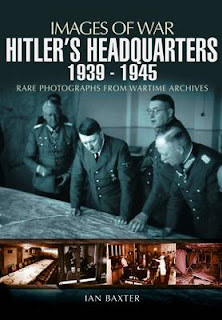 N.B. This is one of those occasional archival posts I do, started ages ago, and then forgotten about. Having subsequently read and reviewed another Ian Baxter Images of War title, I thought I'd return to the unfinished draft of this and get it done and online.

Having only just read Hugh Trevor Roper's book on Hitler's last days, I picked up a copy of this book cheap (I believe I paid £5), at a model show, some while back. If I'd paid the full retail asking price, I'd have been a bit miffed, for several reasons. So let's get the critical stuff out of the way.The first thing that struck me was how many pictures here aren't of the subject, but are just general WWII German stuff, only very tenuously connected to the books subject, if at all. That was after a first glance through the pictures. The second was the catalogue of typos, lumpen prose, and even captioning mistakes, when I came to read the text. There are, sadly, times when specialist literature such as this seems to slip through the editorial net. One does have to wonder, in an instance such as this, if an editor even looked at it. 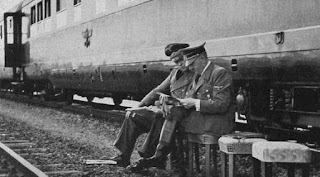 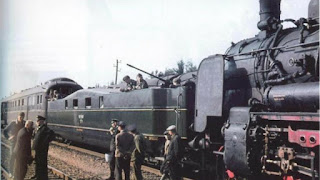 Nice colour photo of Amerika, showing the loco' and a flak carriage.
On the positive side, there is a good deal of info here on Hitlers numerous HQ, including a number of decent pictures, and this is a very fascinating topic. As well as the static installations, Hitler's trains are covered (although more and better info on this latter would've been good). Another plus is the then and now contrast, where the author shows some more recent images of what's become of some of these installations. Sadly, and creating historical lacunae, due to the toxicity of Hitler's racial/ideological policies, these fascinating and historically important sites are not being conserved (for fear they'd become celebrated/shrines to the Führer, etc.), in fact quite the reverse.Personally speaking, I think this instalment of the often very good Images of War series needs re-doing: editorially it needs correcting and tightening up, and pictorially it needs to be 'on topic' in a more focussed way. Plans of the various HQ, for example - surely they must exist? - would be a good addition. 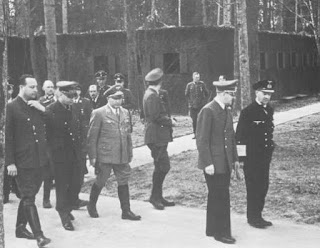 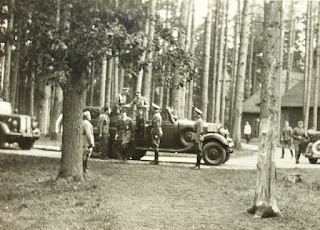 This arrival scene shows how heavily wooded the Wolf's Lair was. 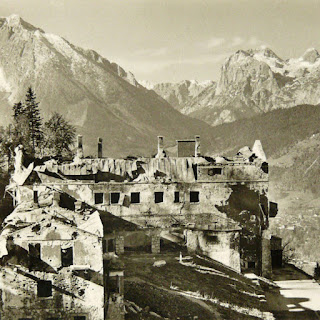 Bombed out remains at Obersalzberg, in the Bavarian Alps, 1945. 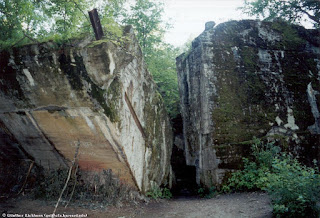 Baxter includes some of his own pictures, similar to the one above, showing Wolfschanze as it is now. The installations were gutted, dynamited, and left to be reclaimed by nature.
Posted by Seb Palmer at 12:59