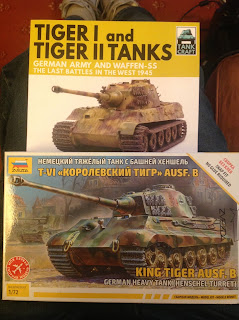 Enthused for all things Tiger Tank, by a combo of Bovington, and the book I just read/reviewed, I decided to make a start on my Zvezda snap-fit 1/72 King Tiger, Ausf. B.

I want this tank to have zimmerit, as I'm modelling it on the King Tiger in the Bovington Tiger Collection. So I've gone and done what I did with the Fujimi Elefant I built ages ago, which is to use a very thin layer of white Milliput and the tip of a tiny flathead screwdriver, to mimic the anti-magnetic mine paste. And boy, is it hard work! 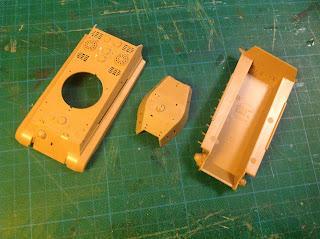 As you can see, no zimmerit on the Zvezda kit. 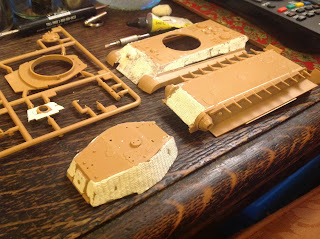 My DIY white Milliput zimmerit, on the appropriate surfaces.

I cleaned up the zimmerit, removing it from areas where it wouldn't be applied, and opening up various holes that the snap-fit kit requires. Now I'll have to exercise some restraint, and let the Milliput harden overnight.
----------

More snooker on TV, and more modelmaking on the sofa. Not the best for posture or lighting. And easy to lose bits of kit down the sofa! Still, fun stuff! Further work in the King Tiger finds me guiding the turret to near completion, and getting the running gear in place. 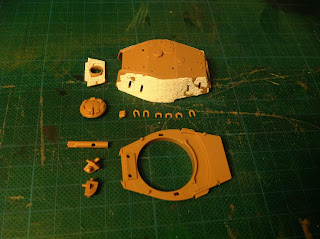 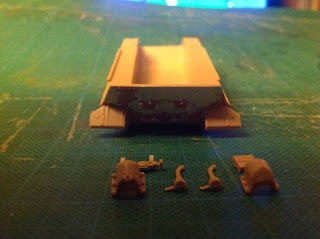 Components ready for the rear of the tank.

The snap-fit wheels and tracks are very interesting. Well designed, overall, but still awkward to install, and requiring trimming. At least that's what I've found. I do this modelling lark for fun. And yet sometimes, as when I was putting the tracks together, I began to wonder if it wasn't actually a form of masochism!? 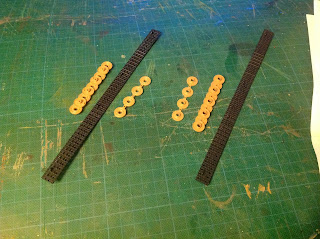 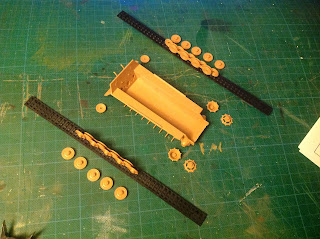 Getting the running-gear ready to put in place.

I decided to put all the spare track on the turret. I did consider leaving some off, and making it more like the Bovington King Tiger. But after the hard work on the running gears, I just wanted to take it easy. The barrel is nice and cleanly moulded. I drilled out the muzzle brake. And at close of play, it's a kit of three main parts: upper hall, lower hull, and turret. And then there's a load of stuff to put on the vehicle. The fully in-the-round sculpted tools, etc, look fab. 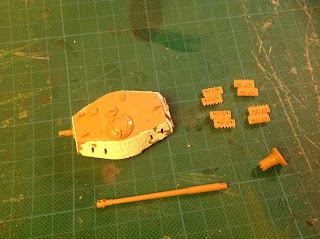 Next step in turret assemblage. 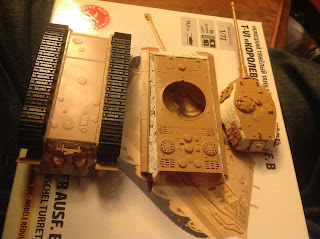 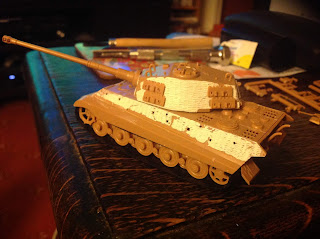 State of the model at close of play.

I put the three major elements together. But they remain unglued. It's just nice to see the vehicle taking shape. Tomorrow I'll add the remainder of the parts. Then I'll undercoat it in Halfords grey, and perhaps even get a base coat of dunkelgelb on. 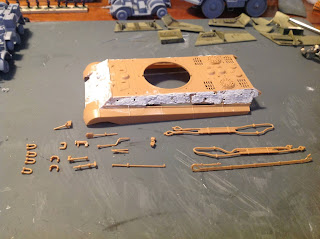 All the various doodads that go on the body. 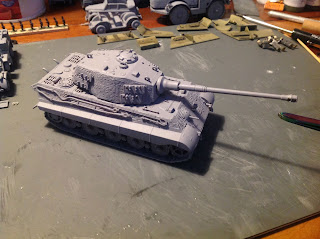 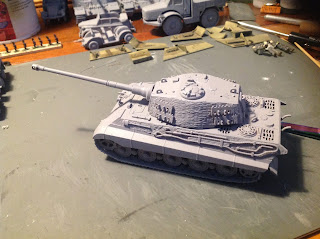 And the other side.

Some hours and a couple of Columbo episodes later, and I've also dunkelgelbed several models: two Elefant, the Radschlepper Ost, and the King Tiger. My aerosol of Tamiya dark yellow ran out, in fact. But I think I got everything adequately covered. 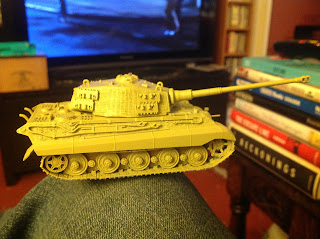 The colour looks a bit weird under the side lights. 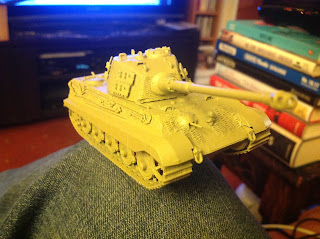 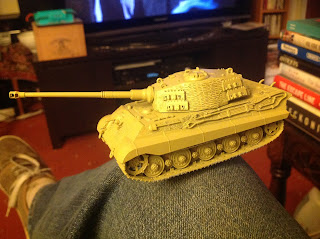 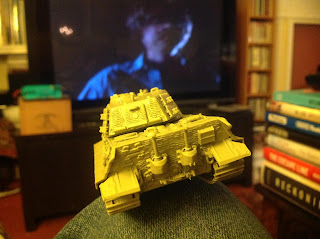 The King Tiger joins the ranks of ranks and other vehicles awaiting painting and decals. I think I might actually bite the bullet and try and do some painting tomorrow. It'd be nice to finish a couple of these recent builds.
Posted by Seb Palmer at 00:06