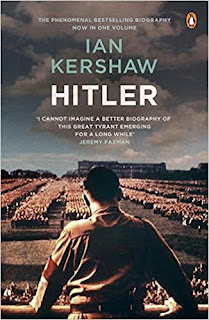 'an unimaginable harvest of sorrow ... a level of destruction never experienced in human history'

Whilst the quote at the top of this review is actually a truncated observation Kershaw makes regarding Operation Barbarossa, or the battle on the Eastern front, between Russia and the Third Reich, it could actually stand for the whole war, and the epoch of Nazism. Whilst Mao's China and Stalin's Russia can also boast death tolls that defy comprehension, yet still WWII - or Hitler's war, as it can be justly called - remains in a league of its own.

Compressing the two-volume Hubris and Nemesis into a single book, in large part by stripping out the 'scholarly apparatus' (footnotes, etc.), this single volume edition nonetheless remains a chunky tome, the main body of the text being just shy of 1,000 pages. In addition to the 969 pages of text there are 80 pages of black and white photos, and ten pages of fairly basic maps. 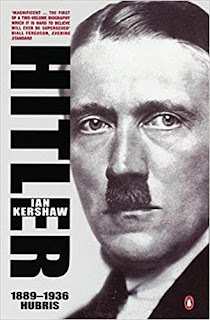 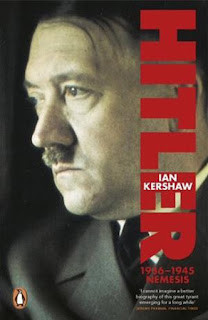 ... under the subtitles, Hubris and Nemesis.

This is a fascinating and compelling account of the man whose life story became a focal point in the unfolding of one of the twentieth century's greatest traumas. As Kershaw tells it Hitler's early unfocused slacker lifestyle was brought sharply into focus by WWI, during which he found a role, or position in society, that gave him purpose and direction, and his first real sense of self-esteem, having previously been something of a loner and failure as an artist in Vienna.

His sense of injustice at the outcome of WWI became a monomania, which he combined with a particularly virulent strain of antisemitism, both of these things seemingly commonplaces in German culture at the time, forming his lifelong creed: never again, Hitler swore, would Germany suffer the shame it had in 1918. And the alleged enemy, international Jewry - be they capitalist or Bolshevist (for many, but perhaps few or none more so than Hitler, the Jews were an all-purpose bogeyman) - would be made to pay. 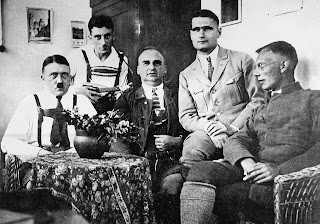 Hitler and croneys in prison, during his lederhosen period. [1]

Kershaw covers it all admirably thoroughly, if occasionally rather academically. One of the parts I find most fascinating, perhaps in part because I'm a bit of an art-school drop out, is Adolf's rise from art-school reject to beer hall demagogue, and ultimately Führer.

Early on in that 'resistible rise', during Hitler's interment - see the above photo - after his failed putsch (Munich, 1923), he wrote, or rather he dictated (how appropriate!) Mein Kampf, in which he laid out the manifesto he would later implement, seeking 'lebensraum' (living space) for Germany in 'the East', the east chiefly being Russia.

During this erratic and uncertain ascent a dynamic set in which, prior to 1941, seemed to some to cast Adolf as an infallible leader of indomitable will, but after that point rapidly overreached itself and unravelled, revealing itself to contain the seeds of its own destruction. 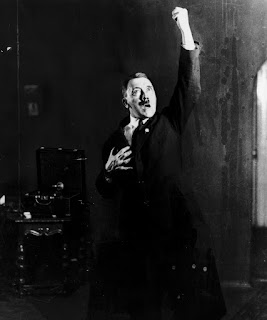 Hitler and a photographer rehearsing demagoguery. [2]

One of Kershaw's chief contributions to the massive literature on all things Third Reich appears to be the 'working towards the Führer' idea. I don't know if this is an original idea of his or not, and it does seem like just the kind of term to arise in academia. Kershaw's a professional academic as well as author.

I must admit such phrases often irk me somewhat, but it has to be conceded that it fits the bill here admirably. Kershaw is also very strong on the notion that Hitler achieved his form of leadership only by dissolving norms of government, such that the whole system inevitably evolved into a complete mess (and having recently read Albert Speer's Inside the Third Reich this clearly was the case), the only common thread in all the chaos being the clarity of 'working towards the Führer'.

I do have a few gripes: given the massive range of sources available, Kershaw's repeated recourse to Goebbel's diaries was at times so frequent as to be a little annoying. Also, in some areas - e.g. air warfare - he occasionally appears to be happy trotting out familiar clichés (which other books, for example Paul Overy's Bombing War, elucidate more accurately). But all things considered this is undoubtedly an excellent rendering of a hugely important and massively fascinating dark chapter of our recent history. 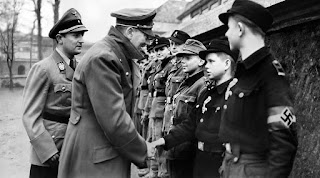 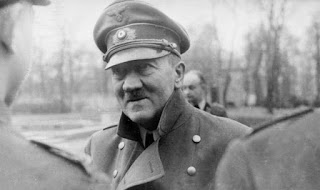 Despite the smile the strain is showing.

As a modeller and wargamer I love the German army in WWII, even the SS elements. But as a human being I also have to recognise what an appalling project they were serving. I once visited a concentration camp in Germany, and it was extremely sobering to stand on the very ground where unspeakable and barely believable barbarism occurred - and the camp I visited was only a 'transit' and not a 'death' camp - so close to home both in time and space.

One can only hope we might learn something from history. 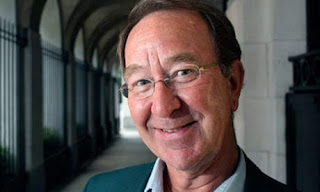 [1] Hitler in Landsberg prison, where he served time for treason after the failed Beer Hall Putsch. Left to right are Hitler, his chauffeur and Mein Kampf amanuensis (along with Hess) Emil Maurice, Herman Kriebl, Rudolf Hess and Friedrich Weber.

[2] One of a series of photos in which the aspiring politician practised his dark arts, and which he later sought to ban from public circulation. He also sought to suppress images such as the one below. 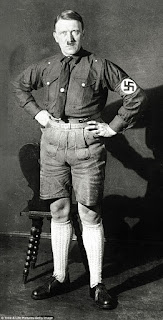 [3] This picture and the one below it, both from the same medal award ceremony, were taken on one of Hitlers's last days above ground, both literally and metaphorically. By this point the Russians were shelling Berlin, and Hitler, living deep below ground in his Reich Chancellory bunker, had just 10 days left.
Posted by Seb Palmer at 22:43