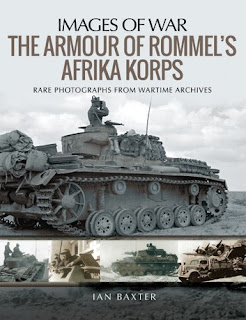 Author Ian Baxter's CV, as given in the front of this book, looks impressively diverse and prolific. I initially thought this might be my first book by him, but then realised I've got and have read his book from the same series about Hitler's various HQs.

The narrative element of the text is very minimal, being confined to three short year-themed chapters: Desert Blitzkrieg, 1941; Attack & Retreat, 1942; Destruction in Tunisia, 1943. A larger portion of text, by volume, is given over to the captions to the 161 or so black and white photos. 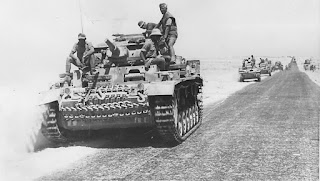 The Pz III, along with Pz IV, formed the backbone of DAK's armour. [1]

Titles in the Images Of War series pretty much always make the bold claim, as is the case here, that they feature 'rare and unpublished photographs'. Unlike Baxter, 'an avid collector of WW2 photographs' (according to the back cover blurb), I'm not expert enough to pass judgement on the truth or otherwise of this bold claim. But I will say that the more of these books I collect and read, I am impressed with how rarely I recognise pics from other sources.

As no picture sources are credited (they normally are in other titles from the Images of War series), I imagine these must all be from Baxter's personal collection. Sometimes being sourced this way can mean some of the pictures aren't of the highest quality. And there are a few here so blurred I'd have left them out myself. But by and large picture quality is acceptable through to very good. And there's an awful lot here for the military buff, modeller or wargamer to chew over, digest and enjoy. 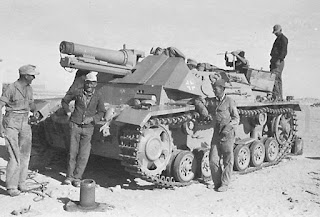 I think the use of the word armour in the title is possibly a little misleading because, as Baxter says in his intro, he covers everything from halftracks and wheeled reconnaissance vehicles to armoured cars, SPGs and tanks. To my mind the word armour conjures up tanks, and little else. On the other hand, whilst the vehicles pictured do include some motorcycles and softskins (cars and trucks, etc.), mostly it is armoured vehicles.

These range all the way through, from the early light Pz Is and IIs, to the medium IIIs and IVs, even including Tiger Is. Although, re the latter (and like so often with German tech), it was too little too late. Most of the vehicles here are very familiar. Less well known to me, and therefore more interesting, were the pics of Bison II SPGs. That's one I'm going to have to build in 1/72!

North Africa and the campaigns there have never drawn my interest as much as other theatres of WWII. And this book, as interesting and useful as it is, hasn't really changed that. But I do now feel I know a little more about the materiel Rommel and his fellow Germans (and to a much lesser degree the Italians) had to work with. 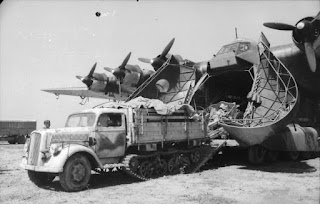 One of my favourite photographs shows a Me 323 Gigant disgorging an Opel Maultier towing an artillery piece. I like it because both the plane and the tracked truck are somewhat unusual, and both are quite striking looking. Another particularly good spread is a series of four photos showing a Tiger crew servicing/replacing an engine, and then having a well earned tuck break!

There's no index, glossary or bibliography, all of which would be useful. But there are three appendices, the first giving DAK OOB, and the second and third listing vehicle types and variants. Sadly this is one of these special interest books slightly marrred by lack of editorial finesse, with quite a lot of information in the captions being repeated, and a few too many spelling errors or questionable relations between captions and descriptions.

I read this in its entirety in just a couple of hours. There really isn't that much text. It's not the best written or most exciting WWII book I've read, by a long stretch. But it's still a good addition to the WWII history nut's book collection, mainly thanks to the images. 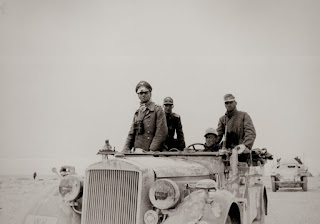 There are quite a lot of pictures of Rommel and other DAK (and even Italian) staff. [3]

[1] This is one of a number of pictures where the captioning seemed a bit off the mark. Described as having 'halted at the side of the road', the projectile clouds of dust and sand being fed through the the tracks on the right/starboard sides of the first two tanks suggests they're in fact in fairly rapid motion!

[2] This is an example of a picture that was easy to find online, being a Wikimedia Commons/Bundesarchiv image.

[3] Given the title of this book I thought there were a few too many shots of Rommel and/or brass in conference or reading maps. And again, the one shown above, which appears in the book, was relatively easy to find online.
Posted by Seb Palmer at 00:43