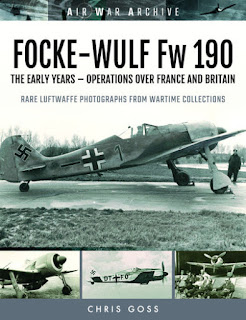 Author Chris Goss mentions in his Preface that he's indebted to Alfred Price for many of the images in this book. Both Goss and the late Price are or were Ex-RAF themselves, and appear to have shared a fascination - as do I - with the Luftwaffe in WWII. Goss states further that he dedicates this volume to his friend/mentor, and that the plan is for two such books, each of about 200 images, of which this is the first.

The subtitle of this book is The Early Years - Operations In The West, so I guess there should be that other volume in due course. Whilst this belongs to the Air War Archives series, from Frontline Books, it's very much in the same style or vein as Images of War, from Pen & Sword. And, like the latter, it is very decidedly more visual than textual. The bulk of the text, indeed, pretty much all of it, aside from the brief introduction, being the captions to the images, as opposed to the contextual info some other books in these two series provide. 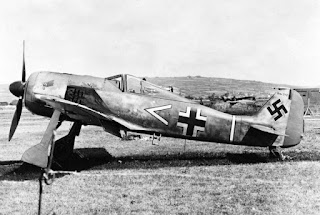 It's very good to see a glossary has been included. After that and the Intro, the chapters are as follows: Training, The Pembrey 190, Jagdgeschwader 2, Other Jagdgeschwader in NW Europe, Jabo, Reconaissance, The Med'. These chapter headings are kind of self-explanatory, and give a good idea as to the content you might expect. 'The Pembrey 190' is the only rather more obscure chapter heading, and is given on account of an Oberleutnant Armin Faber landing his Fw-190 at Pembrey airfield, in Southern Wales, thereby delivering the first intact plane of this sort into British hands, for examination and evaluation.

It seems to me that despite the Luftwaffe's intentions that the Fw-190 replace the Me-109, it is to the latter what the Hurricane has long been to the Spitfire, the less known or celebrated second-cousin. Just as the Hurricane is now being touted as superior to most Spitfire types, the Fw-190 is often described as superior to both the Me-109, and the Allied planes it met, when introduced into service. It's also alleged to have been more versatile, performing as fighter, fighter-bomber (or Jabo) and in reconnaissance and night-flying roles. 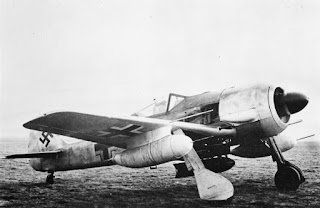 The pictures are fascinating, and great resources for modellers and wargamers, etc. It's also interesting to see and read about the fates of the men who flew in them, and all too often died in them. Some of those deaths may have been pretty mercifully instantaneous, but others, for example that of Oberfeldwebel Georg Schott - seen to bale out and get into his dinghy - may have been awfully protracted; Schott was shot down 27 Sept', '43, his dead body being recovered from his dinghy, washed ashore on the island of Sylt, 11 Oct', roughly a fortnight later.

I have a few 1/72 Fw-190 kits, and I may model them on individual planes mentioned here. One thing obviously lacking, however, from an entirely black and white book such as this, are the colour schemes a modeller will obviously want and need. But Therese are readily and plentifully available elsewhere. 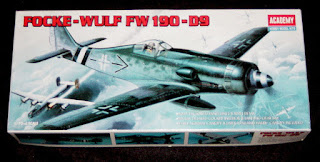 Not the greatest or most exciting of titles from the Air War Archives or Images of War series. But still a solid and useful contribution to the enthusiasts library.
Posted by Seb Palmer at 00:03