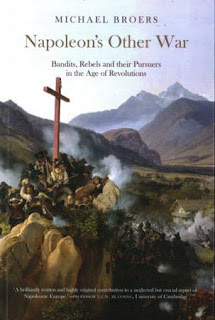 Broers shines a light into the murky corners of Napoleonic Europe, a place which, according to this excellent and unusual book, appears to have contained many such corners, largely populated by bandits and/or freedom fighters. This is very welcome, as one is forever reading about how such uprisings against occupiers were forever counted on, whether by Napoleon himself or (just as often) his enemies.

There are chapters, no surprises here, on Spain. Such activity in The Balkans, however, is less widely written about. Even South America figures in this story, an area poorly served in both popular and academic history of the era (at least as far as my knowledge of the period extends). I was particularly interested in the Tyrol (Andreas Hofer, etc.), and this was covered, but I would've liked more depth and detail on this era, as this didn't add that much beyond what I'd learned in Jack Gill's superb 1809 Thunder On The Danube trilogy. 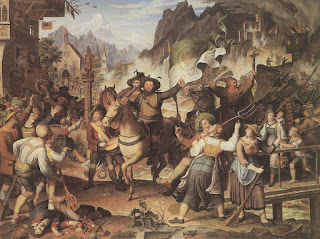 The very early chapters on the the unrest in France itself, which Broers - rather contentiously to my mind - describes as the 'cradle of unrest' are very detailed, compared to much of the rest of the book (which is a rather slim volume in the world of Napoleonic literature) and interesting. He often refers to the difficulty of judging whether the men, and very rarely even women, at the centre of these stories were merely lawless brigands, or perhaps sometimes genuine freedom fighters.

He notes that lawlessness was widespread under the 'old order' (hence my problem with his depiction of the undoubted unrest of revolution and subsequent near continuous war of the Napoleonic era as the wellspring of such activity), and gives due credit to both Napoleon and his gendarmes, etc., as helping forge the 'modern world' as we know it, in which law enforcement reaches deeper into all of society. 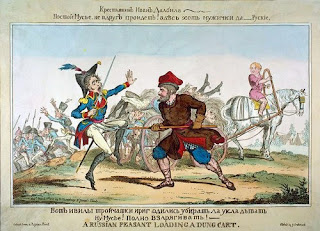 One of my main criticisms of this excellent book is its brevity. I could've enjoyed a lot more detail. Also there's a very large amount of repetition of certain ideas, which could've been trimmed and replaced with more detail on characters and events. I feel a little bad giving this just four bicornes, as I really enjoyed reading it, and it's almost alone in the easily available Napoleonic literature in devoting itself to such an important aspect of the period. The book is a very handsome hardback, with a beautiful cover showing Tyrolian guerillas, but there's the usual problem of not enough (or detailed enough) maps. 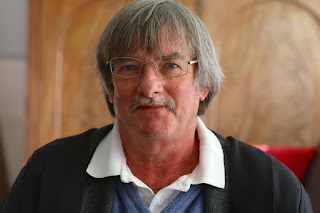 So, not without some issues that could be improved upon, but nonetheless an excellent, very interesting and very welcome book.

[1] Don't be fooled by the Cyrillic text. This is British establishment propaganda, from the hands of George Cruikshank. One things I don't recall now - as I'm posting this old review long after having read the book - is how much coverage there is of Russian 'brigandage'. Odd, really, given how that's one of my chief areas of interest... Hmmm? I'm tempted to say there can't have been very much, or I'd have made more mention of it in my review. However, in truth I can't recall. Might be due a re-visit?
Posted by Seb Palmer at 22:26

Email ThisBlogThis!Share to TwitterShare to FacebookShare to Pinterest
Labels: bandits rebels and their pursuers in the age of revolutions, book review, Europe, Michael Broers, Napoleon's Other War, Napoleonic