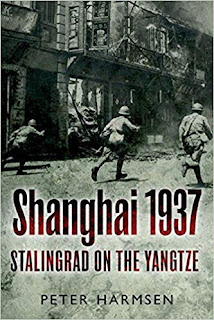 N.B. This is a re-posting of a pretty old review. Only very slightly amended.

Peter Harmsen's excellent book about the battle for Shangai - the first book solely on this subject outside of China, apparently - really puts flesh and blood (and a lot of the latter) on the bones of certain events I had only very recently read about, in Rana Mitter's equally excellent but very different book, China's War With Japan. Mitter gave us a splendid overview of the whole Sino-Japanese conflict but, despite his work being just a little shy of a hefty 500 pages, in covering the entire colossal struggle he didn't give that much space over to specific detail. Harmsen's book supplies exactly that, zooming in on one relatively short campaign in what was the longest contested theatre of war during WWII, and relating it very vividly. 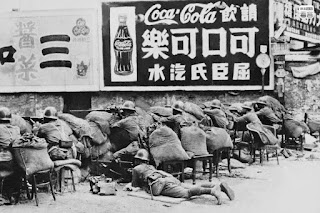 Rather than only sending troops to Manchuria, where the Japanese were busily expanding their Manchukuo puppet state, and thereby allowing Japan to continue casting events there as an isolated incident, China's nationalist leader Chiang Kai-shek decided to open a 'second front', in Shanghai. After years of prevaricating and concessions (Japan had annexed Manchuria in 1931), basically because China wasn't really ready for war, the Marco Polo bridge incident finally precipitated a decision to respond unequivocally to Japan's aggressive encroachments. But by drawing Japan into conflict in a new and more southerly theatre, rather than simply responding locally, China was able to surprise and unbalance their enemy at the same time as revealing Japanese belligerence and imperial ambitions for what they were. But the stakes were high, as this meant risking the loss of a major city in the heartland of the country, not far from the capital, Nanjing.

This much I'd learned already in Mitter's account. However, Harmsen starts his book, after a very brief prologue, with another lesser known incident, local to Shanghai, involving nefarious night time skulduggery, the end result of which is three corpses, two of which are Japanese military personnel, and the third a Chinese of uncertain identity. The riddle of the events that lead to these deaths is never satisfactorily resolved, but they may have constituted the final straw that broke the camel's back. Harmsen narrates these events, making great use of contemporary accounts, in a way that means his story begins rather like a thriller. 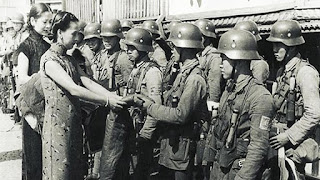 Not sure what this photo depicts: Chinese matrons encouraging boy soldiers, is what it appears to show.

I won't relate the blow by blow progress of the actions covered here, as Harmsen does that so well you should really buy the book and enjoy the unfolding of the story for yourself. I found it utterly gripping, by turns thrilling and chilling. Reading about these and similar events in Mitter's book was fascinating, but despite the many instances where large casualty figures are given, and mention of the hand-wringing of figures like Chiang Kai-shek over the huge human sacrifices being made*, one simply doesn't get a visceral sense of the human dimension without going into nitty-gritty detail. Harmsen's detailed evocation of the events of the first few days of the conflict in Shanghai remedies that immediately.

Depth of detail is maintained throughout, with numerous personalised interludes recounting the firsthand experiences of a large and varied number of key protagonists. These are drawn from a remarkably diverse range of sources, including the memoirs and media of both sides, from privates to generals, and also the international observers, such as the Germans attached to the Chinese forces, or the members of the International Settlement, or representatives of the native and Western press. Harmsen's research has obviously been a long time in the preparing, and he marshals these resources superbly. In fact his adroit use of these resources reminds me of Paul Britten Austin's masterful 1812 trilogy, which that author described as a "word film". The effect is very evocative, and really draws one into the events described. 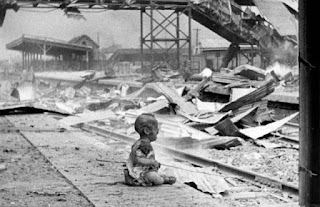 A poignnant image of  the terrible results of urban warfare.

The cost in Shanghai was terrible, and this book certainly doesn't shy away from the gory details. There's something almost surreal about the status of the many members of the International Settlement's very mixed community, as they sit and watch, on the edge of one of the world's first modern urban battles. They are occasionally drawn in, as at the beginning, on 'Black Saturday', and on occasion throughout the battle, and some of this detail is as shocking as the horrors of the official war zones. Towards the end of the book one of these foreign observers, Liliane Williams, then just a six year old girl, is quoted. Having seen the ruins of Shanghai after the battle: "I suddenly understood that wars meant the killing of real people, not death toll statistics printed in newspapers and mentioned on the radio." 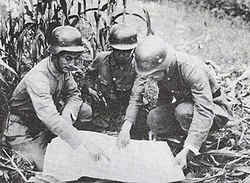 There are plenty of useful maps, quite a lot of splendidly evocative black and white photos (some Chinese troops wore WWII German style helmets, some English!), and even OOB's, 'order of battle', for both sides. Harmsen's book really succeeds, for me, in bringing home the visceral impact of both this campaign and the larger war. This makes it both an ideal companion to Mitter's book, the former giving one the larger picture, the latter bringing one event in that huge mosaic very vividly to life, or an excellent standalone point of entry into this fascinating conflict about which we in the west know so little at present. These books have really educated me. I now no longer see Poland 1939 as the definitive start of WWII, rather I think it was in China, in Manchuria and Shanghai, that this global conflagration really began. I look forward to reading more on the subject! 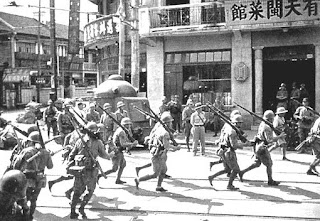 * One of Harmsen's chapter titles, 'Flesh Against Steel', alludes to the fact that the Chinese were extremely profligate with men, a resource they had in abundance, whilst rather miserly with expensive and hard to replace materiel. In the former they way outnumbered the Japanese, whilst regarding the latter, they were totally outgunned, Japan's naval artillery, tanks, and near total air-supremacy playing key parts in their technological dominance of this stage of the war. 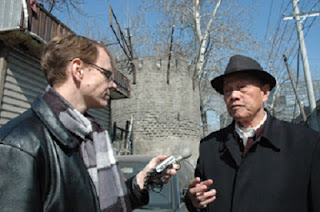 Author Peter Harmsen, left, in his role as journalist.