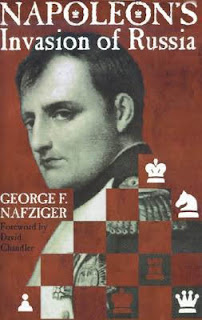 A useful but challenging read. Nafziger's data heavy account of 1812 is occasionally exciting, but always exhausting in its detail.


I've wanted this particular title for my growing Russia 1812 library for years. As long as I've known of it the cover has held a certain charm, for one thing. But usually I couldn't even find it, and then when I occasionally did it was priced around £15-20, or more, either online or at wargaming shows. So I was very chuffed when I spotted it on a haberdashery stall, of all places, at a local 1940s show, and they were only asking... 50p!

And I'm damn glad I only paid that amount, 'cause if I'd paid £15-20, I'd have resented it. Sure, it's a treasure trove of data, but it's not a particularly easy or inspiring narrative. I mean no offence to  George F. Nafziger, who clearly knows and loves his subject - and who's clearly also a data junkie - but this book [1] is amongst the most densely turgid on the subject I've waded through [2].

In places I did really enjoy it. It is, for example, better than many accounts of this capaign in including coverage of what went on to the north and south of Napoleon's main central forces. But at other times it worked as one of the most powerful soporifics I've ever encountered. If I were a doctor, I'd prescribe this to anyone with sleeping issues. In fact - and I jest not - I do suffer that way, and I have intentionally used this book to put myself out. It never fails! 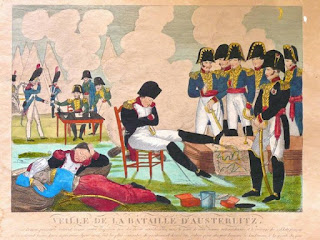 Napoleon takes a nap, on the eve of Austerlitz. Has he been reading Nafziger?

Of the more than 700 pages, only the first 300 or so, or roughly fifty percent, comprise the narrative, the remainder of the book being made up of maps, OOBs, and numerous other forms of pertinent data. I'm building miniature armies and planning to wargame several key events from the 1812 campaign in Russia, and I imagine I'll refer to this other material when I really get stuck into that.

But, for the time being, I have to confess that it was with great relief that I 'finished', i.e. reached the end of the narrative segment, of this factually informative but rather leaden account of what is, as David Chandler says in his intro, an endlessly fascinating campaign. 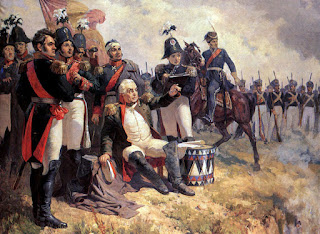 Kutusov, and the Russian brass. [3]

I still love the cover. And I'm glad to have this useful resource as part of my Russia 1812 arsenal. But the density of movement, location and unit info was, speaking frankly, a real slog to get through, and the writing itself would've benefitted from more editorial intervention (to remedy occasional lack of clarity, frequent repetition, etc.).

If you were coming to this subject fresh, I'd recommend Zamoyski's exciting 1812, or Paul Britten Austin's fabulous and epic 'word-film'. I'm only an interested amateur/dilettante myself, and I deeply admire and respect Nafziger's accomplishment in marshalling all the information [4], as well as sharing his passion for the subject. This is one for hardcore buffs only! 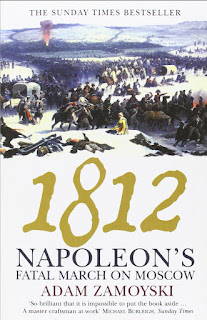 A much easier, more exciting entree to this subject.

[1] I think I've read somewhere that this is/was his first major publication/work.

[2] So far only Clausewitz's account of the 1812 campaign has been harder/heavier going.

[3] One of this book's strengths is the insight into and coverage of Russian command and movement. Where many accounts are markedly Franco-centric, this is pretty evenly balanced.

[4] Apart from his numerous books and translations, Nafziger is known to many for his unbelievable collection of historical OOBs, which he's made freely available online. 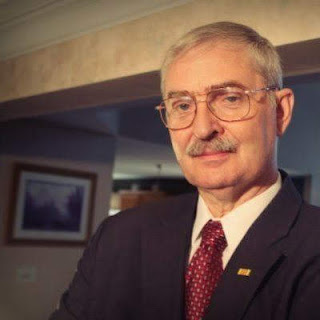