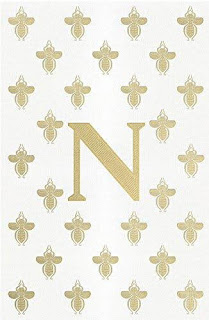 Some years back now, Andrew Roberts produced this whopping great tome on 'The Little Corporal', for all of us Napoleonic history nuts to add to our already sagging shelves.

I was mightily miffed at the time, as, shortly after shelling out top dollar for the extremely handsome hardback, it was offered free to numerous Amazon Vine reviewers, of which I'm one... but not to me. I suspect that I'm one of the most Napoleon-obsessed reviewers on the Vine programme. It still rankles, thinking about it, even now. 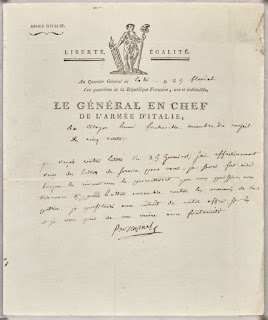 An early example of Bonaparte's correspondence.*

Roberts says he drew heavily on the recently augmented/republished letters of Napoleon, who was legendary for his voluminous correspondence, when writing this book. It's interesting to see how he, Roberts that is, has changed his tune, re Napoleon; in his much smaller book on Churchill and Hitler and their leadership styles, published some years earlier, he was quite dismissive, referring to 'otherwise intelligent' people (or some such similar phrase) being seduced by the Napoleonic myth, or aura. 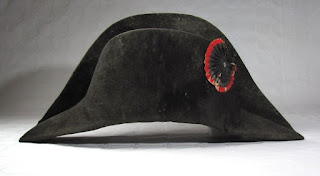 He's subsequently said, in several TV and radio appearances around the time this much larger book came out, that researching his subject brought him round to a position of awe and admiration. And that's a good thing, I think, as a lot of British and American authors writing on Napoleon, from Corelli Barnett to Stephen Pinker, have sought to perpetuate the view of Napoleon as little more than a bloodthirsty warmonger, a picture not very far from the pure propaganda of the Gillray cartoons, or the 'Black Legend' of the era itself. 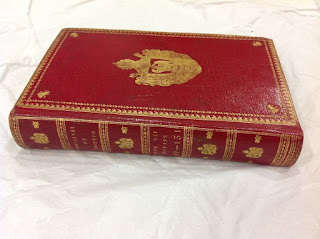 A volume of the the Code Civil.*

Roberts writes well, balancing his scholarly credentials with a style sufficiently straightforward and exciting to keep the reader jogging along nicely. It's clear he relishes the military side of the story, which he relates very well. But he also covers the other bases, such as Napoleon the politician, law-maker, and even husband, father, and so on. Indeed, one of the areas where Roberts does allow himself to partake of traditional criticisms is Napoleon's oft ill-advised use of his family.

An example of the Legion d'Honneur.*

I really enjoyed this book, and whilst in many areas it simply relates things already covered by other writers, Roberts' enthusiasm for his subject helps makes this a worthwhile read. In researching and writing this pretty hefty work Roberts clearly came to view Napoleon as a 'Great Man', hence the title. This is by no means a hagiography, but I think he makes a pretty solid case that if anyone of the period deserves to be called The Great, Napoleon would be that man. 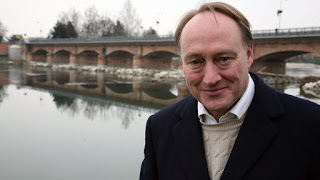 * Apart from the cover and author pics, images accompanying this post were cilled from the Fondation Napoleon website.