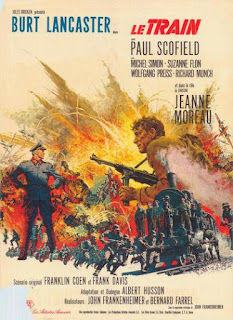 This black and white movie, which stars Burt Lancaster as French railway controller Labiche, is really rather good. On the one hand it's just a ripping good yarn, with noir-ish thriller-like vibes, an aspect augmented by the monochrome styling. But on the other it juxtaposes two very different sets of moral/aesthetic value systems. And, to my mind, the film works pretty well on both levels. 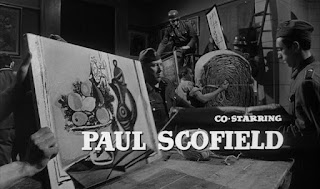 The Germans gathering up the art loot as the titles roll. 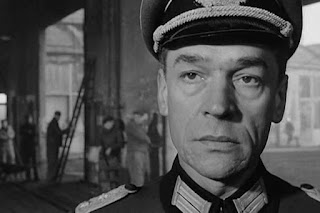 Initially Lancaster, a railway man who is also acting as an underground resistance organiser, couldn't care less about the art that a Nazi general is seeking to remove by train to Berlin. He wonders, quite understandably, why lives should be risked for the obscure and possibly dubious daubings of such modern masters as Matisse, Cézanne, Picasso, Braque, or whoever. But gradually he's drawn ever deeper into this new and unusual mission, responding more to the escalating human costs than the value of the art itself. 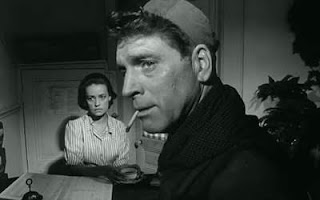 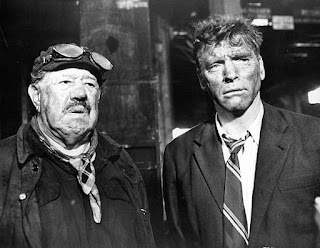 The fabulously knobbly Michel Simon, and the craggily handsome Burt. 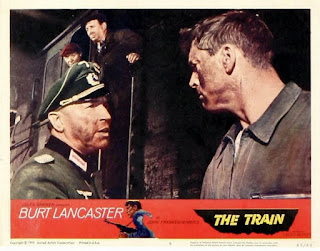 Whatever his own position in regard to the latter - a position his taciturn man of action allows the film to leave ambivalently unstated - the film as a whole sets up a pointed contrast between the more liberal/democratic idea of preserving 'great art' for the benefit of all, as embodied in the female curator character, vs. the elitism of the Nazi worldview, exemplified by Paul Scofield's Von Waldheim, in which some art (inc. the cargo of The Train) is, despite being considered 'degenerate', something only the right kind of connoisseur - i.e. the aryan 'übermensch' - can properly appreciate. Indeed, only this higher breed even have the capacity for discerning between the good and bad stuff. 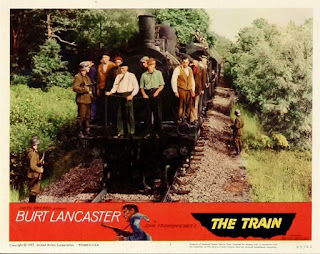 The dastardly Hun uses French folk as a human shield. 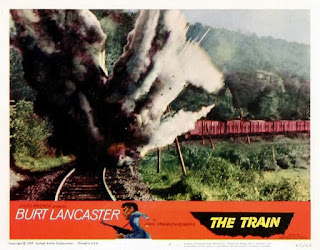 But the resistance attack anyway.

Before returning to this theme, it's worth pausing to note that The Train benefits from a good deal of great acting - some of the supporting actors are superb, the port-nosed French engine driver played by Michel Simon being particularly terrific - good direction; an interesting plot; and it's beautifully shot and put together. And, without wishing to give too much away, in the end, Lancaster's rugged taciturn hero eventually answers that thorny conundrum of the value of art vs. the value of life, a question that has vexed philosophers down the ages, with ... a sub-machine-gun. 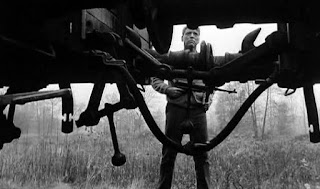 An iconic image, as the 'showdown' approaches. 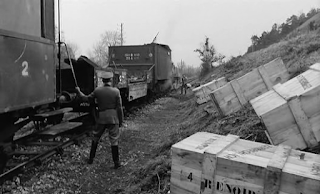 Waldheim has remained with the train/art. 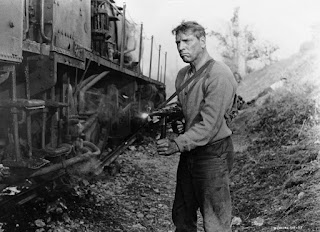 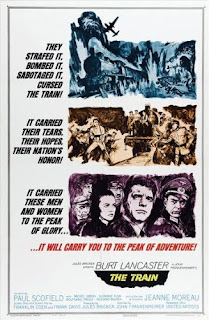 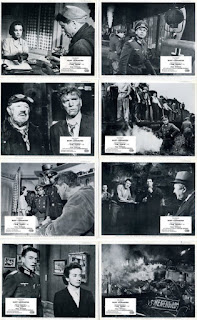 I love these old lobby cards! 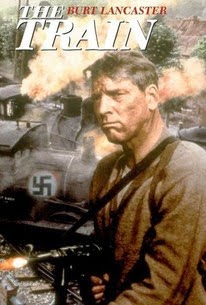