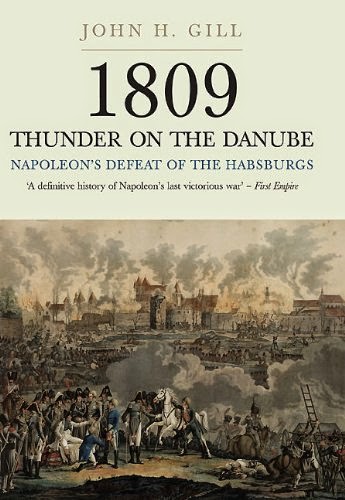 This first volume sets the tone and pace for the whole trilogy. The tone is serious but relaxed, even refreshingly informal at times, and the pace is perfectly pitched between feeling brisk in terms of excitement and leisurely in terms of Gill taking his time and covering everything. Superb!

Volume one of Gill's trilogy starts with detailed and lengthy but nonetheless very necessary and interesting expositions of the state of things leading up to the war. Summarised as concisely as I can, it boils down to Johann Phillip Stadion egging on the Austrian pro-war faction, using Napoleon's setbacks in Spain as inspiration, against the better judgement of both Archduke Charles, to whom leading the Austrians into war would fall, and The Kaiser. Stadion and the pro-war faction were woefully out of touch with the political and military realities, such that many Austrians felt, in the words of general and rising star Joseph Radetzky, 'the campaign of 1809 was lost before it began'. 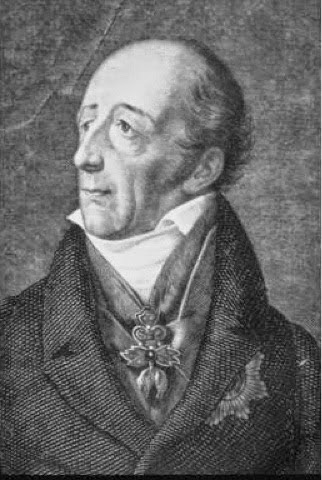 Once Gill gets stuck into the campaign action you feel he's really in his element - although in fairness to him he does the political preludes just as well - and for many of his readers, lee joss especially is wargamers, this will be where the excitement and interest ratchets up a gear or three. Be warned, Gill's account is very detailed! Almost all 'actions' are covered, and names of commanders, units and places are assiduously given. This is commendably thorough, but might perhaps be a touch too much for the general reader.

Connected to this is a problem that I feel nearly all military history books (or for that matter history books in general) suffer from, namely inadequate maps. There are plenty of decent maps here, but the number of times - and consequently the waste of time & frustration - I couldn't find a place referred to in the text on any of the maps... Well, it was quite galling, and makes taking the level of interest in detail required by the text a shade redundant at times.

However, this gripe aside, and duly noting that there are more and better maps here than in most books on similar subject matter, the remainder of what's on offer here is great. Having set the scene Gill gets stuck into the manoeuvres and combat, in great detail. Perhaps for some this 'buffish' fixation on detail might be too much, but personally I prefer it to the drier overviews of the sort given in books like Napoleon's Wars, or Clausewitz's almost unreadably stodgy account of the 1812 campaign in Russia. 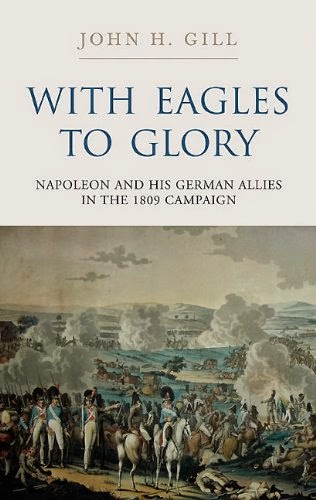 But Gill is meeting the needs of the more seriously interested reader, spreading his work over three volumes (four if you includes With Eagles To Glory, his companion piece on France's German allies), and does a great job.[2] One consequence of the level of detail is that, certainly in Volume I at any rate, a sizeable proportion - a good third in this case - of the book is given over to hyper-detailed appendices and notes, including, of vital importance to the wargamers who'll love these books, OOB, or 'orders of battle'.

As well as being almost overwhelmingly thorough, these books are well-written, Gill possessing an amiable tone and quoting diverse sources to good effect, well put together: as well as being beautifully bound and printed, there are the maps, a table explaining rank titles and abbreviations, some good black and white illustrations, and extensive notes. My only complaint on this front is that the index isn't very comprehensive. But best of all, this book - indeed the whole trilogy - is just plain enjoyable.

Personally I'd have preferred the copious notes (there are 120 pages of them!) to have been footnotes at the bottom of each page, a la Gibbons Decline & Fall, rather than gathered as they are at the back. On this, my first reading of the book, I hardly referred to them at all. But its good they're there, as one can return to them as and when one feels ready. There are also sixty pages of appendices (which is where you'll find the OOB etc.), so the detail is, to say the least, copiously comprehensive.

To summarise: vol. I deals with the diplomacy and politics that lead to the outbreak of the 1809 conflict, culminating in Abensberg, the first major battle of the campaign. Stylistically it sets you up nicely for the next two vloumes. I vividly remember how exciting I found reading this. I had planned to ration my reading of the series, but this was so gripping I read it quicker than I'd intended to, and then went out and bought the other two volumes as soon as I'd finished it! 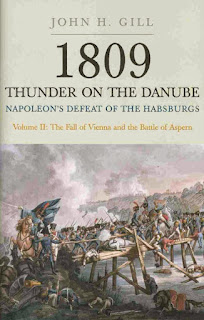 Vol. II - The Fall of Vienna & The Battle of Aspern

Basically a book of two halves, not counting the full third of the book given over, as with Vol. I to very thorough OOBs etc. in the appendices.

The first half picks up post Abensberg, with the bloody fight at Evelsburg a major feature, followed by Napoleon's drive on Vienna and the citys capitulation. Bonaparte, ever desirous of a swift end to a war he hadn't wanted in the first place, then encounters his own misfortune, when his hastily constructed pontoon bridges are damaged. Because of this he fails to deliver adequate reinforcements to his spearhead, leaving himself stranded on the Lobau/Mühlau bridgehead with insufficient troops, culminating in his first serious reversal after years of victories, at the battle of Aspern-Essling.

A second smaller 'half' then details the events in Northern Italy, as Archduke Johann and Viceroy Eugene come to blows. Again it's reiterated, as on p. 269 that 'Vienna's choice of war under the circumstances prevailing in 1809 was an error of grand-strategic magnitude.' The excellent standard of volume I is maintained, and the level of detail remains obsessively impressive, if at times a little overwhelming. For me the centrepiece of this volume is Gill's brilliant blow-by-blow account of Aspern-Essling, which is really gripping stuff.

As with Vol. I, upon finishing this I was eager to get stuck into the next one! 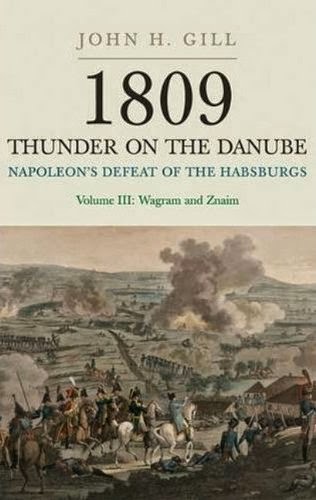 As Gill says in the preface to his third volume, his is a traditional campaign narrative and, given that war 'is fundamentally about combat... solid battle narrative is indispensable'. Indeed. Wargamers will be pleased to read this! And fortunately this is also an area in which Gill excels.

Vol. III starts with action in the peripheral/flanking theatres, some of which, for example the violence and brigandage in the Tyrol, begs further exploration [3]. Gill covers even these 'sideshows' with care and attention, and many great ground level details emerge, showing that when he says 'solid battle narrative is indispensable' he means it. Just one particular example that I really enjoyed was when, in a very minor engagement in the Tyrol, the French/Allied commander, Jean-Baptiste Dominique Rusca had to 'resort to the unusual command and control expedient of dropping his instructions to waiting orderlies in small packets weighted with stones', as he directed his meagre forces from the commanding view of a tower in Klangenfurt!

Equally fascinating as these little details are the pictures Gill paints on the grander scale, such as Napoleon's turning of the isle of Lobau into a veritable military city, complete with defences, logistics (with forges and bakeries as well as lodgings, hospitals and munitions magazines), roads and even street lamps! Having got a bloody nose at Aspern-Essling, attempting his typically impetuous - and in this instance under-prepared - lightning strike, he did things very thoroughly second time around. This included using 'estacades', which were rows of pilings sunk into the Danube, whose purpose was to stop the crossings being wrecked by flotsam and jetsam as had happened prior to and during Aspern Essling.

And the two largest bridges themselves (Gill includes a black and white illustration of a print after the painting by Jacques Francois Joseph, the original of which can be seen at Apsley House, AKA The Wellington Museum, in London) were so well-built and finished that they were deemed more than just sturdily functional but, painted and hung with lanterns, elegant! Boney's himself effused 'General Count Bertrand has executed works that excite astonishment and inspire admiration.' Comparing the dynamism of the French efforts with the sluggish, pessimistic confusion of the Austrians, one senses that the campaign was already over. Gill articulates this himself perfectly: 'The contrast with his Hapsburg opponents is striking. Where the French built their own boats and bridges, the Austrians complained that none were to be found.'

The chapter on Wagram is superb, balancing fine detail with the bigger picture in exemplary manner. There are so many little details that one could cite, but you'd be better off reading them yourself, rather than me trying to recite them. I will mention the intervention of the weather on numerous occasions, a feature which is so significant it gives the series it's evocative double-entendre title, and is further cited in several chapter sub-headings ('A night out of Macbeth', 'Thunder in Bayreuth', etc.) and, together with the varied landscapes gives great character and vivacity to Gill's narrative.

All in all, an excellent ending to a fantastic trilogy.

[1] Charles Esdaile goes into great detail, but only as regards diplomacy, whilst the vast majority of Clausewitz's account is little more than a list of detailed troops movements which, without good maps, is as good a way to develop a migraine as I know of.

[2] For the interested layman books like Zamoyski's 1812, or Barbero's Waterloo are absolutely perfect, being perfectly balanced, beautifully written, and concise and easy to read. This book has all the qualities mentioned here, except brevity! 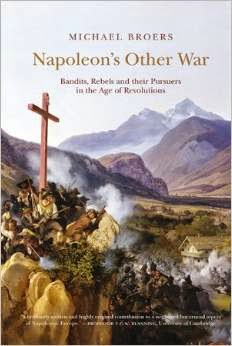 [3] After reading this trilogy I ordered Napoleon's Other War, by Michael Broers, which covers this and many other guerilla actions of the Napoleonic period. I reviewed that on the Amazon UK website for anyone interested: Napoleon's Other Wars, Michael Broers. It's an excellent book, but I was a touch disappointed that there wasn't more on the whole Andreas Hofer period, and related Austria 1809 episodes. Gill's accounts are at least as (and perhaps more?) informative on this topic.
Posted by Seb Palmer at 22:06