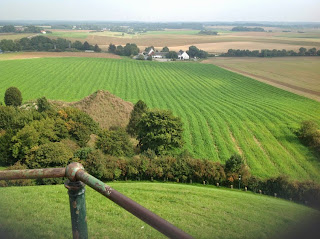 My wife and I have just finished making our arrangements for a short stay in Belgium near Waterloo over the bicentennial period. We - or rather I - left it pretty late, but it's all sorted now... phew!

I noticed, thanks to a post over at TMP, that bloggers had met up at Salute 2015. I was miffed that I hadn't known about that, as I'm new to wargame blogging, having only stared last year, and would love to have met up with fellow bloggers at Salute. 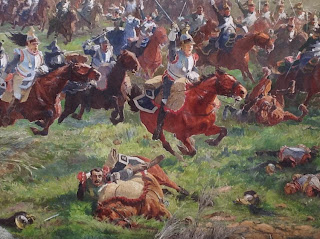 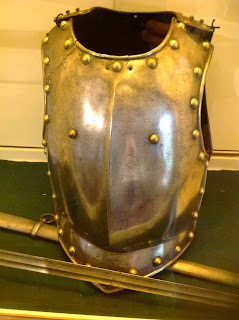 A French cuirassier's cuirass, sword and scabbard;
can't recall if this was at La Caillou or the Wellington
Museum now; can anyone else put me right? 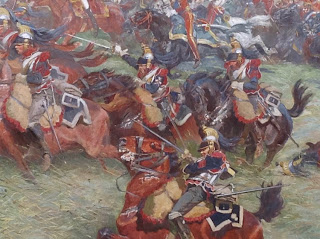 Fantastic! Or perhaps I should say 'superbe'!?

So, I thought I'd tentatively extend the furry hand of friendship in relation to our Waterloo trip. My vague thoughts at this stage are to perhaps suggest a meeting somewhere the day after the battle, the 19th June, to chat about and compare notes re the 18th. Please contact me here via my blog if this would be of interest, or to let us know if something like this is already being arranged by someone else, so we don't miss out on this as well! 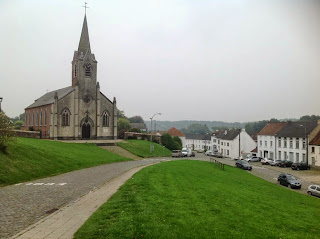 We visited Plancenoit. This is the church there. 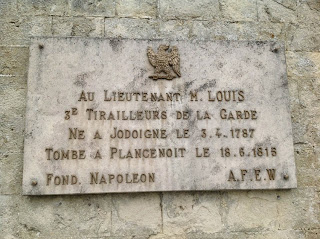 I found this plaque on the wall of the above church.

We went to Waterloo and environs last year, as a kind of recce I guess. There is (or was?)* a pub/restaurant at the Lion Mound hamlet, and a café nearby. Mind you, they are neither the greatest of venues. At least the pub is quite large. The café is tiny! Does anyone with better local knowledge have any suggestions as to the best (nicest) potential site for a meet-up? My memory's hazy at this time of the morning, but isn't one of the buildings on the central road a café/restaurant now?

Anyhoo...I'd be interested to hear from anyone else who'll be making the pilgrimage, and I do hope some of us can meet and share our enthusiasm on the battlefield.

Sebastian
* The whole site's being redeveloped; I'm not sure what changes have been made, other than there being a new larger (underground!?) visitor centre.
UPDATE: Since first posting on this topic I found out, via a thread I'd started at TMP, that the re-enactment events at the Waterloo bicentenary were ticketed. After an initial panic I was able to book tickets - almost all of which had, by then, sold out. I think we probably would've been ok just being in the area at the time. But as I'd been intending to watch the battle it would've been disappointing not to have had access to the battlefield. As it turns out we'll have access to the 'bivouac' area on the evening of the 18th, after which there's an opening ceremony (a rather showbiz looking affair called 'inferno'!), and our tickets include that as well. They also include a 'French attack' re-enactment on the 19th, which I'm very much looking forward to.

PS - I thought I'd jazz up this post with a few pics from our September 2014 visit. 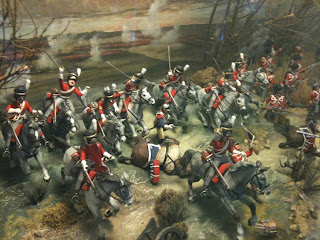 One of several small dioramas in the Waterloo battlefield area.
I forget where we saw this one. Probably at the Wellington
Museum in Waterloo itself. Can anyone confirm? 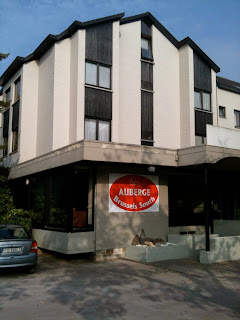 This is where we stayed (they advertise themselves as 'residence
Brussels South') on our 2014 visit. We would've stayed here
again, only we appear to have left it too late, as all the rooms
were already booked.
Posted by Seb Palmer at 08:06