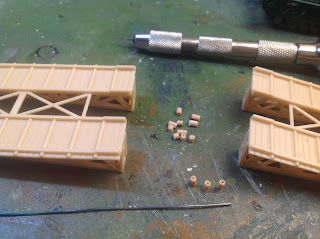 Making tubular bits of sprue for my scratch-built hinges.


This 1/76 Churchill AVRE is bound to take a bit longer than a normal build, on account of the bridge. Particularly so as I'm trying to make it deployable. To do this I decided to build two little hinges on the underside of the bridge. This has been both challenging and fun. I probably should've tried to rig some sort of reliably accurate vertically aligned drill-press. But I felt that'd be too time-consuming, so I just pressed on - boom, boom! - with freehand attempts. 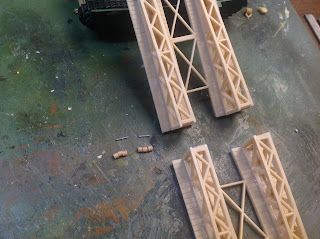 
After a lot of fiddly freehand drilling, and many failed off-centre bits of sprue, I finally got six pieces I felt were good enough to use. Gluing these to the bridge required shaving off some bits of the structure where the hinges would sit. Then I had to glue them in place accurately positioned enough that the 0.6mm central hole would align through all the segments. This wasn't easy! Especially as the holes weren't perfectly central on any of the parts to start with. 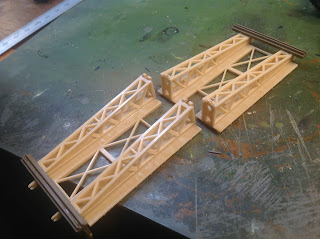 Hinge elements being glued in place. 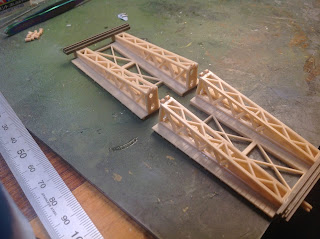 
I then made two pins, approx' 0.5mm in diameter, and roughly 6mm long. These go through the little tubular sprue sections, forming the hinges. Getting these in was tricky, as the central holes weren't perfectly aligned. But with a little gentle persuasion I managed it. This first attempt resulted in one fully functional hinge, and one which failed. 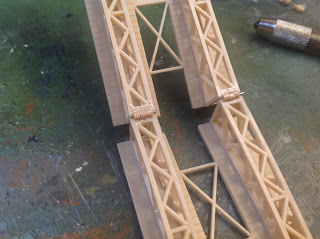 Sliding the pins into the hinges.


The hinge that failed is on the right in the above picture (and is the upper hinge in the photo below). What happened was the central tubular piece got glued to the outer two pieces, resulting in one big block, which then sheared off from the bridge when I attempted to test the moving parts.

I decided to try and keep the successful hinge, and remove the central part of the failed one, and work on it - reducing the width a fraction and widening the central hole by 0.1mm - before re-assembling it. I also reinforced the central tubular parts on both sides of the bridge, as these are the weakest, and most likely to fail. 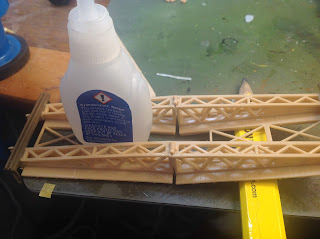 The hinges, glued, ready for testing.


Below is the dis-assembled hinging mechanism. The two hinges have been very slightly worked on, in particular the upper of the two, i.e. the one that failed. I'll give that a good few hours to cement. And then I'll re-insert the metal pins, and hope that the hinges won't break! I'm thinking I may add end-caps to either one or most likely both sides of the hinges as well, to prevent the pins from working their way out. 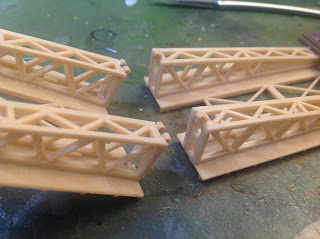 
Patience is paramount! I must give the repaired hinge time to really set. It's not easy to leave it alone! If I'm successful, the next thing is either mounting the whole bridge to the tank, or painting both tank and bridge before attempting to do so. Hmm!? I reckon the latter is probably the more sensible option... but...