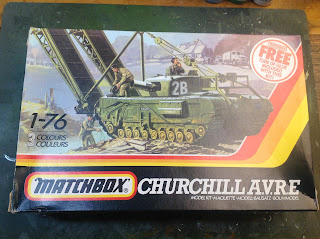 I recently built a 1/72 Churchill, which I wound up modifying with a scratch-built spigot mortar. I then read about and got interested in Churchill AVRE types of all sorts, including these bridge-layers. I posted about wanting this kit on a few sites, and a fellow member of Wisbech IPMS kindly got me one at a show. Thanks Darren! 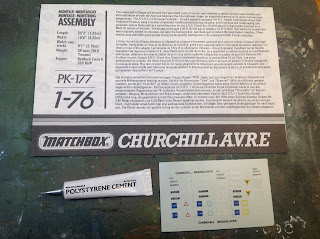 
In the box, which was still wrapped in its original cellophane, was a kit potentially as old as me. The sprues are in three different colours, green, beige and brown. The decals, which I assumed would be fossilised, look like they might be ok. Which, in a kit of this vintage, is pretty amazing. There's even a tube of ancient glue! 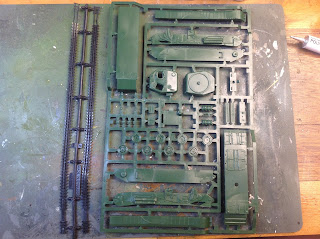 The rubber-band tracks are of a more plastic than rubber material. 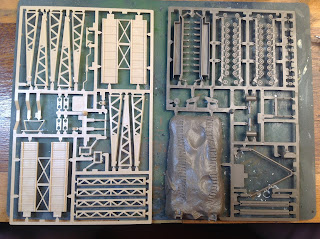 
The instructions start with the bridge. I decided to skip that, and start with the turret. I'll probably do the bridge last. In part because I want to make the bridge workable. The petard mortar is not as nice, in mine 'umble opinion, as my scratch-built one. I've built it as is. But I might want to redo the gun at some stage. 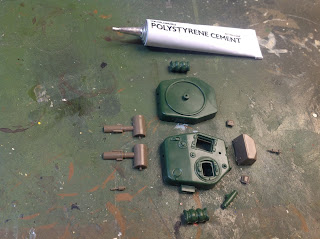 Will the ancient glue still work? 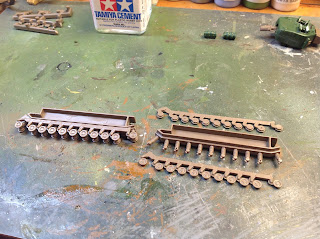 Assembling the running gear, pt. I.


I like the running gear assembly on this kit. Having all the road wheels in a single piece makes it easier to assemble. And the rubber-band tracks in this kit seem to be more plastic than rubber, meaning they actually glue together! 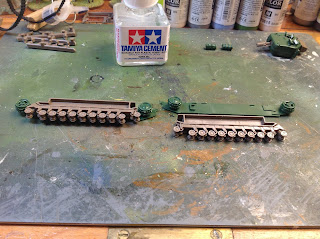 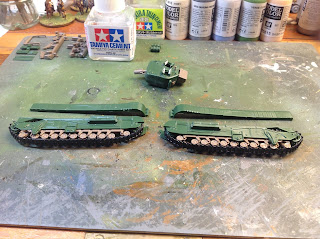 Tracks on, turret with modified hatches.


Tonight I'm stopping at this point, having assembled the bulk of the Churchill body. I already left the two stowed blankets, or tarpaulins , off the turret. I'm not sure whether or not to put the mudguards on over the tracks either. Quite a few AVRE I've seen don't have the upper track guards 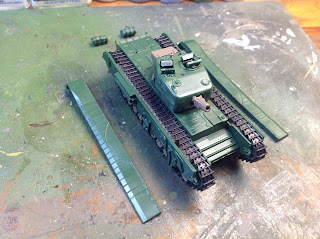 Mostly assembled. Do I add the upper track-guards?