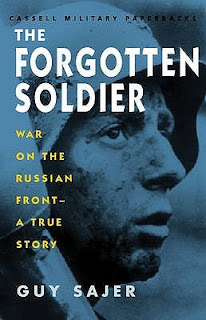 Guy Sajer was a nom du plum of Guy Mouminoux. Interestingly and confusingly Sajer/Mouminoux also worked under the name Dimitri. In the decades after WWII Mouminoux/Sajer/Dimitri was chiefly a bandes dessinées artist, what we'd call a comic book illustrator or cartoonist, whose Rififi character appeared in the Tintin Journal for about a decade, winning its creator a prize 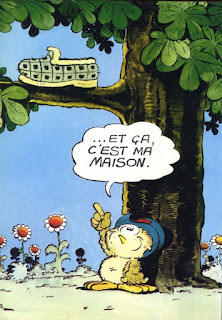 My researches thus far find no mention of his passing. And his most recent work, as far as I know, was the 2000 Kursk, Tourment D'Acier - roughly Kursk, Storm of Steel - which you can read more about (in French) here. I also found a fascinating interview with him, also in French, here, in which he mentions having been in discussion with Paul Verhoeven about filming The Forgotten Soldier. I do hope that film does eventually get made!*

Anyway, as I suspect most folks who might wind up reading this would probably already know, there's been a lot of long-running debate as to whether Sajer's accounts are true, with people coming down on both sides. As already noted, Sajer was in fact a nom de plum, and possibly even nom de guerre as well, for Guy Mouminoux, Sajer being his mother's maiden name; Sajer's father was French, his mother of German origins.

All I can really say is that it all seemed very genuine and convincing to me, and I thoroughly enjoyed reading The Forgotten Soldier. As military history nuts many of us read a lot of non-fiction accounts of war, and this book is like being dropped into the midst of the horrors that such books worst passages describe. Only where they often give us more of an overview, Sajer tells the horror story of his own decade fighting for the Nazi war-machine from within, a minor player embedded in a world of pain and brutality that seems like it will never end.

Gripping visceral stuff, it's also relentless. Sajer, who as mentioned above became a cartoonist after the war, says in numerous places how far short words are doomed to fall from capturing the starkly brutal inhumanity he witnessed and was part of. But, all things considered, and giving him the benefit of the doubt on the veracity front, he does a pretty convincing job of evoking hell on earth on the Eastern front.

An intriguing footnote to all this is that in several interviews in his later years he has said - and more than once - that, despite the horrors and hardships, it was actually a great time in many ways, and a period of his life that he was glad to have lived through and didn't regret. Interesting!

* I discovered during my researches for this post that, sadly, this potential film project was canned.
Posted by Seb Palmer at 22:35