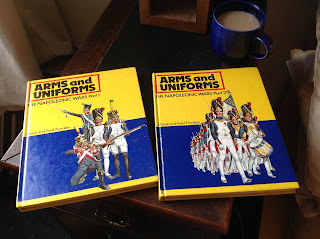 As a kid I'd take these wonderful books out on loan from the Cambridge Central Library, then in the Lion Yard (now the Cathedral of Capitalism known as The Grand Arcade), frequently running up fines, as I held onto them overly long, delighting in the artwork of Liliane et Fred Funcken. 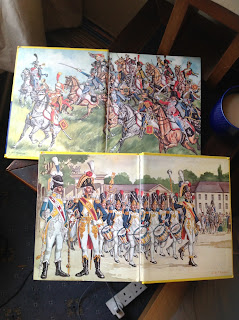 The fact the authors/illustrators were French added to the charm and romance. I'm not sure why, but right from the outset I was more interested in the French, first and foremost, and their allies - especially the crazy patchwork of tiny states that was to become the Confederation of the Rhine - and then the Russians, Austrians, Prussians. 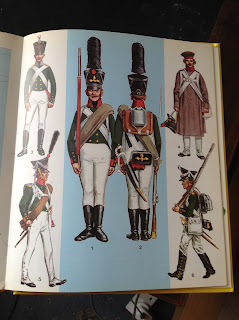 I don't know quite how or why, but from very early on I sensed that the English and their minions were something of a sideshow. And - despite Wellington's role/achievements, or Nelson and the Navy, or even our primary contribution to the Napoleonic Wars, as bankers to the several European coalitions - I still feel this way.

It wasn't until many, many years had passed, including my near enough two-decade break from military miniatures and history, etc, that I bought these fab books for myself, at one of the wargaming shows I now ocassionally attend. I can't recall which show it was - I have a feeling it was Salute - or exactly which seller I got them from. Most likely it was either Lanchester or Meekins. 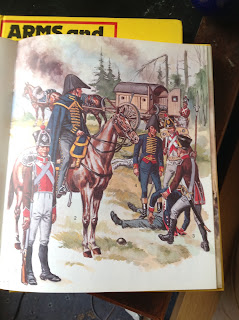 As in days of yore, it's the pics I'm primarily drawn to. Although, unlike when I was a nipper, I do now also read the text. The peacock finery of military uniformology reached a kind of apogee at this point. The Napoleonic era was and remains my favourite for martial attire. And as splendid as these books are - and what a pleasure it is to no longer rack up fines as I endlessly pore over these - I now need to supplement and extend my knowledge, so I have numerous other similar titles, including series like Osprey or Blandford, or collections of particular artists, like Rousselot. 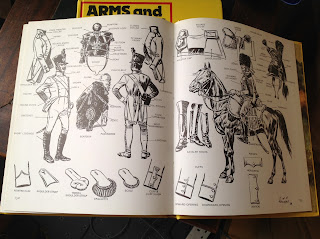 I've also learned that the Funckens worked with Hergé, producer of the fabulous Tintin series, and also a man with an avowed mission to educate youth. In the latter capacity he had the Funckens, through studio Hergé and its numerous projects, frequently producing all sorts of historical material. On one of my visits to the Waterloo battlefields I bought a rather attractive hardback that compiles a number of these works on the theme of Waterloo. It's fantastic. The only drawback is it's in French, and my French isn't exactly tres bon!

However, this post concerns their two Arms and Uniforms titles [2] on the Napoleonic Wars: Volume one covers the French army, including Napoleon and his staff, and everything else except the various formations of the Imperial Guard. Then it goes on to cover the British, Prussian and Spanish armies. Volume two starts with the Imperial Guard, and then moves on to 'Allies of the French' (from Confederation of the Rhine to Italy and Naples, etc.), and the Swedish, Austrian and Russian armies. Unsurprisingly, it's the French army that gets the fullest treatment. [3]

I absolutely love these two books, as they were a powerful part of my early interest in the period. Consequently the Funckens also have a special place on the nostalgia map of my soul! 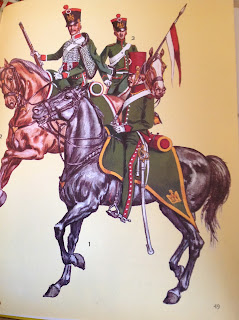 In the foreground, a personal favourite: Eclaireur, 2nd Regt.

[1] There are numerous illustrations of equipment, badges, flags, etc. Mostly in colour.

[2] The Arms and Uniforms series covered everything from the ancients, through medieval, right up to the two World Wars.

[3] As a result of this fuller coverage I've always had a soft spot for certain more obscure branches of the French military machine, from the artillery train, or the medics, to the Eclaireurs. Often based purely on the aesthetics/colour schemes of their uniforms!
Posted by Seb Palmer at 08:09