Off piste, but on track 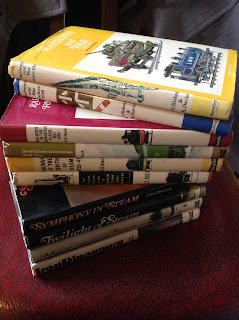 Not sure how to label this post, as it's not so much a book review - although it is prompted by the acquisition of some new books - as it is some random ruminations on a possible new area of interest. 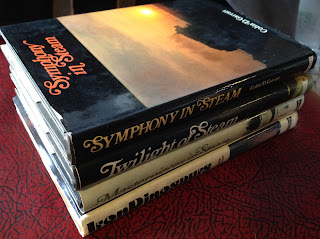 These four are by Colin Garratt, and are illustrated with photographs. 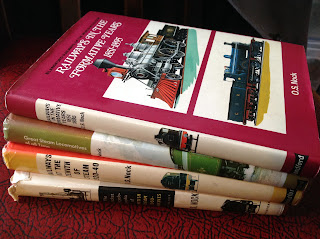 These ones are by O. S. Nock, with hand drawn/painted illustrations.

Teresa, my wife, was watching an episode of Great British Railway Journeys, and the garishly attired (and increasingly bulbous nosed) Michael Portillo was on a heritage line steam train. It was the Bank Holiday weekend, and so, on a whim, I booked us tickets on our local Nene Valley Railway for May Day. In the event, it was so hot we cut our visit shorter than I'd hoped/planned, on account of heat exhaustion. But it was a fun day out, nevertheless. Well, I certainly enjoyed it. The mrs said she did to, though I'm not entirely sure I believed her! 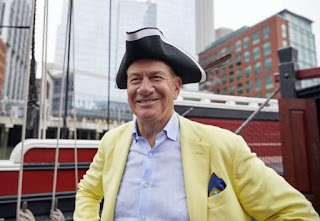 At one point, whilst she failed to take a brief nap in our car, due to it being baking hot in the car park, I perused the second-hand bookshop, suitably located in a converted/parked train carriage. I found a whole wodge of Blandford titles, which I love, very cheap. Included in a 'seven books for £8' bundle was a book on pre 1918 military trains, almost entirely given over to WWI stuff. I found separately another post-WWI title, by the same authors, for £5. After a bit of haggling with the lady bookseller [2], I managed to acquire a very cool set of ten books, all in that lovely old Blandford pocket-hardback style, all on trains, and including both of the two military themed titles, and for just less than a tenner (i.e. all the cash I had upon my person!). 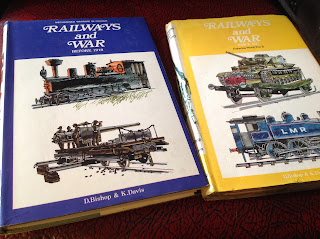 The two specifically military titles, by Bishop and Davis.

I probably will post book reviews on them at some later point. But this post is more about how these books, the visit, and a few other random things, from Portillo on the TV to an old family friend's secretive HO/OO Hornby addiction, are conspiring to foment an interest in miniature - and most probably military - railways. I've always found the logistical side of warfare fascinating. I'd love to learn/read more - and the intro to the WWI Blandford book, which I read in the Nene Valley Railway café, fascinated and further whetted this appetite - on the role of railways in warfare.

Finally, here are some pics from the Blandford books I acquired. Aren't they beautiful!? As an occasional artist/illustrator myself, I was very much seduced by the fabulous artworks in these excellent little books. 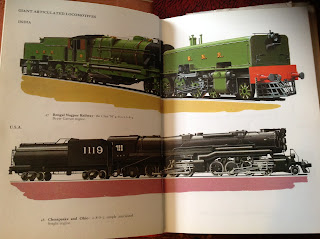 Obviously there are lots of pictures of trains. 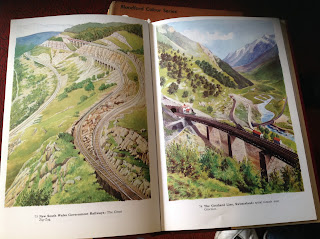 Also illustrated are some of the great rail engineering works of the world. 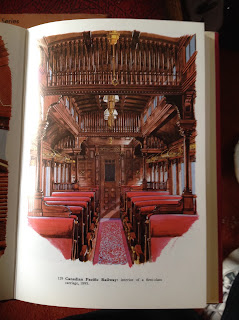 And check this for a swank interior! 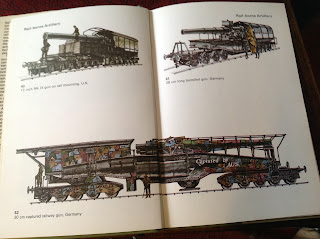 Rail guns from the WWI title. 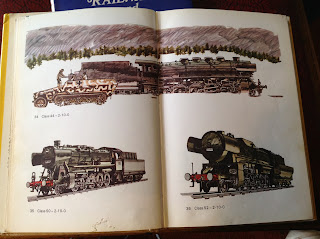 Some of the WWII trains. 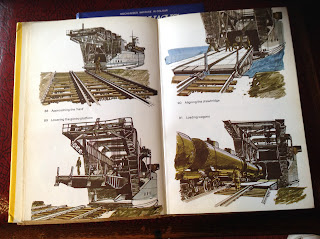 The landings on the European continent involved some serious rail engineering.

[1] Actually pictured here on a boat, not a train!

[2] It felt a bit like making the final purchase on Antiques Road Trip!
Posted by Seb Palmer at 14:26