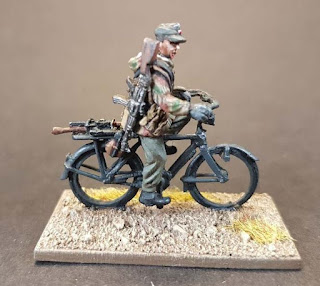 At long last... having had to recently rearrange our lounge, for the umpteenth time, I'm getting back into making and painting my minis! This was why I recently built myself a paint rack, to make space for actually moving my several wargaming projects forward.

Things kind of stalled. At least on the making and painting fronts. For ages! My first project now is to assemble and paint, and, incidentally, I guess, review my only figure purchase from my most recent Salute. And that is this set of WWII German cyclists, by Offensive Miniatures.

The painted examples looked superb, on the Offensive Miniatures stand, at Salute. I also like a lot of the Defenders of The Reich set. I was rather shocked at the very steep price. I paid £22, making these eight 20mm figures, and their gear, £2.75 each. That is, in my view, way too expensive. But I threw caution to the wind, as they were my only figure purchase of the show. 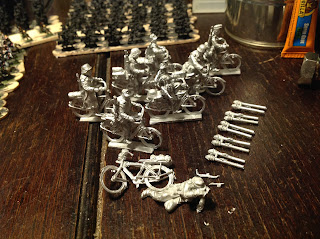 
Before I move on to documenting painting, I'll do a quick review if the figures themselves. Obviously I like them. In fact I love them. So how come they don't get a higher rating? Well, for one thing, they're overpriced, in my view (mind you, so are most metal figs these days). And secondly, a number of parts on my castings are less than perfectly cast. I note that even on the company website some of the bike frames haven't cast entirely successfully. And most noticeable of all, my pointing man figure is sans pointing finger!

Also, as nice as these are, there are some fitting/assembly and pose issues. Getting my riders onto their bikes, and then adding the handlebars so they fitted both onto the bikes and into the riders hands, was pretty tricky and time consuming. And it involved bending stuff. Mostly handlebars, but even bikes and sometimes even hands/arms. I also filed a few hands out, and drilled some of the handlebar mounting holes, to try and get stuff seated and aligned better. 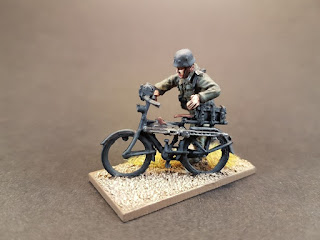 
Finding a decent superglue that actually works for this sort of glue up has also been a pain. In the end I'm using a rather pricey Gorilla brand gel type.

In terms of the poses, they are mostly very nice. Offensive figures are a bit on the stocky side. But then so are most 20mm white metal minis. The two open mouthed figures are my least favourite, in terms of looking natural and realistic. Six of the figures are riding their bikes, whilst one stands to the side of his, and another lies prone, on one elbow, field glasses in his right hand. It's nice that each bike is festooned with a different array of clobber, from blankets and boxes to sundry weapons and other gear. 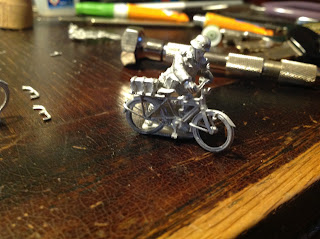 I opted to pose my standing guy differently to how they show him on the OM website. They have him holding the bike lengthwise, by one handlebar and the seat. I decided I wanted mine as if 'pushing off', before mounting the bike. So he's holding the handlebars with both hands - which involved angling the front wheel, etc. (as did the bike laying on the floor for the recce fig) - which involved much jiggery-pokery! 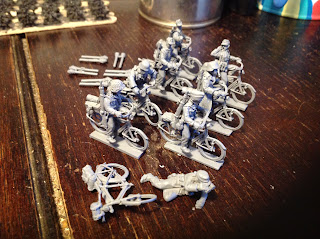 Today I undercoated them in grey, and started blocking in base colours.

[1] I'll probably only use a few of the many panzerfaust supplied with these guys. The rest will go in the spares box, for use elsewhere.