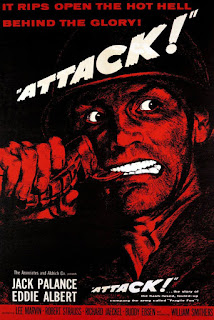 It's 1944, and somewhere near Aachen a platoon of American troops of Fragile Fox company [1] are attacking a German pill-box. Jack Palance plays Lt. Costa, whose 'boys' get badly chopped up by machine gun and mortar fire, their promised support never materialising.

Capt. Cooney (Eddie Albert) is the vacillating, non-committal commander responsible for the debacle. Confronted with a challenge, he simply freezes. Holding his rank by dint of his father's society connections - daddy is a judge (and bully) - his costly failures look remarkably like rank incompetence, perhaps even cowardice. [2] 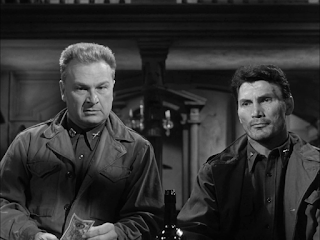 After the initial opening battle sequence, we spend a while behind the lines. Capt. Cooney prepares to receive Lt. Col. Bartlett (Lee Marvin), who he knows from pre-war days, at HQ. A card game with booze and cigars is laid on. Cooney and Bartlett each intend to milk the occasion, laced with Southern bonhomie, for their own careerist ambitions. Cooney wants to win disapproving daddie's approval, by returning home as a decorated war hero; Bartlett seeks postwar office, with Daddy and Cooney Jr. as backers.

But rankling grievances that have been festering just below the surface erupt, and things turn sour. Costa simply cannot contain his anger over the Aachen affair. And it's soon clear that morale in the unit as a whole is close to breaking point, thanks to Cooney's lacklustre leadership. Lt. Harry Woodruff wants Costa to back him up in getting Cooney 'kicked upstairs'. Costa's too jaded to even try. And Bartlett manages to fob Woodruff off, saying that it's 100-to-1 they'll be pulled off the line. 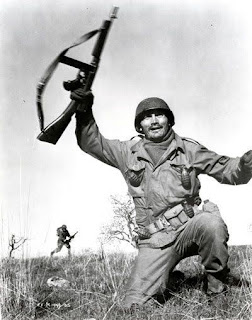 A great still, looking very like a documentary photograph.

Instead, they're caught up in the Battle of the Bulge. Bartlett gives Cooney and Fragile Fox co. the task of taking and holding the strategically important town of La Nelle. Cooney requests Costa's platoon take the key initial position, on the edge of town.

Like the pill-box near Aachen, it's a dirty dangerous job. But Costa reluctantly if fatalistically agrees, telling Bartlett that if the promised back up doesn't arrive this time, and promptly, and if he loses any more men as a result of Cooney's incompetence, he'll come back and shove a grenade down the Captain's throat and pull the pin! 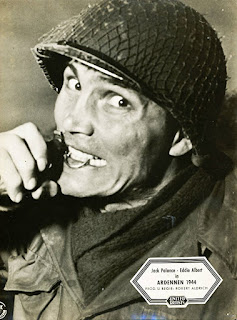 Pulling the pin on a grenade is an image key to the film's pent-up violence.

Well, it's pretty clear what's going to happen. Exactly how it unfolds, however, is very well handled. Palance is just great, so ruggedly masculine you feel he might well be made of granite! Albert is also excellent, as the less than sympathetic Cooney. Marvin, another amazing looking fellow, is also reliably rugged, but with an added layer of viciously smooth careerist snakeskin.


Costa is a man who drives himself over the edge, Cooney one who never finds his footing, and Bartlett cracks the whip, as they teeter on the brink. Amongst the officers only Harry retains any balance and composure. Or does he? The film promoted itself with the tag 'rips open the hot hell behind the glory', and has been described as cynical. Certainly it's not a straightforward 'heroes of America fight and defeat their evil foe' type affair. 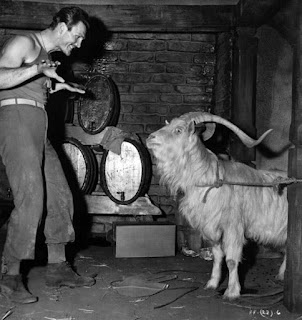 Palance and friend during filming.

Actually I think it's a quite remarkable film. Palance really is great. His character, whilst extremely charismatic, in a homely yet gung-ho way, is damaged by the war. Yet we sympathise with him. Ultimately we may even sympathise with and feel pity for Cooney, who's the wrong man in the wrong place at the wrong time. Desperate to win the approval of a bullying father, but fully aware he hasn't the character to achieve his goal.

What transpires, over several well managed scenarios, is the evolution of this toxic set-up, under the rigorous strains of modern armed conflict. Us war buffs might grimace at the incorrect matériel - in particular the rather poxy looking M3 Stewart Light Tanks [3] standing in for magnificent panzers - but the film is good enough to surmount such limitations. 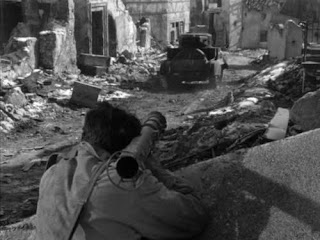 Palance prepare to bazooka a 'Panzer'.

Indeed, whilst on some levels this could be seen as a run of the mill WWII potboiler, in others, it clearly isn't. Palance's performance is almost Tolstoyan in intensity, but with a touch of neo-operatic grindhouse ham. There are some familiar faces, like Richard Jaeckel, and some low-budget workaround shots. But there's also an almost Francis Wolff (of Blue Note records, the famous jazz label) aesthetic to the black and white photography, and the opening title sequence. [4]

And in addition to a gripping well performed story, there's the moral complexity and the compromised systems of values that interplay. The denouement is appropriately messy and confused, much like the fighting depicted. Mixing the homely with the brutally cynical, it depicts a sad reality, in which humanity seems to oscillate under the polar lures of compromise and integrity. 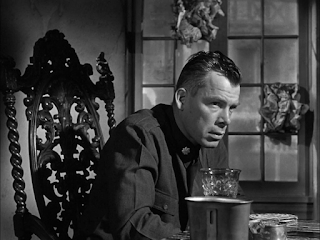 All told, I love this film. Lee Marvin is great, Palance is like some kind of pagan deity in the flesh, attractively primitive and dangerously, combustible volatile, Eddie Albert plays an unattractive role with real vigour and credibility, and William Smithers (who I didn't know prior to this) is the Everyman, trying to fathom his moral compass on the storm-tossed seas of war. Fab! 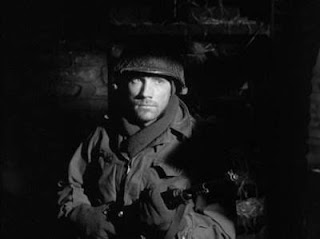 Smithers as Woodruff, the Everyman character.

[1] The film is based on a play, originally titled Fragile Fox.

[2] In fact actor Eddie Albert was a decorated veteran of WWII!

[3] Aldrich had to buy his own tank, and rent another, to make the film, as the US military refused to cooperate in the making of the film.

[4] It turns out it was graphic design maestro Saul Bass who did the superb title sequence.
Posted by Seb Palmer at 21:57