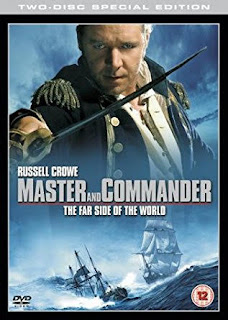 Rollicking good fun. Crowe suits his role perfectly, as Capt. Jack Aubrey - tho' I didn't quite believe in him as a violinist! - and plays it (his role, not the violin [1]) with gusto. Too many modern films sacrifice character and even plot to endless action and special effects. Master and Commander is a near perfect balance of all these things. How refreshing. 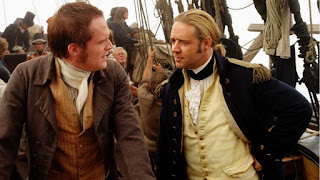 Bettany as Maturin, and Crowe as Aubrey.

Even on board ship, the officer class keep a good table.

As a lover of war films, I feel there are far too few films set in the Napoleonic era (WWII by contrast continues to spawn countless movies). And of those there are, too many are duff. This isn't, thank goodness. I must admit, I really do love the scene that climaxes in the pun, 'One must always choose the lesser of two weevils!' This occurs around the dining table, possible even in the very scene pictured above.

I won't synopsise the plot, as there are plenty of others out there on the interweb who've already done that. 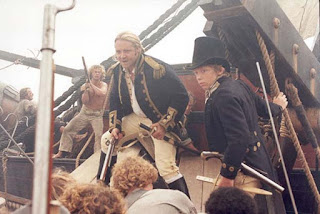 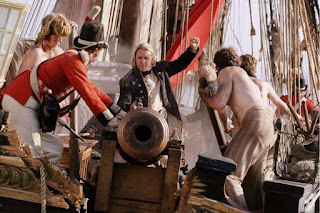 Aubrey lends a hand at the guns. 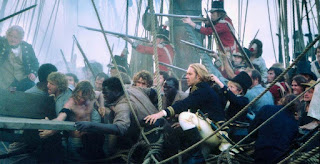 Drawing alongside the french ship, Acheron. 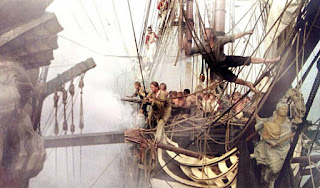 There's a good sub-plot, concerning the ship's doctor and naturalist, Dr Stephen Maturin, exploring his friendship with Aubrey, and the conflicts that arise between personal and professional loyalties. Another sub-plot pertains to the Christian/seafaring superstition of 'the Jonah', a curséd soul whose presence brings bad luck to all.

Anyroad, all told this is a very enjoyable depiction of British sea power in the age of sail. I often dislike CGI heavy productions, as they sacrifice everything to visual thrills (and, to my eye, are often so overdone as to look unconvincing anyway). But that's not the case here. 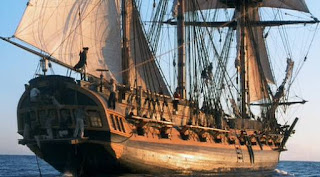 [1] Actually both Crowe and Bettany do a very good job of miming playing their instruments.

[2] Actually a copy of HMS Rose, a sixth rate ship launched in 1757, and actually scuttled before the Napoleonic Wars got underway.
Posted by Seb Palmer at 23:47