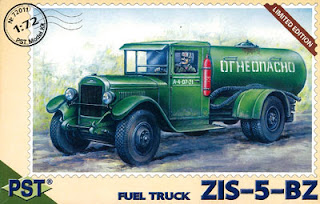 NB This post was originally drafted in February! So it appears out of chronological sequence.

A recent trip to The Muckleburgh Collection in Norfolk resulted in the purchase of a T-34/85, in 1/72, by Trumpeter. Both that and the Muckleburgh trip will be blogged in dew coarse, so to speak. In the meantime, having just built some US matériel, I figured why not some Russian stuff also? Apart from the aforementioned T-34, the only Soviet stuff in my stash is the ZIS-5-BS, under consideration here.

I bought this at a show, poss at Bovington, for a knocked down price - £6, so not all that knocked down - due to it being simply bagged up, i.e. not in its proper box (instead a home-printed version of the box aw - pictured above - had been inserted inside the bag. It was only when I got it home that I realised it also lacked instructions, nor were there any decals. So I kind of felt that I'd overpaid, even tho' 'twas cheaper than the RRP for a pristine kit. 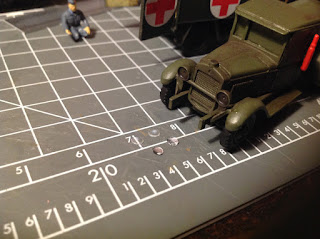 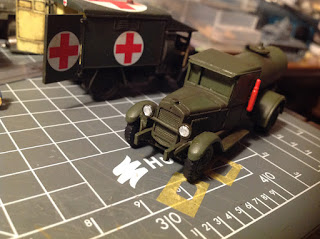 Anyways, this was all some time ago. Digging it out of my stash today, I decided to get stuck in. To do so required finding instructions for assembly, which I duly unearthed at the very helpful Henk of Holland website. These downloads are particularly useful in cases such as this, when not only are the instructions missing, but the parts on the sprues - shown numbered in the instructions - are not actually numbered! So, a bit of rigmarole required before I could even start.

The quality of moulding suggests a small short-run Eastern-European type operation. The kit and instructions were listed under PST on Henk's site. But one of the sprues has AER on it. Whoever made it, it's certainly not of the super-crisp variety, such as the Academy models I've recently been making, and requires quite a lot of clean up. 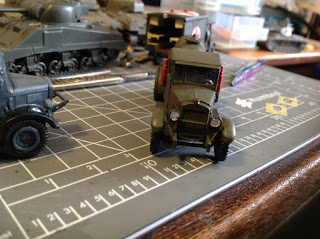 I don't seem to have build pics. Nearing completion.

It's not just removing flash and ejector pin stuff, either. Some of the tires needed sanding, on both external and internal facets, so as to get them properly shaped and onto the wheel hubs. And some parts - most notably the front axle - were just plain wrong. Also there appears to be a single unused/redundant part (not so unusual, perhaps), and another part - the drive-shaft - is simply not included. Instead of supplying a styrene part, mention is made in the instructions of making your own with metal rod.

The two front wheel arches need large appendages removing. And it's not entirely clear what the final shape ought to be. So I just winged it with them, using web ref. Using the suggested piece of styrene for the front axle meant the front wheels couldn't be fitted, as they were obstructed by the front wheel arches. Experimentation finally established a suitable length, and I butchered a surplus part of one of the Academy models to make the necessary longer axle. 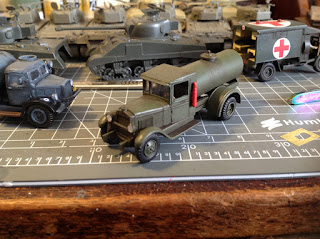 The rear axle was also too short. For this I used some of the same wire I used for the drive-shaft. Once again experimentation and judging by eye were required. All this mucking around with the kit, and improvising solutions to little issues, is, I find, part of the fun of model making. So I don't judge the kit too harshly. As I've doubtless said elsewhere/before, I love all this rear-echelon stuff (oo-er, missus!). So, starting my Soviet war machine with a fuel truck is fine by me. Next, though, I'll do the Trumpeter T-34. I strongly suspect that'll be a rather different kettle of fish!

As usual with my builds, this remains unfinished: the fire extinguishers need some shading, and I need to mask/paint the lettering - as the kit came without any decals (so, number plates are lacking as well!) - on the side of the fuel tank. But, as basic and simple as it looks, I'm actually fairly happy with how this kits turned out.
Posted by Seb Palmer at 22:53