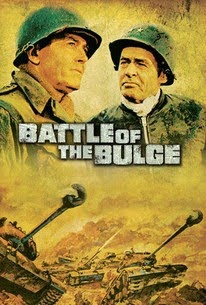 NB - Another in my continuing series of archival posts. Drafted ages ago, but only finished now.

In terms of accuracy of any sort, it's pretty woeful. Only in the broadest of terms - the Germans luanched an offensive that ultimately failed - is it anywhere near the mark. Some of the detail chimes with certain events, such as the SS Malmedy prisoner massacre, and the German attempts to cause confusion behind the Allied lines (by using German troops disguised as Americans) [1]. It's obviously intended - as the original publicity materials, such as the poster below, make clear - to be a blockbuster in the mould of A Bridge Too Far, or The Longest Day. But those films worked much harder to achieve authenticity. And, particularly in comparison to this movie, they succeeded. 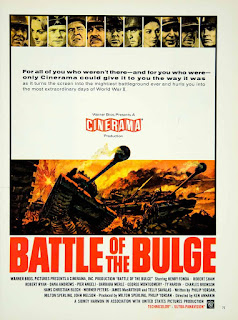 Col. Hessler (Robert Shaw) is introduced to wunderwaffen, the new Tiger. Eh? That's not a Tiger? 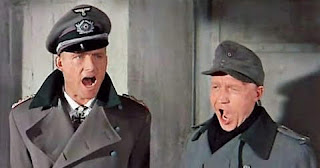 Hessler and his orderly, Conrad (Hans Christian Blech), singing the Panzerleied, with...

It's also hard to watch a film in which not only is the history well off the mark, but the looks of the locations are wrong, and the materiél, in particular the tanks and vehicles of both sides, are wrong. Even the uniforms look too generic. They didn't have CGI back when this film was made, but then neither did the Russian makers of 'Osvobohzdenie' (Liberation), a truly epic five-part film about the counteroffensives on the Eastern Front that puts this lacklustre and innacurate drivel properly to shame. And the Russian's at least had the wherewithal to try to make some of their armour actually look like the Tiger tanks, or whatever else, they are standing in for.

An M3 masquerading as a German half-track.

There are a few films, Battleground, and parts of Band Of Brothers, for example, that cover aspects of the Battle of The Bulge, and do so far better than this movie does, but it remains a campaign ill served by western cinema. Sadly this film doesn't measure up to its own sense of self importance, which ends up making the rather portentous triple interludes - there are three bombastic musical segments, an overture, an intermission, and an exit - seem rather ridiculous. The stark red and black title graphics, as nice as they are, are scant consolation.

Telly Savalas as Guffy, an American tanker with a sideline in black market contraband.

Filmed in Spain, the landscape settings don't quite evoke the Ardennes.

In my view you'd have to be shamefully ignorant of the history of these important events to be taken in by this Hollywood gloss, which comes off more as a melodramatic Western, relocated to WWII, in terms of acting and drama. What a missed opportunity. And what a waste of plenty of decent acting talent. 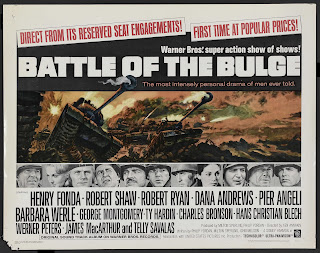 This nice old poster makes the film look much better than it is.

It's quite clear from the older posters that this was cast in the mould of star-studded epics such as The Longest Day, and A Bridge Too Far. It just goes to show that throwing big names into the pot with a turkey doesn't alter the fact it's a turkey.

[1] This latter aspect, however, like so much of the history with which this film should've concerned itself, is grossly misrepresented, in this instance by being hugely overplayed.

[2] Introduced in the 1950s, Cinerama was an attempt by the cinemas to find new means of competing with TV, by offering a more spectacular immersive panoramic viewing experience. But by the time Battle of the Bulge was made it was already on the decline. And this film was shot in a single camera budget version of the format, where the original called for three cameras shooting simultaneously!

[3] This was one of the few scenes I actually enjoyed, as I felt it conveyed well the positive camaraderie aspect of the German war machine, something usually glossed over in big budget war films.
Posted by Seb Palmer at 09:45