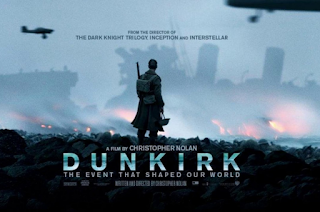 NB - Yet another post written ages ago that I've only now found the time to finish!

If you were to glance at a selection of online reviews you could be forgiven for thinking Nolan's Dunkirk appears to be the Marmite of WWII movies. It's won numerous awards, and a lot of people have rated it five star on Amazon UK. Personally, as a history lover with a particular interest in WWII, I was very excited to hear of a new big-budget film on Dunkirk, an event so poorly served by cinema that it remains ripe for revisiting. And the prospect of something shot on real film, eschewing CGI, made it sound even better.

But sadly, this last hope - specifically that this sounded like it'd be a good film - was a truly and profoundly forlorn one. I saw Dunkirk at the cinema, in its opening week or two. And it was the sound that first began irritating me. Hans Zimmer's soundtrack felt like having a pair of movie studio executives, one in each ear, bellowing 'this is really tense, yeah!?' more or less continuously. I hated this experience with the same kind of visceral loathing that TV advertising and the ubiquity of bland music in shopping environments brings out in me. 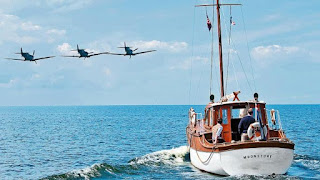 Nolan's film is as flat and empty as the sea is here. [1]

Then, as the film continued - to say progressed or developed would be wrong - almost everything about it started to grate. The overt and implausible lack of speech, never mind dialogue, especially in the crowd scenes; the absence/invisibility of the enemy; the vacuum of humanity where one might hope for characterisation; the lack of context and scale. Under such circumstances even the things that might otherwise have been strengths, and complemented a good film, such as the avoidance of CGI, and the studied visual aesthetic, started to count against it.

Sure, CGI is often crass and obviously fake. But when used well it can help create a believable environment. The tidy, sunny near empty beaches of this film don't tally with the wartime images of Dunkirk's hyper-crowded beaches, littered with abandoned matériel, the sea filled with vessels, and the skies buzzing with hundreds of aerial sorties. And the soldiers nearly all looked way too spruce, not like the weary men actually who actually populated the beach, squeezed against the margins of land and sea, caked in the blood, sweat and dirt of a violent and traumatic rout. Nolan's depiction, supposedly an attempt to immerse the viewer in the Dunkirk experience, captures none of this. 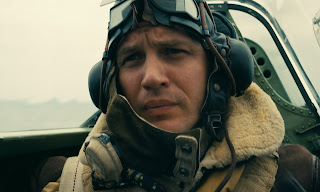 Tom Hardy as Farrier. A good looking guy, sure, but zero charisma in this role.

The director's decision to fragment the narrative - like many of his ideas about film making - sounds interesting on paper. Might it convey the confusion of war? No. It's merely harder for the viewer to connect in any way with what's happening onscreen. Quentin Tarantino's Pulp Fiction is perhaps the amongst the most famous examples of a multiple thread narrative that jumps around chronologically, and yet still tells a strong, involving successful story. In Dunkirk it's just a mess. Apart from a few actors whose faces I knew - and being anchored by celebrity faces, rather narrative or characters, is appalling, working against the film's credibility - I often found I didn't know who it was we were following at any given moment. Where even rudimentary character would've helped engagement, there's a vacuum, a desolate dearth of humanity. 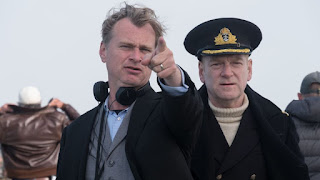 
Apart from Cillian Murphy, I didn't recognise, nor was I drawn in by, any of the younger actors here. The faces I was most familiar with were Mark Rylance and Kenneth Branagh. Rylance was quite engaging as Thomas Cromwell, in Wolf Hall. But his character here seems inexplicably and unbelievably stoical, not in an admirable way, but as if any humanity is simply missing. His is the patriotism of a cardboard robot.

Meanwhile Branagh was - sorry Ken, nothing personal! - his usual irritating lovey self; it's very rare (perhaps only when he does the Woody Allen role in Celebrity?) that I ever see Branagh as the character he's supposedly portraying. It's always Branagh being Branagh, to me. And worse still, he has here an expository role, highlighting the redundancy of his part, and the absence of any real character.


And the soundtrack? Well, once again, the idea is interesting, whereas the execution isn't. Indeed, rather than helping me enter the world of the film, it shut me out. If the idea was to use the soundtrack to terrorise the audience, to scarify them acoustically, I'll grant, Zimmer and Nolan succeeded. With me at any rate. But simply creating a horrible audio experience isn't equivalent to putting one on the beaches of Dunkirk. And if this single 'immersive' element succeeds in any way, it's only at the cost, for me, of destroying the entire experience. From not long after the opening sequence, it was the music/soundscape that I was wishing would end. Before too long, it was simply the entire film. 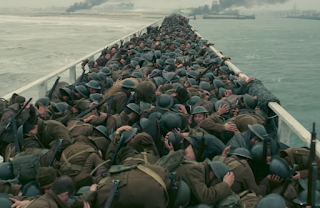 Aerial assault on the mole: numbers are good, but looking too clean.

Although it's a completely different film on a very different subject, I want to compare Dunkirk with the Russo-Ukrainian WWII film Come And See. The reason is that Come And See is also experimental in some albeit different ways, doesn't (as far as I know) use CGI, and even deliberately uses sound in an interesting way.

But whereas almost everything about Dunkirk grates and works against it being a success, in Come And See everything coheres: occasional surrealism helps convey the irrationality of war; the main protagonist undergoes an episode of hearing loss/tinnitus after a bombing raid; and despite elements of disjointed episodic narrative, the whole has a narrative integrity, and oceans of compelling human interest. And so, despite being set in the immense landlocked vistas of the Ukraine, Come And See is far more successfully immersive than the watery seaside setting of Dunkirk, which is an arid desert, devoid of the humanity that might draw the viewer in.

For my Amazon UK review (here), I actually borrowed my title - 'One of most over rated movies of the year and a major disappointment' - from the concluding line of another review of Dunkirk. Like the roughly 40% of reviewers scoring this at only one or two stars (at the time I posted my review, now no longer the case), I was and still am mystified by those who rate this movie highly. I agree with the Sky reviewer who said that in Dunkirk Nolan appears to have pulled of a magic trick worthy of his film The Prestige, by convincing many that his jumble of characterless moments is in fact a film worthy of our attention and admiration. I give this one balkenkreuz for using real film, avoiding CGI, and... ummm!? We'll, that's it. I'm sorely tempted to give it none, on account of my having found sitting through it so excruciating. 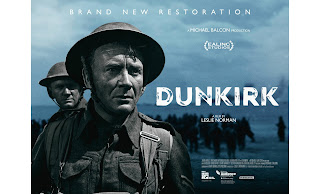 The 1958 film, whilst better than the 2017 movie, is also rather disappointing.

I haven't bought this on DVD, and would probably only do so if I knew there was an option to remove the Zimmer soundtrack, which - given its integral role in the film - I doubt there is. And I very much suspect that whilst such an option might make Dunkirk a more watchable film, for me, it is unlikely it'd make it any better [2].

I'm not that big a fan of the 1958 Dunkirk film, either. The older film is ok, certainly much easier to watch, and in many other ways better than Nolan's film. But it's also too propagandistic, has its share of poor acting (Bernard 'M' Lee, of the Bond films, is very lame!), and, well... just isn't great. The BBC did a strange three part thing for TV, part documentary, part dramatic reconstruction (with a small but good Benedict Cumberbatch appearance), which is also somewhat disappointing. But if you want to learn about the history of Dunkirk, I'd recommend the latter above either of the two cinematic movies.

[1] Shots such as this hardly evoke the celebrated armada of little ships.

[2] Amazingly, to my mind, the godawful noise won two awards!