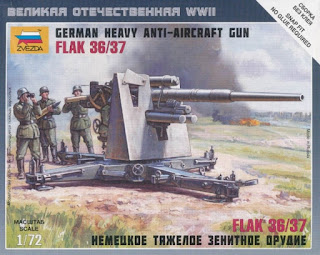 Compared with the rather clunky (but still fun to build) Airfix 88mm, this Zvezda kit is a terrific model. The gun itself is fantastic  - much more solid, and far better detailed - and the four crew are very nicely sculpted. It all goes together pretty easily too. For the money it's a shame they don't include any spare ammo, shell cases, etc. Nor are there either of the transportation bogeys. My recent Academy models have rather spoiled me in terms of extras. 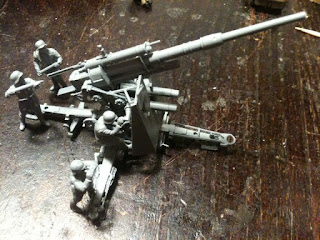 These guns are so cool looking. I saw one on my recent visit to Muckleburgh, and there's also the one at Duxford (see pictures of both below). I doubt I'll do much in the way of extra detailing for this, as it looks detailed enough as is. But the photos I've taken of the aforementioned museum exhibits should at least be good for painting ref. 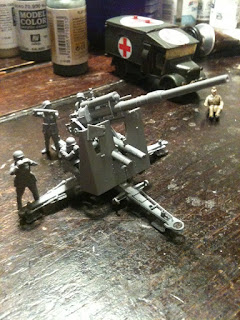 Still unpainted at the mo'!

Moulding quality is excellent, with very little flash, and not much cleaning up required besides the basic snipping and trimming from the sprues. You can leave the rotating parts un-glued, to facilitate movement. The fine detailing does mean that several elements to of this model are rather fragile. I have occasionally replaced such parts with metal/wire on a few models before. But I didn't feel like making the effort on this occasion. 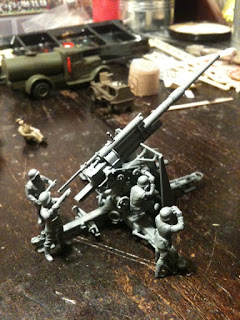 Figures are pretty much perfectly proportioned, in very naturalistic poses.


Here are a few of my reference snaps, from those museum visits: The Duxford example is displayed deployed, in a mocked up bombed out building; the Muckleburgh one is in transportation mode, atop its two bogeys. The Zvezda box art has the gun and crew in early war mode, with greys and grey-greens predominant. I'll probably go with a later war dunkelgelb based scheme of some sort. 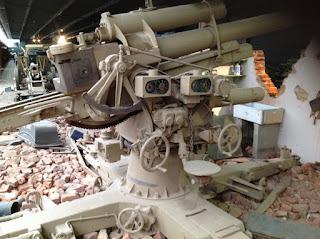 The Duxford 88mm, in a light cream colour. 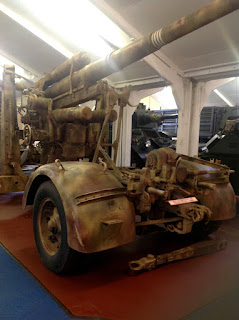 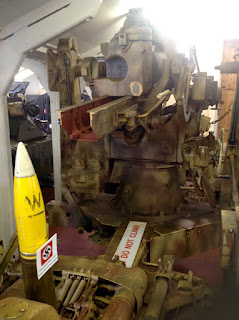 Good view of breech, and also of munitions.

And finally, here's a pic showing the Zvezda and the Airfix 88s together. Another kit I'd like is the Revell one that has the 88mm, plus the two bogeys, and a half-track... like the Airfix kit, only - I assume? - much better quality in terms of details and mouldings, etc. 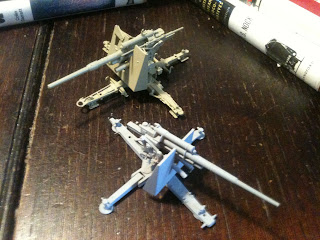 Zvezda at top, and Airfix below.