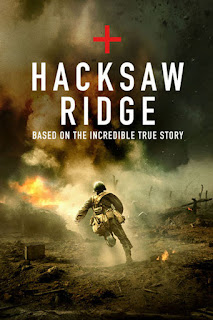 Mel Gibson returns - or comes in from the cold, you might say [1] - with a film that revisits his twin obsessions, Christian faith and bloody gore. Remember his Passion Of The Christ? Well, this is obviously rather different, but Christian faith and ultra-violence are just two of the themes these films share.

The movie as 'true story' is a long favoured formula, and perhaps never more so than in the war genre, with WWII having spawned huge amounts of films 'based on real events'. How close such films steer to the truth, insofar as we can know it, is a moot point. Step forward Gibson's own depiction of William Wallace in Braveheart, as exhibit A. 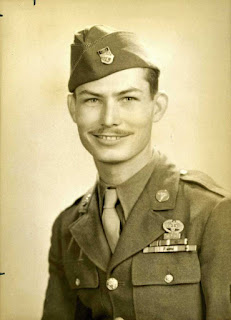 Hacksaw Ridge tells the tale of conscientious objector Desmond Doss, pictured above, who wanted to serve his country in time of war, but without compromising his religious beliefs, specifically 'thou shalt not kill'.

Doss' story certainly makes for a gripping film in Gibson's capable hands. By turns both homely and epic, it is also certainly hugely cathartic, in its depiction of the triumph of one man's convictions in the face of both the psychological and institutional opposition of his own army on the one hand, and the physical weapons and soldiery of the 'banzai' era Japanese Imperial enemy on the other.

Ironically, perhaps, in the light of director Gibson's statements, re this film being about real heroes, as opposed to spandex-clad superheroes, Andrew Garfield, who plays Doss, achieved super-stardom as just such a superhero, Spider-Man! But in this role Garfield overcomes his pretty boy Hollywood star status to deliver a very involving and moving performance. 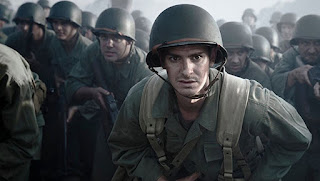 Garfield is very convincing in the role of Doss.

Hugo Weaving* depresses everyone with his grim WWI reminiscences.

Hugo Weaving is great as Doss' damaged WWI-vet father, and Teresa Palmer [3] is fine (in every sense) as his sweetheart and war-bride. Indeed, there are strong performances from all concerned. Until seeing this film I always found Vince Vaughan too one-dimensionally macho. He's cast here according to type, as Doss' Captain. But he plays his part well, and at last achieves some more rounded humanity (at least in my eyes).

For us war film buffs this is yet another instalment of 'Americans in the Pacific' - the Yanks [4] seem to favour this more all-American theatre of the war [5] - but it's done superlatively well, and focuses on an action I don't believe I've seen depicted (unless it features in HBOs Pacific?) before. The terrain fought over is pretty extreme, fully deserving of the brutal sounding epithet that gives this film its name. 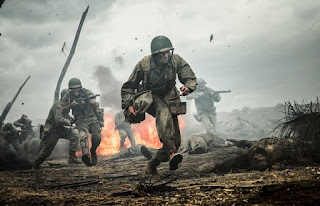 The paradox of the bravest soldier being the one without a gun. 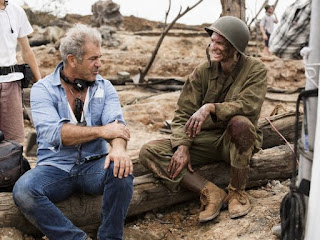 Gibson and Garfield on set during filming.

At the heart of the story is the idea that the apparently paradoxical soldier-without-a-weapon might be the bravest man on the battlefield. And the catharsis of seeing a man successfully stand by his convictions, in the face of seemingly insurmountable odds is very powerful. I don't think you need share either Gibson's or Doss' religious views to understand and admire that.

Is Mel Gibson a racist, misogynist, religious crackpot? Certainly he's been portrayed that way, allegedly in his own words, by the media. I don't know the truth of those allegations, and have never looked deeply into it. Is Hacksaw Ridge a terrific film that tells an amazing story? That I can attest to. Yes!

* Better known, perhaps, as Elrond in LOTR, or Agent Smith, in The Matrix.

[1] It's ten years between this and Apocalypto, his previous film as director. And in the meanwhile there's been much controversy over his personal life and views.

[2] At first his hillbilly accent annoyed me a little. The Americans seem to treat a Southern accent almost as shorthand for an honest-to-God, salt-of-the-earth nature; a little dumb perhaps, but genuine. But it does also happen that Doss was a southern boy.

[3] And I never knew that my wife had a career in Hollywood!

[4] Gibson is often thought of as Australian. But he was born in New York, and is American. And even if he weren't, despite his troubled episodes, he's as good as Hollywood royalty these days. And besides, this is obviously an American story and film!

[5] Of course Commonwealth forces also fought in the Pacific. But compared with the European theatre, the Pacific was much more an American 'show'.
Posted by Seb Palmer at 20:43